Boeing’s inaugural flight of the 787-9 was originally scheduled for 10am Pacific Time, but as is usual for ’œBoeing Time’ there was a few delays.  The weather may not have been as perfect as the flight tests for yesterday’s CS100 flight from Mirabel, but there was no rain, which is always a positive for Seattle this time of year.  With over 10,000 employees in attendance and lots more of the Everett flight line crews watching (plus thousands more watching the live webcast), it was a spectacle that many were anxiously awaiting. 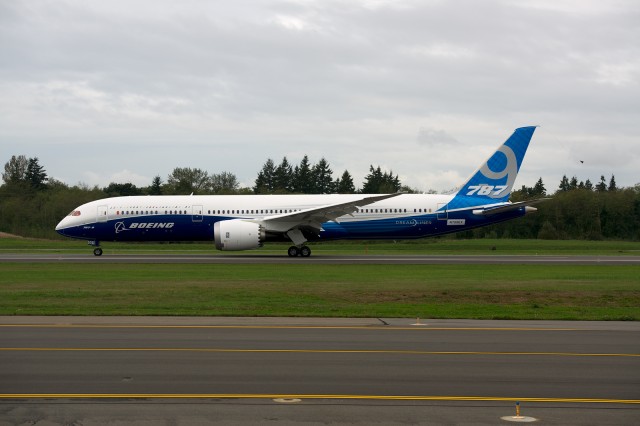 The 787-9 taxis at Paine Field prior to its first flight – Photo: Bernie Leighton | AirlineReporter.com

As the 787-9 powered out of the flight line stall at 10:30am, it taxied north along the main runway to the hold point at the south end of Paine Field.  As it passed the crowds on site, there were a lot of comments about how much more proportionate this aircraft looks compared to its little brother, the 787-8 (the -9 is approximately 20 feet longer than the -8 variant).  The aircraft has to wait its turn to depart and conduct final testing, as unfortunately there was some traffic blocking the way (a small twin Cessna held up the proceedings a little while it taxied to a run up bay).

Then there was more waiting for the Boeing chase planes to arrive after their short flight from Boeing Field.  Once they were on station and ready for their duties, the 787-9 was cleared to the runway and was soon powering into the skies.  As the Rolls Royce Trent 1000s powered up (not all that loud thanks to the Chevrons on the engine nacelles) the aircraft lept into the skies at 11:02am, becoming the first new Boeing wide-body to fly since the 787-8 in December 2009. 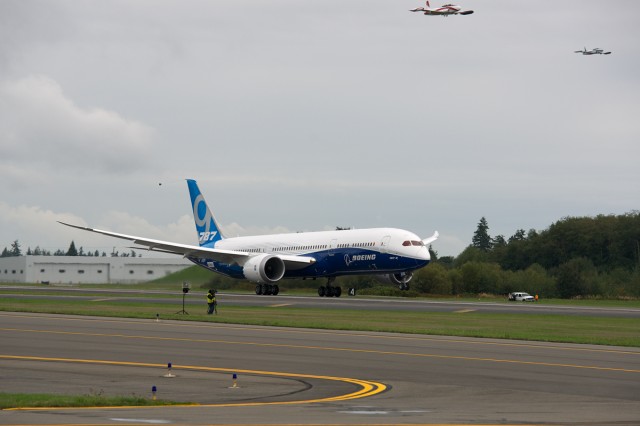 As the aircraft climbed out, it made a left turn towards Puget Sound.  The flight plan has them listed to finish up the first leg at Moses Lake in Eastern Washington before heading back to Boeing Field, just south of Seattle, where it should land about 3pm this afternoon.  With this first flight, Boeing will begin the flight test program for the 787-9, utilizing a total of 3 aircraft.

With the 787-9 expected to be back at Boeing Field by 3pm today (though this may be delayed due to the late departure), stay tuned for more tweets (@airlinereporter) and coverage while AirlineReporter.com is present for the landing and post-flight press conference. 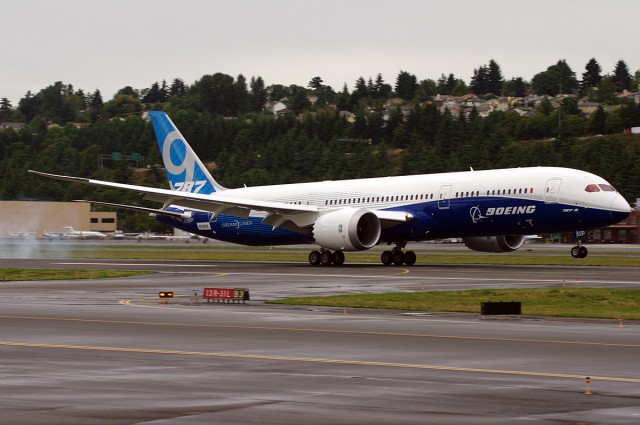 At 4:19pm this afternoon, ZB001 returned to Seattle’s Boeing Field, completing its maiden flight.  After almost five and a half hours flying, the first 787-9 touched down in front of a crowd of VIPs and media before a post flight press conference was conducted.

Video above is from Boeing.

As the crowds and media waited in the afternoon weather (there was a bit of rain prior to the 3pm expected arrival), a number of business jets and other smaller aircraft were in view to keep people distracted.  As the arrival approached, a Boeing P-8I Poseidon, destined for the Indian Navy, caused a false alarm as many people (including Boeing staff) mistook the arrival for the 787-9.

As the 787-9 approached, it was escorted by two T-33 Shooting Star chase planes (and also a UPS MD-11F which touched down mere moments ahead of it).  As the 787-9 landed, the crowd was ecstatic.  When the newest Dreamliner returned to the Commercial Aircraft Test Facility, located at the northern end of Boeing Field, it was powered down and then towed to the stands in front of a cheering crowd.

The test crew, Captains Mike Bryan & Randy Neville, disembarked the aircraft and, after posing for a few photos, took the podium for a brief press conference.  With the first 787-9 acting as a backdrop to the event, the crew described their experience and also how they felt about today’s first flight.  ’œWe really shook out the plane and it went great,’ said Captain Mike Bryan, Engineering Project Pilot for the 787.  ’œIf we had 5 more hours of fuel we would still be up there.’ 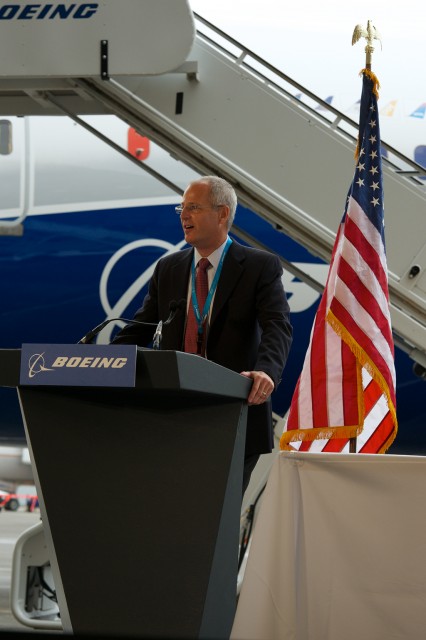 “Today’s first flight marks a significant milestone for our team, including our partners,” said Boeing Commercial Airplanes President and Chief Executive Officer Ray Conner. “We are tremendously proud to have our customers fly the 787-9 and look forward to delivery of the first airplane to Air New Zealand next year.”

With the completion of the 787-9’s first flight, there isn’t much rest ahead. The test crews will go over all the data collected during today’s flight and then inspect the aircraft tomorrow, and they expect to be back in the air as soon as possible.  ’œWe have a busy flight test schedule,’ said Chief Model Pilot on the 787, Captain Randy Neville. ’œWe are Anxious to get going.’ 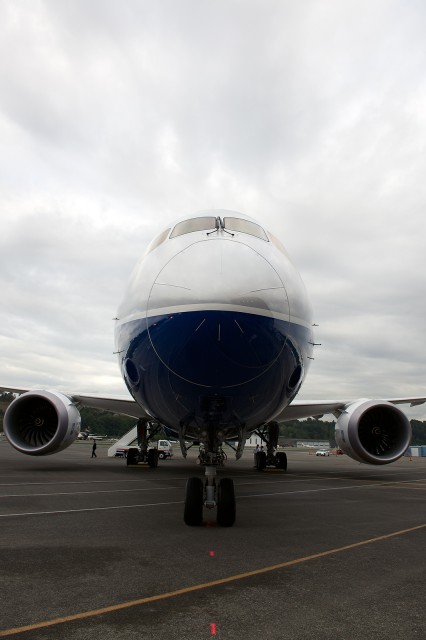 The nose of the Boeing 787-9 Dreamliner. Photo: Bernie Leighton | AirlineReporter.com

Both Malcolm Muir and Bernie Leighton contributed to this story.

It does look more proportioned than the 788, except for the tail. I think the tail is a little smaller looking. Maybe it’s the paint job. All in all, great looking airplane and wonderful article!

The total flight time was about five hours fifteen minutes, if you do the math.

You are correct on both counts. The time and that I can’t do math.