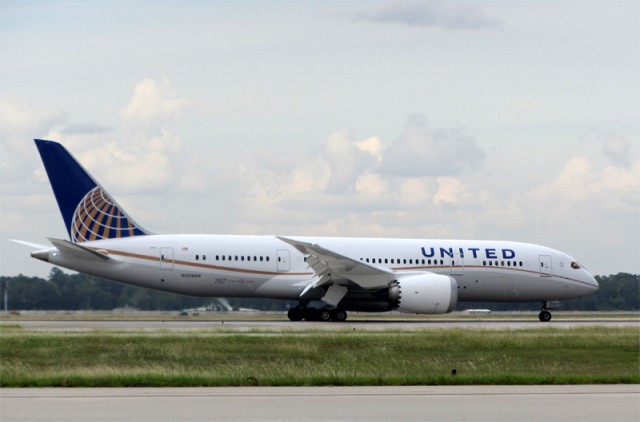 More than one hundred days after the FAA grounded the 787, United Airlines flew their first post-grounding 787 flight from Houston to Chicago on May 20. More than 200 passengers, including executives from both Boeing and United, made history as they spent part of their day cruising at 41,000 feet and at a Mach speed of 0.85 on United flight 1 to mark the return of United’s Dreamliners.

On September 22, 2012, United Airlines quietly took delivery of their first Boeing 787 Dreamliner, and, six days later, they ferried it to Houston, Texas where a large crowd of employees and local journalists joined to celebrate United’s dream come true.

However, United still had to receive certification from the FAA to fly passengers. It was a long five weeks for United as they conducted safety drills, practiced aircraft servicing, and flew several proving runs to Amsterdam, Chicago, Denver, Los Angeles, Newark, San Francisco, and Tokyo. United’s second 787 was delivered on October 31 which was several days late as Boeing experienced delays. United had to scrub several 787 flights due to the delay.

https://www.airlinereporter.com
Flying on an Air Koryo Ilyushin IL-18 in North Korea
Follow AirlineReporter.com — Self Promotion Can Be a Good Thing
3 Comments

Wow this was a very in-depth article! I’m so happy to see this magnificent bird take flight once again! I can’t wait for my opportunity to fly on one.

Love the use of Houston, TEXAS. Thank you for reminding us where Houston is.

John, the site has a very strong global readership and not everyone knows where Houston might be located. So it does seem to make sense.