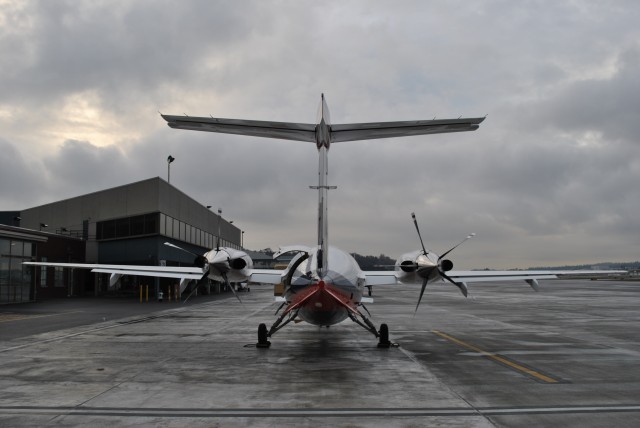 She looks as good coming as she does going. Image by Colin Cook / AIrlineReporter.com.

Arrow has selected quite a distinctive aircraft for their new service ’“ the Piaggio P 180 Avanti II. Looking at the plane, one immediately notices the propellers are facing to the rear. The aircraft is often mistaken for being the Beechcraft Starship with their similar layouts.

This technology enables the aircraft to move quite quickly for a propeller driven plane, reduces turbulence, and makes for a quiet passenger experience. The continuous curvature of the fuselage, starting from the very front, actually provides about 20% of the lift which enables the wings to be smaller. Smaller wings ultimately reduce turbulence which is of course a big win. So even though you are flying in a small plane, we encountered very little turbulence on our flight. 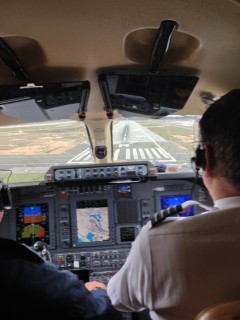 Fun Fact: We should expect such distinctive design from Piaggio given its Italian heritage. Oh, and Piaggio is owned by Ferrari. The largest operator of the Avanti is the Italian Air Force who uses it for various uses including utility transport operations. If you’ve got a cool seven million dollars, I’d highly recommend adding this plane to your collection!

I asked Mr. Belden why they selected Piaggio and he told me this really was the best option for their planned services. The Avanti II is a very efficient aircraft, burning roughly 100-120 gallons (800 pounds) of fuel per hour. Compared to similar sized jets, this represents approximate 30% improvement. Not only is this aircraft highly efficient, but it can certainly keep up with many private jets.

Our cruising speed was around Mach 0.68 or nearly 500 miles per hour. Even though we had a 70 MPH headwind on the way to California, we still made it in just over two hours. And the return flight was a mere 90 minutes — not bad. Combine that with a comfortable cabin and a quiet passenger experience and you have an aircraft that Arrow believes is destined to succeed.

Part of their allure is treating customers like they are rock stars. Rather than needing to be at the airport some 60-90 minutes before a flight, Arrow only asks their passengers to arrive 10-15 minutes prior to departure. But that’s not the only way they save time for their clients. Say you need a rental car or town car at your destination? Arrow will have one waiting for you on the tarmac outside the plane.

One might notice that the colors chosen for the new airline (yellow and black) and the font might look familiar with another Seattle-based small carrier: Kenmore Air.

With a limited number of Air Carrier Certificates and the lengthy process required to obtain one, Arrow has hired Kenmore Air to operate their new service. The planes will still have the Arrow branding, but Kenmore will perform maintenance, operate the service, and the flights will have the Kenmore call sign. 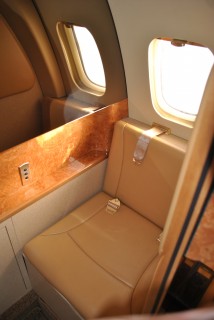 You might want to try and use the restroom before take off.

As far as pilots, Kenmore Director of Flight Operations Thomas Tilson told me that depending on overall demand, they will utilize a 50/50 mix of existing Kenmore pilots and also hire new ones. This is also not the first time that Kenmore has helped other airlines get off the ground (pun intended).

“We get approached all the time,” Tilson explained to AirlineReporter.com. “Kenmore has done multiple contractual and theoretical planning analyses for companies around the world. We really specialize in turn-key planning efforts. Kenmore really is the world’s authority on float plane operations and translating that success to other areas of the world. For example, we have done planning for operations in China and other places in Asia and South America.”

If this route succeeds, Arrow will begin promoting a LA Area to Bay Area service. Similarly to using two less traveled airports in the Bay Area, they are planning to fly into Long Beach and Burbank in the LA area. Future target markets will be big cities that are 300-800 miles apart as they determined that distance really allows for maximum profitability. If they have success on the west coast, they are considering future city pairs of Boston/Washington D.C., Chicago/New York, and Atlanta/Miami among others.

While Arrow will fly into some lesser traveled airports, they are certainly flying into large markets. In another time saving measure, rather than having to taxi to the main terminal after landing, they have contracted with the local Fixed Base Operator (FBO) to handle their aircraft. The FBO will essentially handle all ground operations for Arrow including fuelling, catering, and rental car services. The other nice part is that generally speaking, Arrow won’t have to queue up and land on the main runway that major carriers must use. For example, Oakland has two runways designed specifically for small aircraft that are located near the FBO. 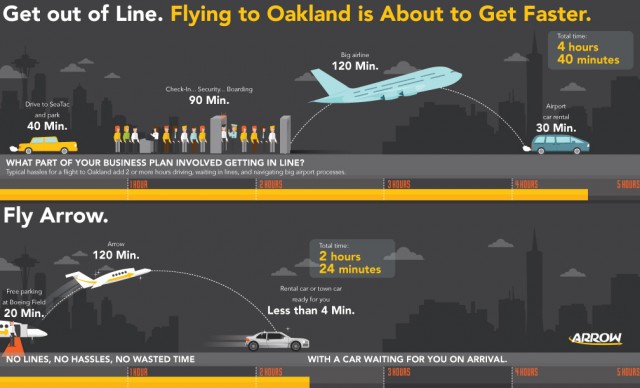 The biggest challenges facing Arrow will come from established carriers already serving the markets which Arrow enters. While they will not have nearly the capacity that many other carriers have (the Avanti II will be configured to seat nine), Arrow still poses a threat to win business travelers with their superior product.

After experiencing their product this week, I wish them nothing but success going forward.

Wait until you hear one flying over, they sound like a sewing machine on steroids…

Avanti is quite a unique aircraft, but it is by no means quiet as Ken mentioned. Also, the graphic is a bit over the top with 90 minutes in line/A380 flying the route.

This model has been tried and failed before many times. It will be interesting if limiting it to just the west coast will make any difference, but I am guessing it won’t. Not many would want to pay such a premium ($6000 up front before even getting tickets) to get in the club and then only be able to fly on a couple of routes.

On the merger theme – I guess Alaska is the only one left? And they are both in Seattle 🙂

It may not be particularly quiet from the ground. But it was certainly very quiet inside the cabin while we were cruising.

I love hearing the P180s around SJC. Cheers to another P180 operator!

“Smaller wings ultimately reduce turbulence which is of course a big win.”

Not really. The turbulence you encounter when flying is due to the movement of the air you´re flying through. The size and shape of your wing does not impact that in any significant way. Think of rafting down a river: some parts are smooth as glass, other parts (the rapids) are highly turbulent, but none of that is affected by your raft.
I suppose having smaller wings could reduce the rolling moment if only one side of the plane is hit by a gust, but other than that it won’t have much effect.

sup, b?, from Hidden Hills, California I want to tell you, I loved this post. However, it is amazing how I ended up on your article. I searched for party bus texas on Google and ended up on your website. I must say I do like your site and will check back soon. But I need to find the limo I was originally looking for first. Have a fantastic day! godspeed.

But you didn’t answer the all important question. Is the alcohol free and is there a pretty lady to serve it to you?

I love those floor tiles! They are super cool and mesmerizing, esapeiclly the black / white one.If I can make a suggestion, maybe make the collision boxes of the shrubs and rocks smaller? I keep running into them when it doesn’t look like I will, and I can’t get through gaps of 1 vertical block height.