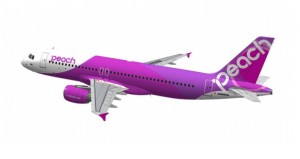 The airline has three major share holders: All Nippon Airways (ANA), Innovation Network Corporation of Japan and the First Eastern Investment Group. Although ANA holds a slightly larger share than the other two investors, I am told the airline will operate independently from ANA.

According to the airline, the name “Peach” was chosen to symbolize energy and happiness across Asian countries. ’œThe name Peach was chosen to reflect our mission of becoming a completely new type of airline that links destinations in Japan and Japan with Asia,” Peach Aviation CEO, Shinichi Inoue stated. “Our promise is to provide safe, low cost travel 365 days of the year, making air travel easier and more accessible. Our airline will also reflect the smart sophistication that has come to represent the words ‘Cool Japan’.”

Although the name might be “Peach,” their livery will be made up of purples and pinks. The colors are supposed to represent “cuteness, coolness and happiness.” Okay, we can go with that. At this point, the airline only has graphical representations of the livery, but an airline spokesperson said we should be able to see the livery an an aircraft sometime in the fall. The airline planes to lease brand new Airbus A320 aircraft in an all economy 180-seat configuration. 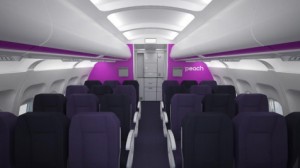 You might not realize that P.E.A.C.H. is also an acronym. According the website it matches up to the type of experience you should expect: Pan ’“ Asian, Energetic, Affordable, Cute & Cool, Happy.

The airline explained to me over email that they,  “are targeting a wide range of people, but much of our focus is targeting young females.”

EDIT: I had originally stated Peach would be Japan’s first Low Cost airline, that is incorrect, I have updated the story. Thanks.