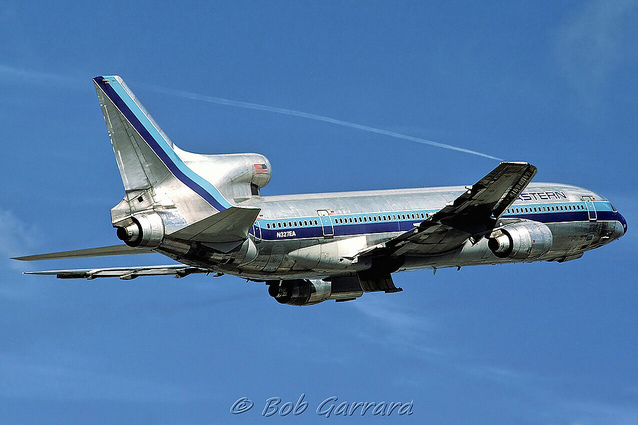 This post was written by Vinay Bhaskara with BangaloreAviation.com for AirlineReporter.com:

Eastern Air Lines was a pioneering carrier in the history of American commercial aviation. Its many historic achievements include launching the concept of a shuttle service between New York, Boston, and DC, as well as launching the Airbus A300 in the US market. However, thanks to gross mis-management by airline industry super-villain Frank Lorenzo, Eastern Air Lines sadly shut down on January 19th, 1991, making 1990 its last full year of operations.

In honor of the anniversary of Easternâ€™s passing, Iâ€™d like to share some interesting statistics from Easternâ€™s last full year of operations in 1990.

Part of a January 1991 Time table for Eastern Air Lines. The airline wouldn’t make it past the month. Image from Chris Sloan / Airchive.com.

Over the course of 1990, Eastern Airlines carried 22.09 million passengers on 279,793 scheduled flights, or an average of 60,536 passengers per day on 767 daily flights. On average, each flight carried around 79 passengers. Eastern offered a total of 38.25 million available seats. Thus Easternâ€™s system wide seat load factor was 57.8%. When compared to todayâ€™s bone-crunching reality of close to 90% load factors this may seem like a better option, but remember Eastern was losing tons of money at those loads. System wide, Eastern served 94 destinations, including 27 international ones (as well as San Juan and Ponce in Puerto Rico).

During 1990, Eastern operated 5 aircraft types including the Boeing 757-200, the McDonnell-Douglas DC 9-30, the McDonnell-Douglas DC 9-50, the Airbus A300 B4, the Boeing 727-200, the Douglas DC 10-30, and the Lockheed L1011-1 Tristar. The DC 10-30s were solely operated on the Miami-Rio de Janeiro flights, while the Lockheed L1011s were operated throughout the system on high volume flights between the Northeast, Miami, Atlanta, California, and San Juan, as well as between Miami and Bogota, Lima, and Guayaquil in South America. The 757-200s operated around 89 flights per day, while the DC 9 fleet operated more than half of the total number of flights with around 390 per day. The A300s operated around 38 flights per day, while the 727s operated close to 230 flights per day.

note: all figures approximate and are from the Dept of Transportation.

By far the largest operational base was Atlanta, which had 104,927 departures scheduled, around 288 daily departures. While this may seem small today given Deltaâ€™s 1000-plus flights per day hub in Atlanta, at the time, it was one of the largest airline hubs in the whole world.

For the year, Eastern carried 16.50 million passengers through its Atlanta hub, representing 74.7% of their total passenger base. Capacity-wise, Atlanta represented around 72.3% of Easternâ€™s total available seats, and Atlantaâ€™s seat load factor was slightly higher than that of the overall network at 59.7%. From Atlanta, Eastern served 68 destinations, 4 of them international (plus San Juan, Puerto Rico). Perhaps the weirdest destination that they served was Gainesville, Florida with Douglas DC 9-30s and DC 9-50s, which today lacks mainline service. Below is a route map of Eastern Airlinesâ€™ service from the Atlanta hub:

Eastern also had a large Latin American gateway in Miami. After it shut down (along with Pan Am â€“ the other big Miami operator), both American Airlines and United (to a limited degree) moved in to fill the void in Miami and serve the strong ethnic demand between Miami and Latin America/the Caribbean.

By 1990, Eastern Air Lines once robust hub in Miami had shrunk to serve as primarily an origin and destination (O&D) base for service to Latin America. They operated just 40 daily departures and served only 11 domestic destinations: Atlanta, Boston, Chicago, Los Angeles, New York La Guardia, Newark, Orlando, Philadelphia, Palm Beach, San Francisco, and Tampa (as well as San Juan, Puerto Rico and Toronto, Canada). But it was still a powerhouse gateway to Latin America, serving 23 destinations. The route map for the Miami Latin American gateway is shown below:

Over the course of its long history, Eastern also had hubs in Charlotte, New York JFK, Kansas City, New York La Guardia, and San Juan, as well as large focus operations in Chicago, Orlando, and Tampa. But by 1990, these had all been reduced to mere â€œspokesâ€ in Easternâ€™s network.

An airline that had been the world’s largest in the mid 90s had shrunk to a shell of its former glory. But despite the financial troubles driven by a decade of mismanagement, Eastern’s network was actually very well designed. Much of its network out of Atlanta was later replicated by low cost carrier AirTran Airways in the shadow of the Delta behemoth. And its vacated routes out of Miami formed the basis for American’s new Latin American gateway that today is perhaps its strongest hub.

David, I would have liked to have seen more analysis of the maintenance technicians strike and whistle blowing on Eastern’s demise but otherwise job well done.

My wife still has her last pay check from the EAL res center at SLC. It’s stamped “Returned for lack of funds”.

Good article except you left out info regarding the screw – up’s by Frank Borman. He had a good name for himself at NASA, but that did not translate to good management at EAL.

As far as I understand Eastern did never flight to CCS

EAL did fly to Caracas, Maiquetia airport. I flew a couple of trips on the 1011.

my name is steven peppers,I worked at eastern airlines and have no way to recover my certifacation that I had with eastern.is there anyone out there with the same problem? or anyone that knows what I can do.sbpeppers@yahoo.com/678-539-7895.

office was located in the top of easterns maintanence hanger. just off virgina ave.

I was Senior Agent for many years at Gainesville… Our station was non-contract, meaning that we did not have the onerous work rules that the unions foisted on Eastern over the years. As a consequence, GNV was consistently in the top 10 most profitable stations on the entire Eastern system. We had 727’s and for a short time 757 service out of GNV to both ATL and MIA. Eastern was destroyed by personality conflicts at the very top of union and management, deregulation and skyrocketing fuel prices.

PHL was also a focus city for Eastern in the late 1980’s. They operated every gate out of Terminal C, except for one gate they shared with Midway Airlines. http://articles.orlandosentinel.com/1986-10-17/business/0260260056_1_new-philadelphia-philadelphia-hub-new-service

Just a quick update on the Gainesville, FL route – GNV was one of the top 10 most profitable cities EA flew to for many years because of the lack of unions, high load factors, high fares and very low fuel prices. For a time EA overnighted up to three aircraft and became a 24 hour operation for cleaning aircraft inside and out. It was a well run operation.

I miss Eastern Airlines.If they and Pan Am survived, that along with the American Airlines hub in Miami would made Miami the only 3 airline hub in the US at the time.

When did Eastern discontinue it’s Miami to Los Angeles flights?