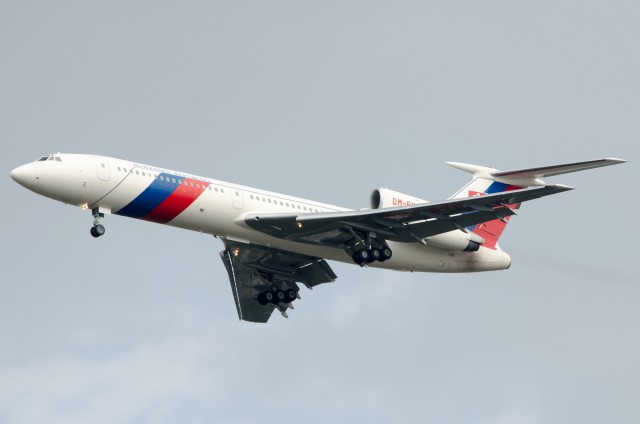 Last week, a chapter of Soviet aviation has been closed forever. Over 40 years after its entry into service, the final Tupolev Tu-154 has been delivered to the Russian Defense Ministry, according to Russian news agency RIA Novosti. Although full production ceased back in 1997, the Tu-154 remained in limited production for quite some time, with a final total of over 1000 airframes produced. The first Tu-154 was delivered to Aeroflot on February 7, 1972.

The Tu-154 was the last of the commercial ’œtri-jets’ in production, outlasting popular aircraft such as Lockheed L-1011 Tristar and Boeing 727 by several decades, both of which saw ther last deliveries in 1984.

Designed to be the workhorse of the Soviet aviation industry, flying into some of the harshest airfields in the world, the Tu-154 went places other jet powered aircraft of its size could not. With its oversized landing gear, the Tu-154 was even able to land on unpaved runways.

Contrary to popular belief, the Tu-154 was not an unsafe aircraft. According to the the Aviation Safety Network, the Soviet built aircraft has been involved in 110 serious incidents, 68 of which resulted in a hull loss, 30 of which saw no deaths. Several incidents were the direct result of terrorism or military action, poor weather and runway conditions, as well as pilot error and poor maintenance. Comparatively, the Boeing 737 has been involved in 159 hull-loss accidents, though over 7,000 737s have been produced.

A string of recent high profile accidents accelerated the withdrawal of the Tu-154 from passenger service. Most notably, on April 10, 2010, a Polish Air Force Tu-154 carrying many high level government officials, including the President of Poland, crashed near the city of Smolensk, Russia, killing all 96 on board. That accident was blamed not on the aircraft, but on pilot error. These accidents prompted the Russian Federal Bureau of Aviation in March 2011 to recommend the withdrawal remaining Tu-154s from passenger service.

As of early 2012, 104 Tu-154s remained in service with various airlines throughout the world, as well as several military operators. The Russian aerospace industry has yet to produce a strong competitor for Boeing and Airbus. The Sukhoi Superjet 100 is Russia’s latest attempt at competing, but only 223 have been ordered thus far, and competition from countries such as China and Japan is heating up.

The Tu-154 will forever has a place in aviation history as a tank of an aircraft, going where other aircraft wouldn’t even dream of. Although it had its fair share of black eyes along the way, this Soviet designed aircraft stood the test of time.

The Tu-154 really did not benefit from Soviet era maintenance, training and conflicts. Take a look at the full list of incidents, and you will see that a ton are not at all related to the aircraft itself.

And all the 737 hull losses were because of the airframe? Of course not.

Sure, few incidents are caused from inherent design flaws in the aircraft. However, on balance, I would be more comfortable flying in a 737 than a Tu-154 (not that I would be uncomfortable flying any aircraft in a first world country). You can have the safest airplane ever designed but with poor maintenance and training, it still wouldn’t amount to much. Safety is about the whole package, and the Tu-154 falls significantly short of the 737 in that regard.

I do not disagree with this at all. Because of longstanding safety issues, which are not all attributable to the aircraft itself, I would not board a Tu-154 now.

That’s our man! I am proud to live in the city where Tu-154s have been built – Samara (formerly Kuibyshev). Unfortunately we don’t even have a single Tu154 in the city preserved as a monument.

I’d really like to know the story behind this last delivery. What’s this TU been up to since production ended? Sounds like great fodder for an aviation mag story. What do you do with a brand-new jet that’s sitting for a decade and a half?

Having flown on the Tu154 with Balkan Bulgarian/BH Holidays on 5 different holidays the 154 was a comfortable, fast aircraft. I miss seeing the aircraft, it made a welcome change. The 154 always looked modern and had charisma, something todays offerings from Airbus/Boeing definitely lack.