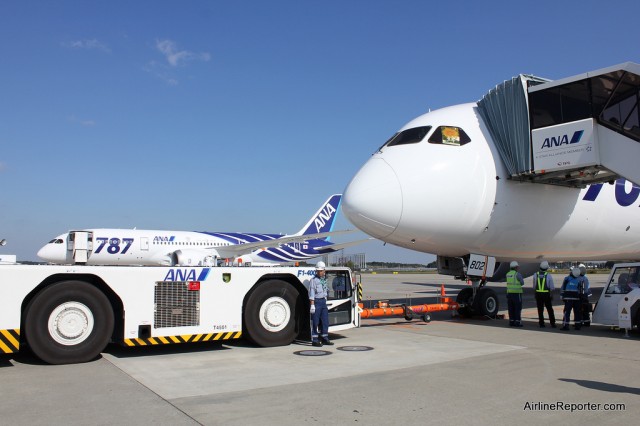 On November 1st, ANA celebrated one year of Boeing 787 Dreamliner operations. It is hard to believe it has already been a year. Boeing issued a press release and I wanted to share the facts and figures that ANA and Boeing have experienced during the aircraft’s first 365 days. I really hate just copying and pasting a press release, but I am a bit short on time, so the rest of this blog is a direct copy and paste:

Boeing As launch customer of the 787, ANA was the first airline in the world to offer passenger flights with the 787. During the past year, ANA 787s have flownÂ around 9,000Â flights, carrying a total ofÂ 1.8 millionÂ passengers.

ANA has achieved excellent results for the 787 over the course of the last year. ANA’s fleet of 787’s has recorded a 10% higher passenger load factor than with other aircraft, recording 82.6% on international routes and 72.8% on domestic routes. A recent passenger in-flight survey revealed that 40.4% of passengers selected their flights specifically to fly on the 787 while some 98% of passengers said they would like to fly again on 787.Â In addition, the 787 benefits from excellent fuel efficiency. At launch, it was anticipated that the 787 would save 20% in fuel for each international flight. ANA is pleased to confirm that the saving amounts to 21% per flight.

ANA currently has a fleet of sixteen 787s, more than any other airline in the world. In September 2012, ANA announced plans to purchase an additional eleven 787-9s, bring the total number of 787s ordered by ANA to a sixty-six.

ANAÂ CEO andÂ President Shinichiro Ito said “ANA is delighted with the performance of the 787’s in its fleet over the course of the last year. The 787 benefits from strong fuel efficiency with high dispatch reliability, and importantly, is well regarded by our passengers. As ANA works towards becoming Asia’s number one airline, we remain committed to the 787 to help support and drive our growth strategy”.

Raymond L. Conner,Â President and CEO, Commercial AirplanesÂ of the Boeing Company said â€œWe have shared ANAâ€™s excitement through the last year as they have shared the overwhelming response of passengers to this amazing airplane. ANA is a shining example of what can be done with the 787 — they are operating it successfully on domestic routes and international routes, while also validating its exceptional fuel performance and seeing true passenger preference.

Operation Data of Boeing 787 during the year

I was amazed at how many 787s were at HND when I was there.