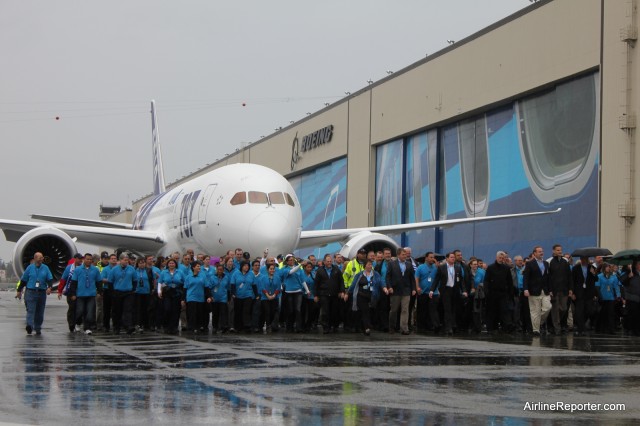 It was cold and it was very wet, but the celebration was still great. The event was set up outside the Boeing Factory at Paine Field. By the stage was ZA002 in standard ANA livery and down the way sat the 24th 787 with special ANA 787 livery (JA802A). Â The first 787 to go to ANA, JA801A, was seen parked next to the Future of Flight for its first flight earlyÂ tomorrowÂ morning. Almost right on time, the 787 in special ANA livery was pulled towards the stage with 500 Boeing employees walking with it. 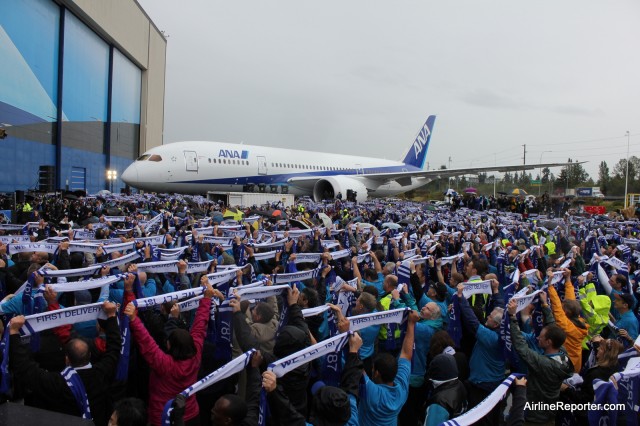 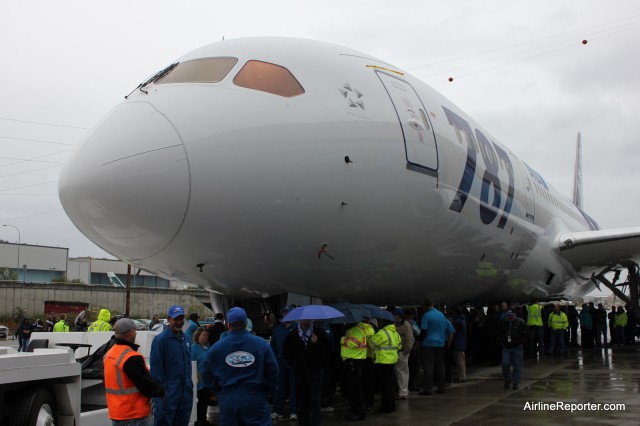 “Today we celebrate a significant moment in the history of flight,” said Jim McNerney, Boeing chairman, president and CEO. “The 787 Dreamliner is the biggest innovation in commercial aviation since the Boeing 707 introduced the world to passenger jet travel more than 50 years ago.Â I want to thank ANA and all the employees of Boeing and our partner companies for the talent, technology and teamwork that have brought this game-changing airplane to life.”

“It’s not often that we have the chance to make history, do something big and bold that will change the world in untold ways and endure long after we are gone,” said Albaugh. “That’s what the 787 Dreamliner is and what ANA and Boeing have done together â€“ build what truly is the first new airplane of the 21st century.”

Be sure to check these too:
* MORE OF MYÂ 787 DELIVERY PHOTOS
* Great roof shot of both aircraft from Boeing
* Gallery from the Seattle PI

This is a great plane, I wonder though, just how big these planes are getting nowadays? I worked for Boeing in Irving, TX 15 years ago when we were building Boeing 757, that thing was huge and I haven’t had a chance to flight on it yet but imagining how huge and technological advanced the Dreamliner is, it’s incredibly awesome.