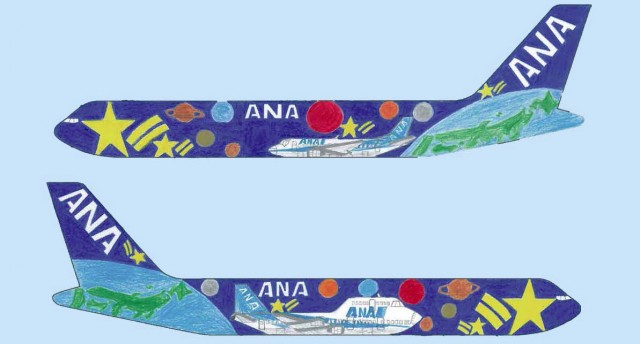 Kind of a cool looking livery, especially done by a child younger than 12. Image from ANA.

A while back, All Nippon Airways (ANA) announced a contest for people to design a special livery to help celebrate their 60th anniversary. Oddly, my entry did not make the final cut.

ANA received over 7000 submissions from 36 countries and has opened voting on their special website.Â You have until October 21st to vote and the winning design will be announced on December 1st.

There are some pretty slick looking entries. If you cannot decide on your favorite, no worry, you can vote for more than one.

The winner will have tickets to Japan to see their livery in-person. Which is your favorite?

The one with the kids.

I chose the children, bottom right (19 and older division).

I wish they’d let everyone rank the other choices. My alternative second choice is the one with the birds, middle left (12 and under division).

I didn’t like the other designs as much as the children or the birds.

I was rather disappointed with all of the designs, especially the 18+ category. I kind of expected something more thematic and have something to do with 60th anniversary. This guy on YouTube had a really good idea using the flight attendant uniforms to tell the history of the airline. I prefer this guy’s, at least his had a theme I could understand. These others all seem like they were normalized to the kids ones.