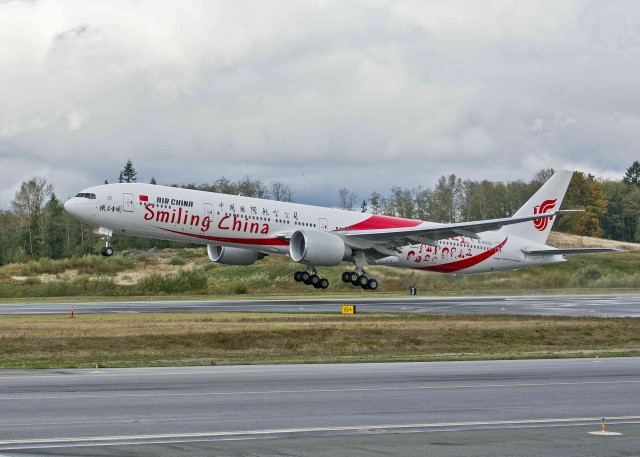 When I was visiting Paine Field recently, I caught a glimpse of a special livery from Air China.Â YesterdayÂ  the Boeing 777-300ER was delivered to the airline and Boeing shared some background information on the unique design.

The aircraft displays 40 different smiling Chinese faces to represent the role that Chinese aviation has played in bringing China to the world.

“We hope this special-livery airplane will bridge the connection to bring a smiling, confident and friendly China to the world,” said Feng Run E, vice president of Air China. “With the airplane flying around the world, we hope more business travelers will experience the super flight comfort offered by Air China’s 777-300ER.” 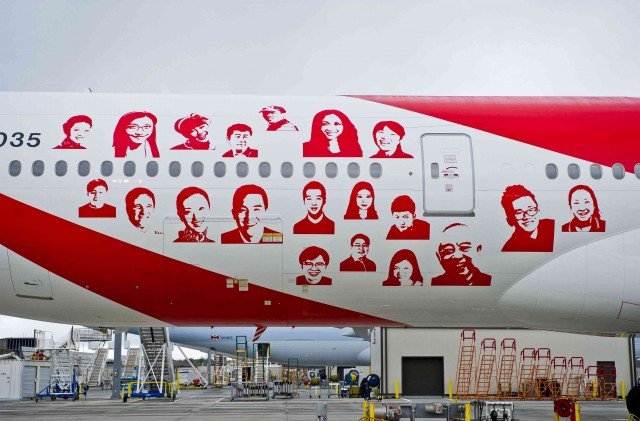 HI-RES IMAGE (click for larger): Air Chinaâ€™s newest 777-300ER features the faces of people who were selected from a social media campaign co-organized by Air China and Boeing in July 2012. Image from Boeing.

The 40 people were chosen via a social media campaign created by Air China and Boeing earlier this year.

“Boeing is celebrating its 40th anniversary in China. Over the past four decades, we have witnessed the rapid development of China’s aviation industry and we’re honored to be part of its success by providing our best products and services,” said Ihssane Mounir, senior vice president of Sales for Greater China, Japan and Korea, Boeing Commercial Airplanes. “We look forward to carrying on this great tradition of growth and development over the next 40 years.”

This plane does make me happy 🙂 Can you imagine having your face on the side of an airplane?? Way trumps the smiling Mormons on the sides of buses.