On Wednesday, All Nippon Airways (ANA) started their inaugural service from Seattle-Tacoma International Airport (SEA) to Tokyo Narita (NRT) using a Boeing 777-300ER. Now, there is nothing wrong with the 777, but it was supposed to be using the 787 Dreamliner.

In the image above, the most interesting statement is the “Will introduce the Boeing 787 Drealiner on Seattle-Narita when it is ready.” The “it” in that statement is not the route — since it is more than ready for a 787. The “it” is talking about the Dreamliner that has not yet been delivered to ANA. For now, the airline is expecting to use the 777 until October 2012.

Earlier this year, the fifth 787 test aircraft, ZA005, made a quick visit to SEA, preparing the airport to start scheduled service for the Dreamliner. 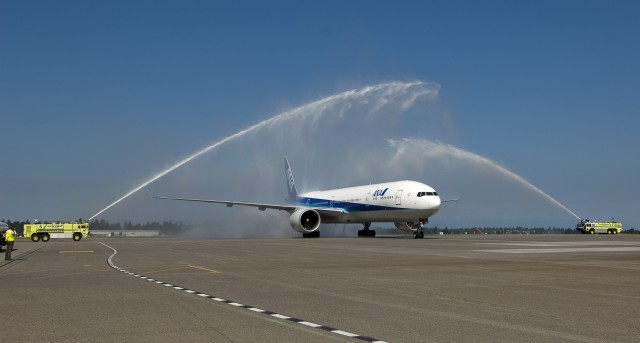 When arriving for the first time, ANA’s Boeing 777-300ER was not only greeted by a water cannon salute by the airport’s fire department, but there was also a celebration in the terminal with a children’s taiko drumming group and a ceremonial sake cask-breaking.

’œANA’s decision to be here reinforces Seattle’s status as a global gateway,’ said Port of Seattle Commissioner Rob Holland. ’œOur mission is to create jobs by advancing trade and commerce, which in turn stimulates economic development. ANA will be another driver for this mission for the entire region.’ 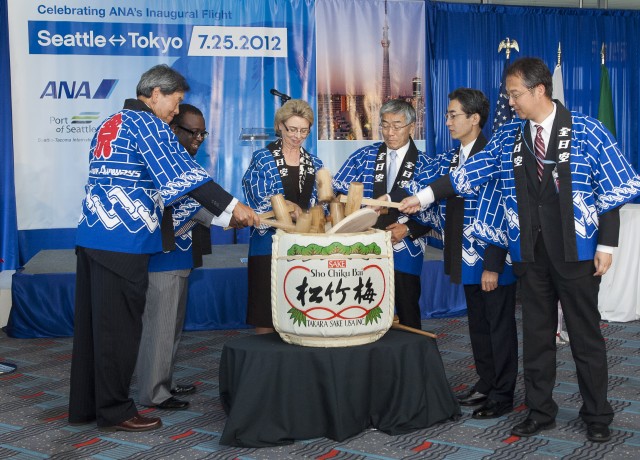 United Airlines, a Star Alliance partner of ANA, currently operates a daily flight from SEA to NRT using a Boeing 777-200 and it will be interesting to see if both airlines can be successful on the route. Previously, United Airlines has stated that they have, ’œNo changes planned,” for their route.

Originally they were planning on launching it during fall, starting with the 787, but in order to get some of the summer demand, they moved up the launch date using the 77W. Since they announced the move forward of the start, they never said it would be with a 787, they maintained that the 787 would start flying the route around the time of the original launch date.

Yup! I should have probably made that more clear. I was more commenting on how ANA has probably planned to operate the 787 on the SEA-NRT route for a few years now.

Boeing’s Randy Tinseth says that they will start using the Dreamliner in October: