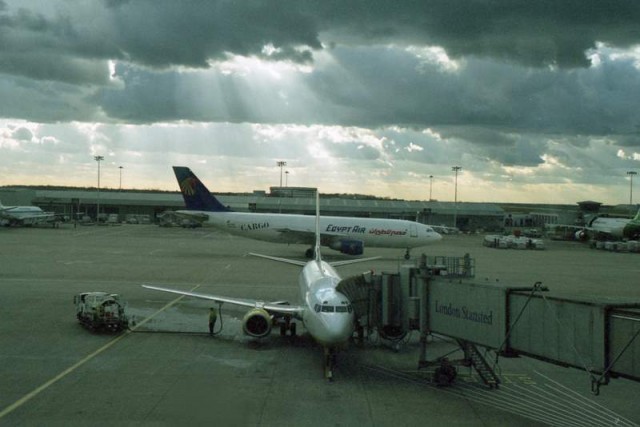 View from inside the terminal at London Stansted International Airport, Feb. 1999. Photo by Hunter Desportes.

Today’s travellers aren’t up to speed when it comes to airport security liquid allowance, with nearly half (44%) admitting they don’t know the 100ml rule, according to London Stansted Airport.

Despite the 100ml law coming into force nearly six years ago, an alarming number of Brits (36%) still don’t know what constitutes a ‘liquid’ under airport regulations. Three in five (60%) believe baked beans are exempt while a staggering (28%) don’t think water counts as a liquid.

Cosmetics are also a source of confusion, with many believing everyday make-up items don’t need to be placed into a plastic bag for security checks, including lipstick (82%), mascara (60%) and foundation (47%).

Two in five (40%) think the airport security rules are confusing but the uncertainty doesn’t stop with just liquid; travellers are trying to take a number of weird and wonderful items through security.

The research highlights that this lack of security know-how means that customers are holding up queues at security to declare items. While more than one in five (27%) admit to having had items confiscated once, 20% have been stopped on more than more occasion.

Of those that had to handover items at security, many tried to talk their way out of it with excuses such as “I forgot they were in my bag” (47%), followed by “I didn’t know what the legal size limit was for liquids (26%)” and “I didn’t realise they were actual liquids” (23%).

John Farrow, Head of Terminal at London Stansted Airport, said: “We’re constantly amazed by some of the bizarre items that people try to take through security – some of which simply can’t be mentioned here! With an increasing number of people opting to travel with only hand luggage, we are urging travellers to make sure they take time to understand the security regulations before leaving home.

“As London’s most punctual airport, we pride ourselves on having processes in place that ensure a fast and efficient journey through the airport. However, no one likes to stand in queues so make sure you are ready for the checks at the time of packing to avoid any unnecessary delays in the airport.”

A reminder of the restrictions on the quantity of liquids:
* Liquids may only be carried in containers holding 100ml or less.
* They must be carried separately in a single bag which is:
* Transparent and re-sealable
*No larger than 20cm x 20cm (8in x 8in)
* Able to close properly with all the items inside
* At security control, place the bag in the tray separate from
your other items
* Liquids in containers over 100ml will not be permitted through
security – please pack them in your hold baggage instead

https://www.airlinereporter.com
The End Of An Era: The Transition From The Prowler To The Growler
Music Video to Commemorate a Lost Bag
4 Comments

As to the crustaceans, were they afraid someone would have a trained attack lobster?

Well assuming that the person in question wasn’t in fact smuggling the crustaceans I think most airlines have pretty strict rules about the transport of live animals, especially inside the cabin. Carrying them in your hand-luggage sounds like something that would typically not be allowed. To bring down a plane a trained attack mouse would be better, just set it free in the cabin and let it start chewing through wires.

Actually in airports like Boston, you can buy live lobsters packed for shipping as carryons. (Or at least you used to be able to)

A snow-globe is a “bizarre item”, really?
Also, why is it “alarming” that 36% of Brits don’t know what counts as a liquid under the security rules. I fail to be alarmed by the idea that someone’s water bottle might be confiscated (though I can certainly sympathise with their feeling of annoyance).
Is it really that surprising that people don’t realise lipstick needs to go in the plastic bag, since its neither a liquid nor a gel? Also, how can 82% of people get that question wrong, but only 36% not know what the definition of a liquid is under the rules? (Not to mention the fact that if 82% of the people don’t know your rules you’re not communicating them very effectively).
“I forgot it was in my bag” sounds like a pretty valid excuse to me. Is it really that hard to believe that people might use their carry-on bags for purposes other than flying around and so might have forgotten about putting in a pair of scissors or a screwdriver say?
If this piece is indicative of London Stansted’s attitude towards their customers remind me to always make sure I’m using one of London’s other airports.