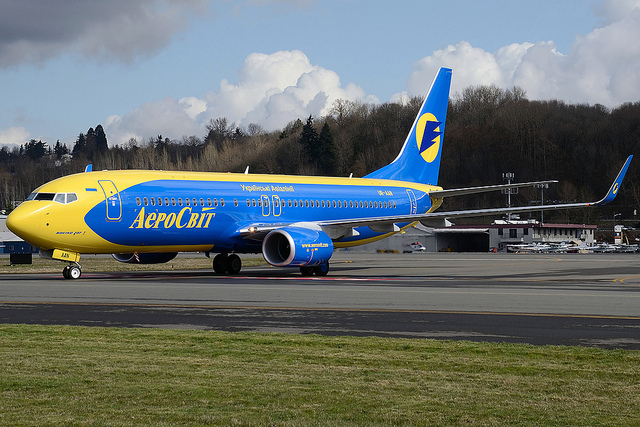 While recently driving down I-5, passing Boeing Field, I couldn’t help but notice a Boeing 737 with a bright yellow nose and I wondered what airline it belonged to. It did not take long to find that it belongs to the Ukrainian based airline Aerosvit.

My own experience goes to show how much this livery pops out. Driving by Boeing Field (south of Seattle), one is often treated to Boeing 787s, 747s, 737s and a lot of other aviation eye candy. It takes a special livery to really demand attention — and I have a feeling that was the intent.

I am always a fan of an airline that is not afraid to go with a bold livery and I think Aerosvit did a great job with this one, especially considering their old livery was a bit bland.

Aerosvit Airlines has been in operation since 1994 and currently serves over 70 destinations. It is part of the Ukrainian Aviation Group, which also includes Dniproavia and Donbassaero (which both have similar, yet very different liveries — click on the airline’s name to see).

Dniproavia is the best of the bunch …

I think that it’s quite a nice livery, if you want to look at ridiculous liveries, have a look at kulula.com, a subsidiary airline of Comair in South Africa.

I don’t know what you’re talking about. Kulula’s livery is amazing! ^_~

I like the livery. Stands out like the Southwest planes here in the US. there’s no mistaking the livery when you see it flying in the air!