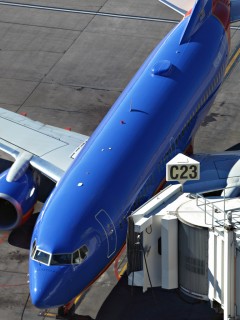 Earlier Nick and I had been talking about VOIP (Voice Over Internet Protocol) and I was explaining how you cannot have a phone conversation while flying — he was all too happy to prove me wrong. This is by no means a “how-to” story and I am not going to explain  how he did it, since I am against people talking via their phone on planes. However, I can say it was nothing complicated and anyone with a smart phone could and an internet connection could replicate it.

Virgin America’s Abby Lunardini explained that they block VOIP and have not had any major issues with passengers finding their way around it. Alaska Airlines also bans VOIP for passengers on their GoGo internet. Even though they haven’t had a lot of issues, the flight crew are trained to enforce the airline’s policy. “Should a customer get around the VOIP blocking, our flight attendants would be prepared to enforce our policy which prohibits voice calls of any kind inflight,” Alaska Airline’s Bobbie Egan explained to AirlineReporter.com.

Row44, another airline internet provider, that can be found on Southwest Airlines and Norwegian Air Shuttle helps airlines in similar ways. They provide airlines software that allows them to choose what sites they want to block. “We allow our airline partners to decide whether to use this option and which sites to block,” Row 44’s chief commercial officer, Howard Lefkowitz explained over email. Row44’s airline customers are easily able to add new sites that are deemed to be a problem since new technologies are always emerging. “The back-end system supporting Row 44’s broadband entertainment platform adapts quickly and can immediately add new sites (VoIP services or other types of websites) to the list of blocked content in-flight. But this will be a decision for our airline partners.”

So does this become a game to beat the internet providers and the airlines? No, at least it shouldn’t. Public opinion in the US is pretty split on allowing in-flight conversations. The Federal Communications Commission (FCC) bans cell phone usage in the US and it is still against airline policy. Nick was a good passenger and kept our conversation short, even though he supports passengers being allowed to talk on their cell phones on a plane.

https://www.airlinereporter.com
Photo of Boeing 747SP with 787 Dreamliners Looking On
Take a Moment and Let Airlines Know They Are Loved
9 Comments

I’m not sure that I can truly justify the position, but I too believe that pax shoul not be voice chatting while in flight. It is just more noise and more than a little irritating to other pax. In other words, for the duration of your flight, Shut Up! Just one old fart’s opinion. Of course, the techno-geeks will always be able to find a way around the restrictions. Nuff said. -C.

Seems to me that chatting while in flight isn’t a huge issue. Passengers all around me chat constantly; a baby cried for two hours behind my seat yesterday morning. Last week a young boy used my seat for a foot rest, bouncing me all of the way from JFK to SEA. I listened to horrific howl of Rolls-Royce Trent XWB engines and a quarrel between two young lovers until almost midnight last night on my way to BDL.

Aircraft cabins simply aren’t sanctuaries of relaxation,; why do we think pandemonium will break out if people can talk on the phone? Phone calls are allowed on countless flights if one uses a credit card and the in-flight call system; how does this differ from VoIP???

Electronic communication is ubiquitous in today’s world. We can talk on the phone while driving, walking, on the bus, and now in the air. Let’s accept it and move onto pressuring politeness and manners instead of limiting liberty.

I have mixed opinions about calling on planes. On the one hand, introducing another noise source in a plane isn’t exactly my idea of fun. That said, who am I to prevent the guy in front of me from conducting an important business conversation while I’m chatting with whoever’s to the right/left of me (depending on whether I’m in seat A or F lol)? Personally, I think the availability of e-mail, IM and SMS (via Google Voice or other means) obviates the need to yak on the phone while in the air, but that’s just my opinion, as a college kid who texts more on the ground than he talks anyway.

In any case, if airlines allow VPN use over their networks (a big deal for business users) they can’t prevent VoIP from a technical standpoint. Nor can they prevent going to…uh…crude sites over in-air WiFi. The best they can do is catch the somewhat tech-savvy users in the act and politely order them to stop the shenanigans.

I may not be in the majority here, but I think that talking on the phone inflight is a horrible idea. I surprise myself by saying that, because I’m such an early adopter in every way. At 15, I was in line on the first day for the iPhone 4, and so on. Clearly I don’t mind progress …

But for me, an airplane is still sort of like a sanctuary. After my recent JFK-MAD flight, I realized how quiet an airplane can really be. No Wi-Fi, no inflight phone use, people sleeping or talking quietly to themselves, and just the quiet sound of us whooshing across Atlantic sky.

Yes, I know it may be cliche, but imagine that loud person screeching into their cell phone at the gate talking about their personal business so everyone can hear, then imagine being stuck in a metal tube for the next five hours with that same person … with any luck, they’ll be seated right next to you.

The thought of that kind of makes me shudder a bit … inflight calling is definitely not for me.

Disallowing in-flight voice is a fruitless endeavor. People will always find ways to circumvent the rules/tech hurdles. Airlines would be wise to enact policies outlining when it is and is not appropriate to use VoIP in flight.

I do not think that just because people can get around it, that airlines should allow it. I do not want in-air phone service, but I am willing to support it, if that is what people want. I am sure sooner or later an airline might allow it and we will have to see how it is judged.

Until then, we should fight (I think it is more professionally called “debate”) sometime on this 🙂

Aug 4th 2012- for the first time a SW attendant got pissy when he saw me talking over FaceTime on a flight using Southwest’s in flight wifi connection. Completely unaware of what VoIP is, he did not get the concept that my iPad does not have a wireless cellphone connection and as such is not a PED. I gave him the FAA rule reference.
Taking on a wired hands free mic I make less noise than 2 people talking to eah other.

Most airlines have a policy against chatting with people online while flying. #1 it causes a disturbance and #2 it hogs the bandwidth (makes everyone’s internet connection slow.