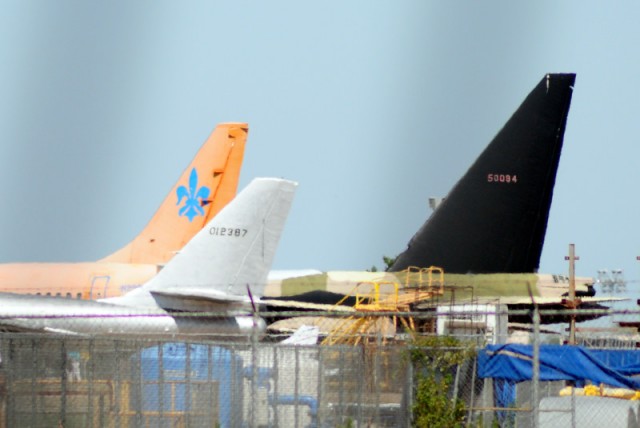 “What we did see was a KC-135 running touch-and-goÂ maneuversÂ and these three unidentified planes. Â As best I can tell they are on the Spirit tarmac although it is possible they may be on Boeing or even McConnell AFB property. To be honest I’m not sure where one ends and the other begins. In any case these were on the east side of Oliver street. Â Google and other searches yield no results for any of the planes listed. Â We were particularly interested in the tan 737 because of its unique livery. It appears that it has an N-number that begins with a 2 followed by what might be 9. Â The pictures were taken on August 6 just before 4 PM local time as indicated by the exif.” 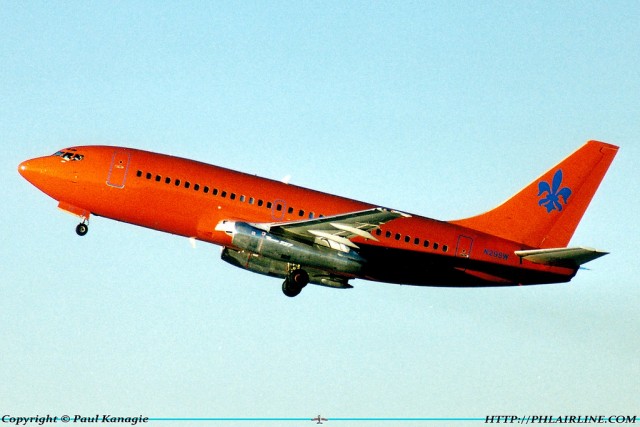 UPDATE: Although many folks have helped track down this plane, I have to give uber kudos to @t0eknee who got the answer in a matter of minutes.Â  This plane is N29SW, a Boeing 737-200 that was first with Southwest Airlines, then sold to Ryan International Airlines. At one time the aircraft actually had a very bright orange livery, but today it is a bit more faded. The 737-200 now belongs to the Kansas Aviation Museum, where 80% of the original plane was built.

UPDATE2: Got an email from Jim Armstrong giving a bit more information on the other two planes: “The shiny one toward the left is a Boeing B-47E model, one of a very few left in existence. Â The tall dark tail aircraft toward the right is a Boeing B-52, probably a “D” model. Â Having grown up in Wichita from 1950 to 1962, I’m pretty familiar with both aircraft.”

I believe this is it. It’s Ryan International Airlines.

Here is a similar photo from Airliners

Sincere thanks for your help!

The vertical stab, with numbers is a B-47.

It is a Ryan International Airlines livery

That 737 is located next to McConnell Air Force Base at the Kansas Aviation Museum. It was given to them by Ryan International Airlines.