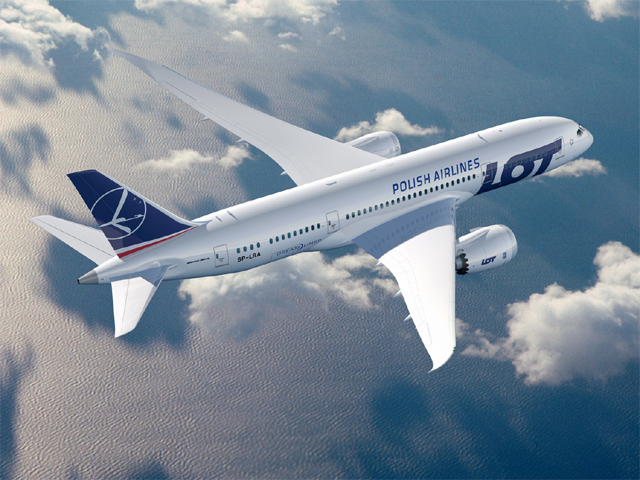 LOT Polish Airlines currently has eight Boeing 787 Dreamliners on order and during the Paris Air Show they unveiled an updated livery that will debut on the Dreamliner. The large “LOT” lettering and bird will remain, but with many other updated airline liveries, the cheat line running down the windows will disappear. The aircraft will be configured with 18 business class, 21 premium economy class and 213 economy class seats. LOT is set to be the first European airline to receive the 787 Dreamliner, starting in summer of 2012.

Typically I mourn the disappearing cheatline, but I think LOT has done a great job with this new livery. For some reason, I especially like the titles on the engines.

I like the new livery. It seems to follow the minimalist theme a la Air France and Lufthansa. I think it’s nice for them to lose the cheatline. It would have been nice to keep something across the cockpit windows, but I suppose it would look out of place without the cheatline.

The red streak they implemented on the tail is interesting. The LOT on the engine cowlings is a bit of overkill. I think the bird would have been a better choice.

As a polish citizen I really took it into consideration chainig myself to the runway or go on hunger strike, schould any of the ugly new schemes presented on the internet have been choosen as the new livery ,)

I like the look of airplanes without that cheat line. To me, it makes them look cleaner and more advanced.

From the pictures published so far, is it true that the full name “Polish Airlines” is now on both sides of the craft, instead of the Polish language on the right side and English on the left?