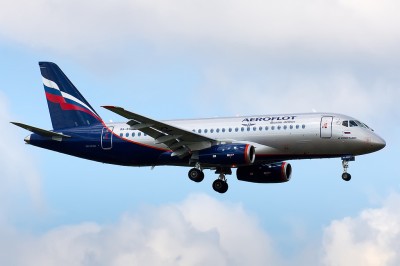 The Superjet 100 is a 75-95 seat regional airliner made by the Russian manufacturer Sukhoi. It is intended to replace older TU-134s and Yakovlev Yak-42s. A collection of Russian companies have come together to develope and produce the new aircraft. It is being reported that Sukhoi is looking at the possibility of creating a larger version that could hold 100-130 passengers and at creating a corporate version of the Superjet.

’œI soon realized why the crew was so concerned about taking photographs on board. The brand new airplane was falling apart. Despite the fact that it’s been less than a month that the airplane has been carrying out regular flights, the interior was in a deplorable state. The hatches either couldn’t fit or didn’t hold the oxygen masks [it was supposed to hold].

https://www.airlinereporter.com
Hitching a Ride With Lufthansa on Their Frankfurt to Miami Inaugural Airbus A380 Flight
Aviation in Seattle: American Heroes Air Show Seattle, National Wings of Freedom Tour and More This Weekend
3 Comments

If this relatively new jet’s interior is already “falling apart,” that can’t be reassuring for passengers’ perception of areas that they can’t see.

“If it ain’t Boeing, I ain’t going.” …..and this article points out a good reason why.