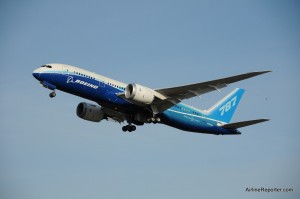 When the Boeing 787 was first discussed, Boeing named it the 7E7. Randy Tinseth, Vice President , Marketing for Boeing Commercial Planes, describes the naming process on his Randy’s Journal Blog.

Boeing decided to hold a contest to see what the name would be. The finalists were: Dreamliner, Global Cruiser, Stratoclimber, and the eLiner.

https://www.airlinereporter.com
Inside the Flagship Detroit American Airlines DC-3
Video: Cookie Monster and the New United Livery – Which one does not belong?
5 Comments

If the Boeing 787 aircraft series doesn’t get certified soon, it will instead be called the ‘Nightmare-Liner’, regardless of its beautiful exterior, and throughout aviation industry.

Frankly the first drawings were the best the damn thing has ever looked, since then it has morphed in looking just like any other aircraft. Dreamliner…with the emphasis on dream is about right. 787 is far more realistic though.