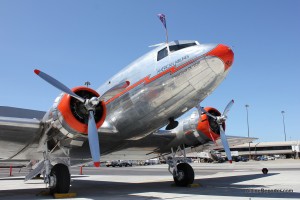 Very nice photo and post about my favorite airplane. I flew about 600 hours in DC-3s and really enjoyed the airplane. I miss the sound of those great radial engines and the challenge of making the aircraft “sing”.

Even though I have a type rating in the DC-3 there’s not much call for DC-3 captains these days.

Well, you can fly passengers on DC-3s on Buffalo Airways still 🙂

Re: DC-3 Captain at Buffalo – Only if you’re Canadian and only if you want to work on the ramp in the cold for a year. Only good if unmarried and <30 years old.

dear Tony, Tomorrow am (2-4-12) we are scheduled on your breakfast flight departing Stuart (FL) I’ve got the
excitement of my 1st flight of my life. I know it’ll be wonderful. We (my husb. Emilio) met you at PBI tarmac
Jet Aviation in January. Hope weather cooperates. See you tomorrow.