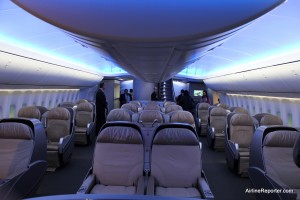 The business class section of the Boeing 747-8 International mock-up has amazing lighting.

The plane seen at the 747-8I unveiling had no interior and Lufthansa’s first plane isn’t quite ready yet for a viewing. However, Boeing does have a full, two story interior mock up at the Customer Experience Center located in Renton, WA and I was lucky enough to be invited to check it out.

My first impression was, “wow.” I understand that the seating choices and a lot of the fanciness won’t be chosen by every airline, but just the lighting is a huge improvement. The full color spectrum LED lighting in the ceiling and along the walls makes the cabin feel bigger and the new overhead bins (also found on the 787 Dreamliner) actually make the cabin bigger.

Boeing was able to show what “standard” lighting seen today looks like versus the new lighting and it makes a huge difference. Boeing suggests that an airline makes the ceiling lighting the same color as the sky (blues to oranges), but airlines can customize almost any color. The sky colors brings your eyes up and gives a feeling of a higher ceiling and a much more enjoyable environment. 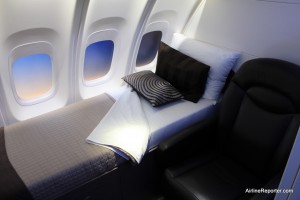 This mini-suite on the upper deck looks pretty comfy.

Unlike the mood lighting seen on airlines like Virgin American (which is also awesome), the lighting in the new interior doesn’t cause the whole cabin to change colors. Airlines have the ability to create different lighting in the ceiling and side walls, but still keep the main lighting on the passengers white.

The stairs going up to the upper deck is much more welcoming on the 747-8I than the stairs I have seen on Boeing 747-400s.Showing what could be, the upper deck of the mock up had lounge and private suite seating. Who needs a seat that turns into a bed, when you can have a seat and a bed with a sitting area right outside?

Although the mock-up doesn’t have engines attached to it, I would imagine the real 747-8I will be much quieter inside. Seeing the 747-8F take off, it is obviously much more silent than the Boeing 747-400 and older models.

Boeing will have a consistent feel across all their airlines. Now, the Boeing 737, 777, 787 and 747-8I will have similar custom lighting and more modern interiors. These new interiors will keep passengers happy and help to make airlines more profit. Sounds like a winning combination to me.

More stuff on the Boeing 747-8I’s interior:
* Check out the rest of the interior photos
* Boeing’s website showing the interior
* Video of the 747-8I interior from Flight Blogger
* Interior and exterior photos from NYCAviation

Wow!!! I love that mini suite