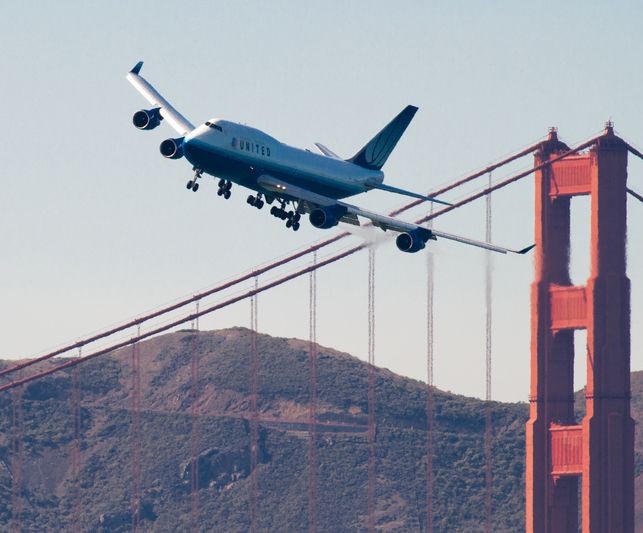 Until tomorrow, folks in the San Fransisco area are able to enjoy Fleet Week 2010. From their website: “The mission of San Francisco Fleet Week Association (SFFWA) is to honor the dedication to duty and sacrifices of the men and women of the U.S. Armed Forces and to conduct and offer disaster preparedness training.”

To help celebrate, United Airlines flew one of their Boeing 747-400’s by the Golden Gate bridge. Pretty frek’n sweet, if you ask me. Over at The News Blog for Bay Area Travellers, they explained they have heard negative feedback about the fly over.  Some say it is too similar to 9/11 and others are asking why a private airline is at a military celebration. Oh please.

First off, this is nothing like 9/11, it is a celebration with a bunch of different aircraft (including military) flying over the bay. If seeing a bunch of FA-18’s can fly by the bridge, why can’t a Boeing 747? Secondly, yes, United is not part of the military, but that doesn’t mean they can’t help to celebrate what the military does for our country.

Absolutely stunning pics, thanks a lot!

I disagree with the complaints. People have to stop worrying about what reminds them of 9/11. As a nation the United States has moved forward since that horrible day. Activities such as this exemplify what it means to keep on living not being afraid.

Also, United has leased many of its aircraft for troop transport over the past few years so their participation is relevant.

United Airlines belongs to the Military CRAF (Civil Reserve Air Fleet), hence they fly many missions on behalf of our Air Force, Navy, Army and Marines. United had every right to celebrate along with our great United States Armed Forces!

Awesome, and admirable flying by the guy behind the yoke there (at least I think it’s a yoke and not a stick on a 747). Agreeing with you a hundred percent, Paul.

So now all that remains is to see someone who’s skilled enough to send a plane-any plane-under the Golden Gate during an airshow. Hey, if the Red Bull Air Race boys can do it in Hungary, why should the Europeans get all the fun?

Raptor jockeys, I’m looking at you.

Frying chickens in the barnyard!

That photo is BS – it was photoshopped.

Nope, very real. Lots of video and other photos to show it happened! Kind of crazy.

It does not take much to send an aircraft that close to a bridge to shift and hit it, they were very close. A good change in wind, or even the seagull that was flying underneath getting into the engine is enough to bring down that plane on the bridge, that would be pretty messy. I think there are other ways to celebrate more safely. We shall pray for all drivers everywhere to be safe, St. Christopher and St. Fiacre pray with us and for us all.

R Churches, really? Don’t know much about flying. Seagull into a 747 engine will being the plane down?! See those FOUR engines on the aircraft? The 747 could fly with only two, and even limp along, albeit not far, on one. Also, if a wind gust comes along strong enough to PUSH the 747 into the bridge, you’d have other issues to worry about. Pilots are well trained and experienced in flying in various weather conditions, from jet stream winds in the hundreds of MPH’s to wind shear like you describe. Please move on, there was NOTHING unsafe about the flyover. Let’s stop flying in general, since every flight over every major city may be brought down by an errant bird or gust of wind.

What is eye candy about the near miss of the Golden Gate that ONLY recalls horrific images of 9/11? OMG! How utterly moronic. I will go out of my way to avoid flying United.

It was very much planned and in the schedule. On top of the 747 flying by the bridge, other military aircraft did as well.

David, It’s even WORSE that it was planned. 9/11 or not, it’s just moronic to think flying thisclose to an iconic structure with human lives at its mercy is the way to “celebrate”. I’m shocked to read others find it so fun. Wow. It could have been a disaster very easily. I don’t know how anyone gets clearance for this.

Hate to break it to you, but the plane didn’t even fly over the bridge, it turned between the camera and the bridge. More dangerous approaches than this are done hundreds, if not thousands, of times per day at airports around the world.

Wow Maureen,
What a cry baby! Give it up already…9/11 was 10 years ago and we as a people are supposed to be strong and have pride in ourselves and our resolve. It’s people like you that give the terrorists exactly what they want, people who are scared and afraid. We are AMERICANS! We are proud of our freedom and love to have fun, hence we enjoy airshows! This is a great demonstration of our technology and our skilled pilots that fly them…the common people like myself appreciate being able to see these things because we are rarely allowed to do so – be proud of our military and the people that make it work – join in the celebration of the United States, don’t be a poop and just try to bring everybody’s enjoyment down!!

Secondly, the plane was not that close to the bridge, it appears like it was from certain angles but it really wasn’t. It was supposed to make dazzling images which it clearly did. For those people who think the plane ‘nearly hit’ the building, are you the same people that drive 55mph in the fast lane marked 55mph?

Thirdly: Chances are for a week(s) in San Fran. they have been talking about this airshow saying that people on the bridge may see planes flying and it’s for the airshow that is going on.
Can anybody confirm this?

We will never forget 9/11, but we must move on and not give the terrorists what they want.

Not cute. My son was on the bridge at the time. He saw the plane coming and it clearly appeared it was going to hit the brige. He was appropriately terrified and drove frantically to get off the bridge before it hit. What if he crashed? I love aerial acrobatics but this was completely inappropriate. If it actually was part of the airshow, the FAA person who approved the flight needs to be fired.

Your son drove FRANTICALLY to get off the bridge to avoid a 747 floating at near stall speed yet he wouldnt have given a second thought to the F/A-18s screaming at 500+ knots directly at the bridge over and over again?

Mr Glenn…how presumptuous of you to assume this about her son! I probably would have drove frantically to get off the bridge too! That is very scary if you do not know what is going on. I can certainly understand why he was so freaked out. I love airplanes…my husband is taking flying lessons now…but I have to agree that this was handled so poorly as far as letting the public know.

Considering the 747 was at no time over the bridge, I find it unlikely it appeared as though it was going to hit the bridge. I drive down to DEN a lot, when rwy 7 is in use, the planes on approach fly right over E470, close enough to identify the plane by the door on the landing gear, that is a ton closer than even the most sensationalist video/photo shows with this plane being close to the bridge.

Not surprised to see so many thick-headed individuals whining about a fly-by during FLEET WEEK. Afterall, this is San Fran. For years now, the aging hippy population here has been trying to get FLEET WEEK cancelled altogether because, get this, it has military overtones. Again, this is SF, the city who declined to give the decomissioned battleship USS IOWA a home because it was a tool of war. ooooh, scary! Sometimes, I think that the rest of the country should avoid SF because it is a reminder of pea-brained moonbats who are afraid of their own shadows. Occasionally, as I’m driving over that bridge I see a large cargo vessel passing underneath. Should I be terrified that a rogue wave may push that ship into the bridge? Should all that ship traffic be banned? Don’t get me wrong, I actually like California. It’s the people I have a problem with.

the photo is photoshopped. looking at the video http://www.youtube.com/watch?v=TSGT44hU4uc&feature=player_embedded#! on you tube, the plane is never seen passing infront of the cables at that point, it actually passes higher and closer to the main support. ‘journalists’ will do anything to get your attention.

The pic is amazing. The pilot isn’t suicidal.