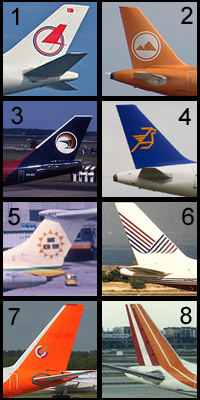 A while back I did an Ultimate Livery Challenge and thought no one would get them. HA! Eight people ended up knowing the answers and I gave out eight prizes (Future of Flight hats). Well, I realized I had to make it harder…and I think I have. Here is the challenge:

GUESS WHAT AIRLINE EACH LIVERY BELONGS TO AND THE AIRCRAFT TYPE IN THE PHOTO.

Small print: I have not photoshopped any of these photos except to blur out reg numbers or flip the image to make it look pretty. You don’t need to know the exact model, just the family. (ie just need “Boeing 747” not “Boeing 747-300”). All these liveries are either new/old and used on planes doing passenger  operations (ie not just cargo). All photo credits will be given with the answers.

Not too sure about all of them? That is ok. I do not expect anyone to get these all right. A prize (and link to your website…if you have one) will be given out to the closest person…so don’t hesitate to guess.

I also had a request to allow more time that wasn’t a weekday. I have listened. You have until TUESDAY JUNE 22nd at 5pm PST (update: I was sick yesterday evening and not able to get the answers written, so extended it) to submit your guess. Use the comments if you have questions (or want to complain about the difficulty), but do not put your answers there since I don’t others stealing your knowledge (or hard work). Please email them to me to da***@ai*************.com, send them via Twitter or my Facebook.

GOOD LUCK (you will need it)

Do you have to know the aircraft and the livery combined, or either one?

Oh you have to know both for each one 😉 david

Just the basic model. So A320 or Boeing 767. No way to tell with just the tails on most aircraft, so that would just be mean 🙂

David — all these liveries are the mainstream ones, right? i.e. no special liveries, anniversary, etc. They are the standard livery for the airline, correct?

Yup! They are all their main livery, no special ones.

I am very jealous of you.

Im jealous too. I have one left.

Down to one here as well….

I am curious to know which ones are the most difficult for you folks….

That’s the peecfrt insight in a thread like this.

The most difficult one was number 6. I spent 90% of the time on that one.

Finished up yesterday afternoon. #7 proved toughest for me, as the sites I searched on only had a logo, rather than a full tail.

#8 to me looks like a certain airline, but I don’t think that it belongs to them, because there are some differences.

I spent the most time on #5 but then again I did my searching while also working so it probably was not terribly efficient!