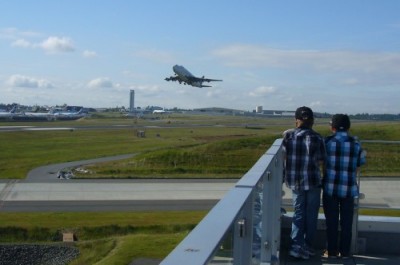 A while back I wrote a blog talking about how Boeing is making a real effort to connect more with the general public. In that post I talked about how eight year old Harry Winsor submitted a drawing of a new Boeing plane. Unfortunately, Boeing sent a canned letter saying they accept no outside ideas and will be shredding his photo.

This didn’t sit well for Harry or his father, John. Bloggers and some other media picked up on the story and Boeing sprung into action admitting this is not how the new Boeing wants to do things.

To celebrate the spirit of flight, The Future of Flight, located in Everett, WA set up a drawing event where people can submit their crazy airplane designs (mine was an awesome cube-plane).

For Father’s Day, John, Harry, his mother and brother made their way to Seattle from Colorado to see the art he had inspired and get a tour from the Future of Flight and Boeing.

Since I was out of town, I was not able to join in the festivities. However Aubrey Cohen with the Seattle PI and Harriet Baskas were there to cover his adventures.

Even though Harry and his family got VIP treatment and a special tour of the Boeing facility, the pinnacle was meeting Boeing aircraft design engineer, Cam Carnegie. Carnegie had written to Harry after he got his form letter and now really wanted to help him dream. “I just kind of wanted to show him that progression from dreamer to being an engineer,” Carnegie told Aubry with the Seattle PI.

Todd Blecher, Media Communications Director for Boeing, flew out from Chicago to meet the Windsors (I hope he got to fly on a Boeing). He spoke about the fumble and said that for legal reasons Boeing has to send out the form letter to people submitting ideas, but says they have a new and special letter for kids.

“If it’s a letter from an adult pitching an idea, we know exactly what to do. When it’s a child, there’s a difference,” he said. “They uncovered a flaw in our process that needed to be fixed.”

Blecher told Harriet Baskas that they are still working on the letter. The first version was too dry and formal and the second sounded too much like a recruitment letter. Blecher said his boss took the third version home to his five kids for some real-world feedback.

As Blecher told me previously, Boeing’s transition won’t happen over night, but they are making a real effort. There is still talk about a Facebook page and even a Tweetup for Boeing fans in the Seattle area. I hope to see those outreach efforts and others soon!

* Photos from the Seattle PI
* A write up from Harriet Baskas

https://www.airlinereporter.com
My First Experience with Body Scanners Gets Me in Trouble with the TSA
ANSWERS: Ultimate Airline Livery Challenge 2
2 Comments