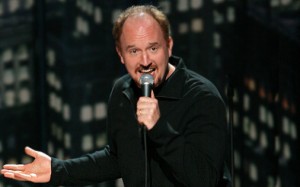 I am with you and with Louis CK all the way. There is no way to satisfied people, years ago people complaint’s were they hated airplane food, now that most airlines are not offering or charging for it, the complaints are that airlines don’t serve food anymore or is too expensive. Why are you complainig if you didn’t like it in the first place???
I love flying so much that my best experiences when I go on vacation is the time I spent at the airport and on the planes. I’m 30 years old and last year my mother came to visit me and then we flew together back home, it was the first time my mother and I actually travel together on an airplane, since as a child a traveled alone or with a group of peers on vacation or college trips. I have been on more planes that I can recount and she couldn’t believe my face of excitment when that plane took off. She look at me and said “My God you are acting like a child on your first flight”, I look at her and told her “we are freaking flying!!!!”. People take for granted what it took to created those wonderful machines we call airplanes and how amazing is what they do.

I know the feeling. When I fly I am normally taking photos (mostly to do a blog) and am really excited. I have been asked if this was my first time flying a few times because of how I am acting.

Coming back via airline from my Labor Day weekend trip (a week and a half ago), the lady in the next seat said she was kind of afraid of flying, and cited turbulence off the bat. I told her there was nothing to worry about – and all of you probably know how this explanation goes… It’s like driving a car on a bumpy road, where you know you can’t have a smooth ride. You can see the bumps on a road. Since you can’t see bumps in the air, it seems more mysterious. But it isn’t. A bumpy ride in bumpy air is no surprise. And if you saw what the manufacturers do to design and test these planes for it, you wouldn’t worry about even moderate turbulence. Her eyes lit up and said that explanation really helped her.

With that as an example, it isn’t hard to point out that fear of flying is usually just a fear of the unknown. Once you learn to catch yourself worrying about something, you can also learn to ask about what’s really going on.

A little later into the flight after the weather front was behind us, I got out my digital camera and started taking pictures of scattered clouds below, lit by the setting sun. She noticed that I was having fun looking for the right views and taking pictures. And she saw on the camera’s LCD screen that some of the pictures were turning out very well. (This was the best of them: http://ian.kluft.com/pics/tn-ky-201009/07/img_3573.jpg ) It reinforced another point I had already said… find a way to enjoy flying that works for you. For me, ever since I was a kid, it’s been all about the view out the window. But anyone who puts away that fear of the unknown will find any pastime they enjoy to work well.

I agree, it is a matter of perception. I actually heard from a few people that my “By the Numbers” post actually helped folks out.

Just be ware of Louis KC… in 2007 he had this conversation:
http://youtu.be/8fk5bk3MZrk Louis CK terror flight story on Opie and Anthony(2007)