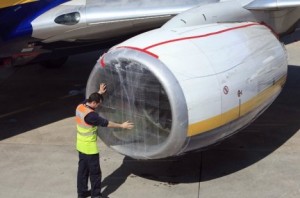 A Ryanair Boeing 737 protecting one of its engines from ash.

What a crazy last few days with the volcanic ash huh? Unless you ONLY get your news from AirlineReporter.com (not advised btw), you probably know about this volcano in Iceland that erupted and causing complete havoc for flights to and from Europe.

I don’t want to re-hash all that is out there already on this, but share a few interesting things I have run into:

* Great graphic showing the spread of the ash.

* CrankyFlier looks at why it is not a good idea for airlines to fly into the ash.

* Aviation Week’s Things with Wings blog has a satellite photo of the ash.

Having all these flights be cancelled is a HUGE issue. Even once the flights are back airborne again, it is going to be days for the airlines to play catch up. Not only are there so many passengers that need to get where they are going, but flight crews and aircraft are not where they need to be.

To me, this is a good reminder on how important air travel is to our entire world. How difficult it was to get to/from Europe (from the US) before air transportation.

I’ve been following the plight of a friend who was ticketed to fly home from Heathrow to Boston on Wednesday. His hotel at Heathrow extended his stay with no issue, but of course getting home was going to be another matter, and on Monday, he was due to take his young sons on a surprise spring break trip to DisneyWorld. Once Irish airspace cleared, he thought he could get a ferry over and catch Aer Lingus back to JFK, where his wife would pick him up. However, that didn’t pan out. Next his colleagues hopped Eurostar while he pondered that the cloud may clear up. It didn’t so Saturday he rented a car and got himself to the outskirts of Paris, where he spent the night. The next day he drove to Madrid, where he’d been rebooked on LAN to Santiago and then onward (upwards?) to Miami, where he planned to meet his wife and kids for their spring break trip.

He’s lucky that he works for a company that said they would pick up the cost of changes to get him back to have a vacation with his family…and then of course, he’ll be productive at the office, as opposed to sitting in a room at Heathrow taking pictures of idle aircraft. I’m hoping for the best of him, but I did remind him that he is earning 7,500 additional elite qualifying miles. 🙂

Now sitting at and airport taking photos of airplanes is not always a bad thing, but it is if you have places to go :).

I wouldn’t imagine all the difficulty that everyone is having to go through. Lots of extra money out of pocket, missed work, etc.

Thanks for sharing another perspective on this!