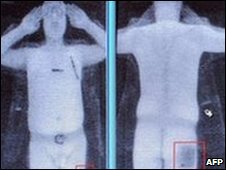 Kathleen Petrowsky, the Transportation Security Administrationâ€™s (TSA) Director at Chicago Oâ€™Hare Airport, first stated it would be mandatory for all passengers to be scanned with the body scanners. However, after making that statement, Frishling received a reply from the TSA’s blog team stating, “Imaging technology is optional. No plans to make it mandatoryâ€¦ Anything else you read is incorrect.” Frischling confirmed this with the TSA’s Public Affairs unit that the scanners would be optional. Passengers who do not want to be scanned would be able to have a pat down instead.

https://www.airlinereporter.com
FUN WITH PHOTOS: The Boeing 727 is the World’s Best-Selling Airbus
Heading to Atlanta!
5 Comments

I absolutely agree. That is exactly how I understand it. Cheers!

Goverment employees are better not make fun of my peepsicle, or i might go ballistic and eat everybody’s brains alive!

“We are told that pat downs are not affective enough at stopping terrorists; so we need the body scanners, yet they are not required? What would stop someone who wanted to do harm to request a pat down? Not to get too graphic but there are a lot of places someone could hide something they donâ€™t want found. At about $150,000.”
You can read more about it?