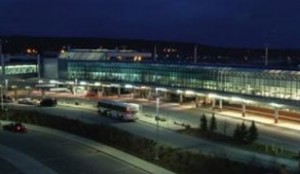 Manchester Airport: A great place to live for a year!

Meet Anthropologist Dr Damian O’Doherty. He wants to live in an airport for a year. This isn’t some publicity stunt nor is he in love with the Tom Hank’s movie The Terminal.  Dr. O’Doherty is doing this in the name of science!

He will be spending up to 18hrs per day, for 12 months living in the airport, observing how fliers use the airport. The government-funded research will take place at Manchester Airport. The goal is to make airports a better place for people to spend their time when they are forced to be in one.

Dr. O’Doherty said, “Some people live in airports and 30,000 feet in the air. They commute from place to place, have business meetings in an airport hotel and then fly off somewhere else. I call them the ‘kinetic elite’ – always on the go.”

He has been researching airports for five years and feels living in one for a year is the best way to really see how airport life works. Even though he spends all day and part of the night at the airport, he still makes it home to his family every night.

https://www.airlinereporter.com
My Interior Tour of the Boeing 787 Dreamliner
Aviation in Seattle: Taking a Scenic Flight on a Seaplane with Kenmore Air
3 Comments