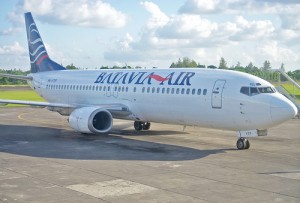 In the perspective of the passengers I could see the alarm. But its also the role of the flight crew to ensure the safety of passengers. Sometimes this is done by reassuring that there is no emergency even if one is perceived. Older aircraft can smoke when the engine starts. Heck I have watched some older Airbus Cargo planes land and have compressor surges. Which sounds like a slight boom and sometimes even creates a momentary burst of fire. The first time I saw one I was ready to role out the fire crews but held off as I was told that particular aircraft had them all the time.

Can’t believe they jumped off the plane though!

That’s true, gas turbine engines frequently flame-out or have combustion burps that let out all sorts of smoke and flame. One reason rationale for under-the-wing engines (in addition to ease of maintenance) is that it generally keeps passengers from seeing these common occurrences. I’m very surprised the flight crew wasn’t more forceful – perhaps it’s simply a sign of growing indignation or familiarity with air travel. People used to dress up to fly, and flight attendants had to be registered nurses. Now I’m afraid they’re treated like flying buses.

Geez, I’d like to see the folks who were motivated to jump from a ’37 without so much as smoke in the cabin… that’s crazy!

I love this post! Youhave a great blog here!