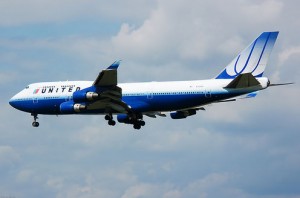 Thank goodness! United’s appearance has annoyed me for a while now. Flying on some of their planes is like time traveling back to the late 80’s. It seems United has had issues with deciding if they want to update their fleet or not.

Not too long ago they re-painted their fleet in a stormy clouds (my name) livery, which people didn’t like and didn’t last too long. I kind of liked it, even though it was dark, but they decided on a lighter livery (see photo). But they haven’t fully changed over their entire fleet (which I am ok with, b/c the new livery seems dated). It has been the slowest livery change I have ever seen.

The livery is not the only thing they have been slacking on. Anyone who has flown United Airlines in the last 10 years will see a familiar site: the same seats. They call the design “Tequila Sunrise”  and I call it ’œdated and ugly’.

Good news! United plans to replace all the dated seats with new blue leather seats and they plan to re-paint all their aircraft. And not too soon! Brett Snyder with CrankyFlier.com recently flew on the last United Boeing 737 and it was obvious they were avoiding replacing those seats and I wouldn’t doubt other plans have the same ’œquick fix’.

This also comes at a time where United Airlines is looking to purchase 150+ planes very shortly. Hopefully this is a sign that United is not going to be a dinosaur and fight for its survival. I wish them the best of luck!