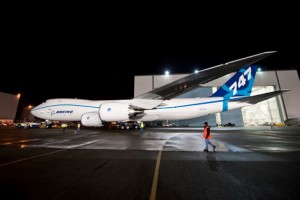 Last week, Boeing showed off its “light” livery on the new Boeing 747-8 Freighter. This new Boeing livery saves time and cost, since it is less complex than their standard livery.

It has a simple white background, with stripe and “8” on the tail. I got a glimpse of the new livery myself while driving by Paine Field (don’t worry my passenger took that picture)Â  and it looks even better in person than it does in pictures.

Check out the photo gallery of additional photos and video of the B747-8 Freighter (I love that wing).

https://www.airlinereporter.com
United Airlines is Planning a Makeover!
VIDEO: The Sun Will Never Set on Northwest Airlines