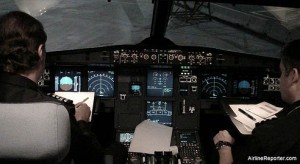 Maybe they can install cameras in all the planes to keep an eye on us passengers too.

Don’t they already record the cock-pit? Isn’t that what the Black Box is for?

Maybe they are talking about union activities while flying planes?

I say “nay” to the bill. I feel that it is unprofessional and uncalled for. What is the difference between this and government wire tapping? Oh and isn’t this the Senator who is against small government? Senator Flippy the Flip Flopper!

The difference between this and gov’t wiretapping is that they’re on company time.

I think the company should have the option to record the cockpit if they suspect a problem (and have it cleared through the union). Really, who cares what the pilots talk about? As long as they take off, don’t hit anything, and land safely, WTF do I care? For that matter what does the company care?

My question is, why is this even a congressional issue? I think that this be worked out between the unions and the company. And shouldn’t Sen. DeMint be working on something more worthwhile, like health care, the economy, the wars…?

This is America, the land of giving up freedoms for personal security. All joking aside these Pilots are employees of the airlines. Their conversations are already being recorded and they do not have any reason to have a level of privacy while on the job. Thousands of jobs video and tape record their workers to review performance and punish workers for violating policies, how are pilots at their work stations any different? Why should recordings of their work product not be allowed to be used or reviewed?

Maybe, but there is a lot of down time being a pilot where they can have private conversations. What if they want to talk about a new company policy? Or vent about a supervisor. What is someone with the airline doesn’t personally like the actions of a pilot and listens to all their cockpit recordings to find a reason to fire them?

RE: This is America, the land of giving up freedoms for personal security

No, it’s not–at least compared to the rest of the world. We can go where we want, when we want. We can own guns and take them most places. Our police are required to have warrants. Our constitution exists to protect personal freedoms. The only situation I can think of where my personal freedoms are limited in the United States in the name of security is at the airport–where I have to take off my clothes and allow my belongings to be searched to travel.

How republican of him to push for more government interference.

Unless it might hinder the profits of American Businesses(tm), is “immoral”, or may harm campaign contributions

Unless you’re also being sarcastic, I think you’re confused about my sarcasm.

I think that was part of the concern and reason why to implement the availability of the recordings. What these pilots are doing during their “down time” should be flight related they still have the lives of hundreds of people and millions of dollars worth of aircraft to continually monitor.

I don’t agree. Flying a plane is an unusual job. You’re in charge of taking off, landing, and standing by and taking action in case something goes wrong and the plane needs to be flown manually. Passing this bill would be the equivalent of passing a bill allowing doctors” supervisors to listen to the conversations they have while they’re on call. I don”t think the gains of this bill come close to outweighing the losses.

Kate I can see your point. But what conversations do they need to be so private in the cockpit that can’t be heard by people randomly checking for saftey reasons. The pilots will know they are being recorded, so it is not like they are unknowingly saying things that can be heard at a later date.

Oh also what are the losses ?

1)Privacy (1984 Ben! 1984!!!)
2) Reporting system will no longer be anonymous and people peredict that means pilots will be less likey to make reports directly affecting safety

I guess my reasoning is that a pilot and a copilot who spend incredible amounts of time together should be allowed to have personal conversations to which not everyone has access. There is already a system in place for accessing conversations if there is a problem and a successful anonymous reporting system. Also, 1984 BEN! BIG BROTHER! AHHHHHH!

The Everett public school system failed me I never had to read that book. Maybe I will stop by the store and pick it up tonight.

Also I read that they can listen to the conversation not take away the anonymity of the reporter. If you are concerned about saftey, once an annomous report is made with the new bill, the report can be confirmed and corrective action taken. Not just a check mark made on some report about a potential problem that was annomously reported.

We’re confusing the issue – the bill would allow >Airlines< to access black box recordings which are controlled by a unique body of law promulgated by the FAA, a Federal Administration, under act of Congress under the Interstate Commerce Clause (but would not let the government per se!)

It is perfectly legal today for airlines to record and monitor cockpit and cabin conversations federally. Some states have issues with recording conversations without consent (Washington) but no states ban video recording or real-time, non-recorded audio monitoring. Furthermore, recording conversations on interstate flights is likely an activity where the Commerce Clause would allow FAA regulations to preempt state laws. Airlines can do this now – it's legal!!!! (and, the government can't – wouldn't be able to even if this bill Did pass…)

This bill makes no sense because airlines have accessibility to their aircraft (they own them), and may install listening devices today. They will not violate any constitutional rights to privacy because 1) they are not the government, and 2) no employees, professional or not, have a reasonable expectation of privacy from their employers while at work.

The bill may actually harm, however, because allowing airlines to tamper and extract from Black Boxes endangers the integrity of data accessible after an accident. The Black Box's integrity is paramount in determining the cause of aircraft accidents.

RE: 2) no employees, professional or not, have a reasonable expectation of privacy from their employers while at work.

This is what I was getting at. As you outlined it would however be a smarter idea to install a secondary recording device so as not to tamper with the very important Black Box

To clarify:
1) This bill would give airlines access to the black box which now can only be accessed by FAA
2) Airlines already have the right to install audio or video recording devices in their planes

This bill is a knee jerk reaction to an unfortunate event. The reason it garnered so much attention in the media is because it was a highly unusual event. That’s what makes it news.

If this bill passes it will do little to increase professionalism in the cockpit because as an active international pilot, I can tell you that we are very focused on the task at hand. You can rest assured that the level of professionalism is already at high levels. Having someone monitor our conversations for hours on end will not help. It will simply give the listener an earful into our marriages and relationships…things we talk about after the jet has been safely put on autopilot for the long flight over the Atlantic.

Years ago, after an incident, the airlines began testing us for drugs and alcohol. Guess what they found? Very few pilots tested positive.

Years ago, after an incident, the airlines began requiring us to have increased security checks. Guess what they found? No pilots were carrying weapons on board.

This will just be a waste of time for whoever will be monitoring thousands of flights.

I realize that recent events do nothing to help people who fear flying and those who focus on it may actually increase their fear. Those who never had a fear of flying may even develop one.

As someone who is called upon by t.v. and radio media to comment on these types of unusual incidents, I tell it like it is.

Sure, pilots should have cameras in the cockpit as long as we have cameras and recorders in Senator’s a Representative’s offices when lobbyist go visit them.