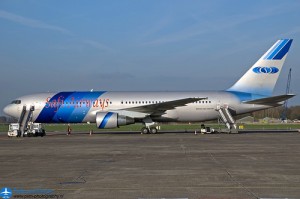 This livery is unique, but it seems confused. I like the nice silver base and the blue strips on front. However, the red/orange font doesn’t go too well and the tail seems confused with having strips, gradient, and the logo.

One of their Boeing 767’s is the official plane for the president of Afghanistan.

THANK YOU YVETTE FOR THE TIP!