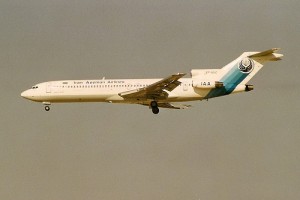 When I am trying to sleep, I can find the “look out this window to see _______ mountain,” a little annoying. However being asked to pray by a pilot while in mid-flight would wake me up QUICK.

An Aseman Airlines Boeing 727-200 took off from Tehran, Iran, after a six-hour delay. About 45 minutes into the flight, there was a “technical glitch” and the plane had to turn around to go back to Tehran. The pilot informed the passengers of the issue and asked them to pray.

The plane landed and all passengers were safe. Details at this time are scarce and the airline is slacking a bit in the PR department.

Iran has been in the spotlight recently with the crash of a Caspian Airlines Tupolev 154 in July that killed all 168 aboard.

I believe a plane is a perfect spot for prayer, being closer to god and all.