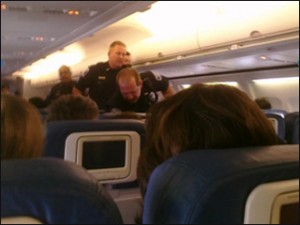 Photo taken by a passenger on Delta flight 1050

Delta Air Lines flight 1050, a Boeing 757, from Seattle to Atlanta had to be diverted yesterday due to a passenger who got a bit out of hand. Witnesses report that a passenger, Paul Marchak III was sitting in a middle seat and started to have a heated conversation with a woman sitting in the window seat. When she was trying to get up to move, he was not allowing her and not listening to the orders from the flight attendant. Three men who “looked like linebackers” came to her rescue and helped to subdue Marchak in the back of the plane with zip ties. The pilot decided to divert the plane to Nashville, where police were more than happy to arrest him.

Family of Marchak say he has Tourette’s Syndrome and had been in Alaska for a two weeks visiting his stepmother. His stepmother stated he had been acting unusual and violent during his trip with her.

Although the incident was scary for those on board, the woman in the window seat praised the flight crew and the gentlemen who helped her, “(They) handled it perfectly,” she said. “I don’t know how they maintained their calm and peacefulness. I don’t think it could have gone any better considering what could have happened.”

The flight landed about 1.5hrs late with no other issues.

https://www.airlinereporter.com
All Nippon Airways Wants Passengers to Use the Bathroom Before Boarding
Passenger Gets Banned After Attack on Kiosk
1 Comment

sounds like the airlines have a case on hand here – they should file charges as this kind of activity is not cheap!