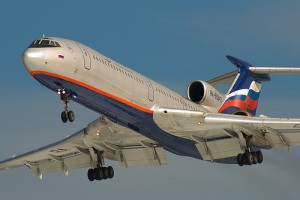 Aeroflot, Russia’s largest carrier, is planning to rid its fleet of Tupolev TU-154 jets andÂ acquiring additionalÂ Boeing and Airbus aircraft.Â It isÂ planning to sellÂ its remaining Tupolev jets, but the airline will still have six Russian builtÂ Illyushin Il-96’s to handle some international flights.

This is a big change from an airline that at one time had no Boeing or Airbus aircraft. Aeroflot is hoping to cater more to business travelers and TU-154’s are not known for their quality or silence.

Aeroflot also is looking to lower the cost of its routes. The airline’s chief executive, Vitaly Savelyev, explained the airline is currently losing money on 40% of its routes and looking to avoid thousands of layoffs over the next few years. Instead they are hoping the improved savings with fuel consumption, less maintenance costs, and increase traffic due to flying newer aircraft will allow the airline to avoid layoffs.

With the current global economy and the fact there are hundreds of other older Boeing and Airbus aircraft sitting in the desert, it will most likely be difficult for Aeroflot to find buyers forÂ its 26 TU-154s. Personally it is a bit sad to not be able to see a TU-154 in Aeroflot livery, however it would be worth it to someday see a Boeing 747 or Airbus A380 in the airlineâ€™s livery.

The damned Aeroflot had killed near all of their Tu-154. For that, you will come to hell!