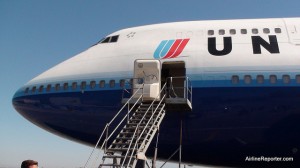 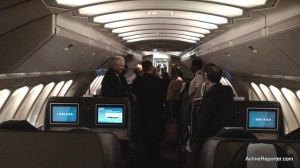 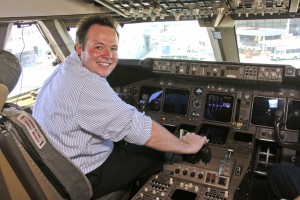 While I was hanging out with United Airlines at Los Angeles International Airport (LAX) a while back, I was invited to go on top of the old FAA tower to get one of the best views of the airport. Words can’t really describe it, nor can photos, so I took a video.

United uses the top part of the tower to guide their aircraft from the gate to the taxi way and back.

Be sure to check the Qantas Airbus A380 parked off to the side.

While I was at Los Angeles International Airport (LAX) a while back, hanging out with United Airlines peeps, we decided to take a walk down on the airport’s ramp. I was excited to just be down with the planes and having the ability to touch a Boeing 747-400 that just came in from Sydney. However, I got the opportunity to do something much more exciting. We stopped at a Boeing 757-200 about to push back and I was told, “hop on to this tug and take a ride.” Seriously? Um…yes please.

Most people see the push back as the beginning of their journey. Even though airliners are able to go backwards using their engines, doing so would cause damage to the terminal and provides less control. Remember, pilots can’t see what is behind them and moving around multi-million dollar machines on your own would be risky. The tug driver and other workers on the ground make sure there are not obstructions in the way of the plane.

As we were pushing back this Boeing 757, the pilots started both of their engines. What a treat. I have never been that close to engines during start up…what a glorious sound.

At most airports, the control tower will authorize when an aircraft is able to be pushed back and give them permission to taxi to a runway. At LAX, United Airlines control their own airplanes and have their own controllers housed at the old FAA tower. Their job is to authorize push back and direct them to the proper taxi way before the main control tower will take over.

That push back experience was probably one of the amazing airline-related experiences I have had. Those lucky tug drivers get to do that every day! I was so excited about this experience, I didn’t even ask where the plane was going. So challenge on!

It was aircraft N596UA leaving LAX on August 24th. Not sure about time, but it had to be somewhere around 10 to 11am. Can you figure out where the plane was heading?

UPDATE: @yyz_monkey and @bmvaughn found that N596UA (I made it more challenging by displaying the wrong reg number) was heading over to Chicago (ORD). Nice work!

PHOTOS OF THE BOEING 757 PUSH BACK 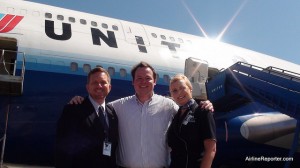 Hanging out with two awesome United Airlines flight attendants on the tarmac at LAX. That's a sweet Boeing 747-400 behind us.

I am an airline advocate. There are lots of media sources and people that love to bash the airlines. If an airline does something major enough to deserve a good bashing, then I will give it to them, but mostly I try to find the positive even in a negative situation.

When I recently connected with Rahsaan Johnson with United Communications while in Chicago earlier in the month, I was dead honest with him. I told him that I feel as though many are under the impression that United Airlines is lacking spirit. Being one who always wants to find the silver-lining with airlines, I wanted him to help let me show people that there is spirit within United.

It wasnâ€™t long before Johnson thought of an idea to help me see, first hand, the energy and spirit most United employees have. I was invited for a day trip down from Seattle to Los Angelas (LAX) to see United connect with some of their best customers, experience some unique things and witness the delivery of Emmys. 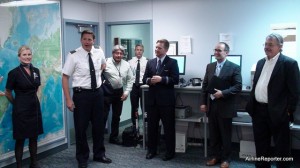 United Airlines pilots talking to customers about what they do before flight.

The morning I left, I posted about the font change of the new Continental and United merger. Throughout the day I was getting some critical comments from you, my readers, about United’s perceived service and I was reading each one to Johnson to give him an idea of your impressions. You all echoed what we have both seen and heard from other sources.

After interacting and connecting with so many United employees and customers through out the day (on and more importantly off record), I honestly feel United is heading in the right direction.Â A lot of people I spoke with will openly admit they know that United has had their ups and downs, but everyone I spoke with feels positive with the direction United is heading and pumped about the likely merger with Continental. 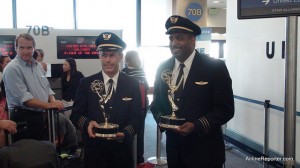 Things have changed a lot for United Airlines in the past forty years. From deregulation, to a few spikes in oil prices, to strong competition from low cost carriers and of course bankruptcy in 2002, United has persevered through it all.

There are a lot of hard working employees who are there to treat their customers well. During my visit to LAX, United invited important customers and showed them how they operate. This was to share what they are looking to do in the future and get feedback from customers on how they can improve their performance. They were able to get helpful feedback on schedules, and service, even down to having the proper ratio of cheese to crackers. 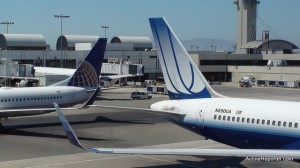 Not only was United able to share what they are up to with special customers, they were also able to share the Emmys with everyone. Later in the afternoon, the Emmys were flown from Chicago to LAX on United Airlines. They had nice comfy seats up front and were welcomed by a crowd of people in the terminal. Being the huge airline nerd I am, when I was told the Emmys were being flown in, the first thing I asked is, “What kind of plane they will be flying in?” (It was an Airbus A320). Hey I am an airline reporter, notÂ TVÂ awards reporter! Yet it is always cool to see not only customers, but employees get really excited about an event like this. It does show there is some great spirit alive and ready to grow at United!

The people that I spoke with are very excited about the merger with Continental. Changes like this inject a feeling of motivation (for those not losing their jobs that happen in any merger) about the future. Continental and United both have interesting histories and will most likely make a solid future together.

Over the next few weeks I will share some of the very cool things I got to experience on my full day at LAX… a tour of the upper deck and cockpit of a Boeing 747-400, riding on a tug while pushing back a Boeing 757 and having an amazing view of LAX from the old FAA tower. Stay tuned!