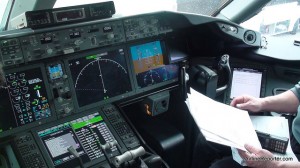 Cockpit of a Boeing 787 Dreamliner. Uh oh, is that electronic device authorized?

“Sit down, shut up and turn off your electronic devices!” Okay, it is not really that bad, but sometimes I get pretty annoyed when I have to turn off my personal electronic device (PED) during taxi. I am a spoiled American and if we are delayed on the tarmac for take off, not having access to my precious electronic devices is difficult. So why the heck are you required to turn your devices off anyhow? And can they really bring down a plane?

If something happens to the plane and you are on above 10,000 feet, you have time. Time to try to navigate to an airport, time to put your toys away before landing. When you are below 10,000 feet things need to happen quickly and it is more dangerous.

One of the important reasons you have your devices off, is to make sure you are paying attention. First you need to pay attention to the flight attendants giving their safety announcement (they don’t do it for fun). Secondly, you should be paying attention to your surroundings. If the plane catches on fire while taxiing out, you need to be ready to react, not listening to the newest Justin Bieber song (is he still “cool” — I dunno). You also need to be able to get out of the plane as soon as possible. If there are cords and cables in the way and your neighbor is distracted, that can slow things down, causing people injury or possibly death.

Next are those pesky electronic signals. All electronic devices give off some sort of signal that could interfere with the cockpit. Even the Federal Aviation Administration isn’t too sure how much these signals affect the avionics in an airliner, but are playing it safe. The FAA’s website states site, ’œthere are still unknowns about the radio signals that portable electronic devices and cell phones give off.’

Airplane manufacturers, airlines and the FAA work together to make sure that any electronic equipment that might go into an airplane will not cause it harm. According to Flight Global, recently on board Wi-Fi tests resulted in some Honeywell avionics to react adversely. This goes to show that yes, electronic equipment can affect instruments, but it also shows that rigorous testing by all those involved make sure that these sort of things won’t happen past the testing phase. Currently all those involved are working together to find the cause and a solution.

Yes, it might be annoying to put your devices away, but I think there are some very valid reasons for doing so. Next time you are on a flight and you hear the call to turn off your devices, be a good sport and do as you are told.

For more information and quotes from Boeing, Virgin America and the FAA, check out my story on AOL Travel News. 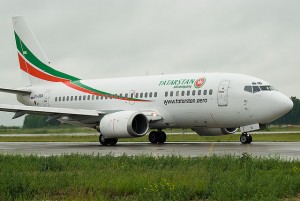 The Department of Transportation (DOT) is working with some funny math and concluding that the tarmac delay rule is working. Both Aubrey Cohen with the Seattle PI and Brett Snyder with CrankyFlier.com take a closer look at their math and don’t come to the same conclusions.

Instead of re-inventing the wheel, please  read:
* DOT’s report, ’œLong Tarmac Delays in July Down Dramatically from Last Year’ that claims delays are down and cancellations have just a, “slight increase.”

* Snyder’s post, “DOT Continues to Claim Tarmac Delay Victory Despite 20 Percent Rise in Cancellations,” which shows how he doesn’t think a 20% increase in canceled flights is considered “slight.”