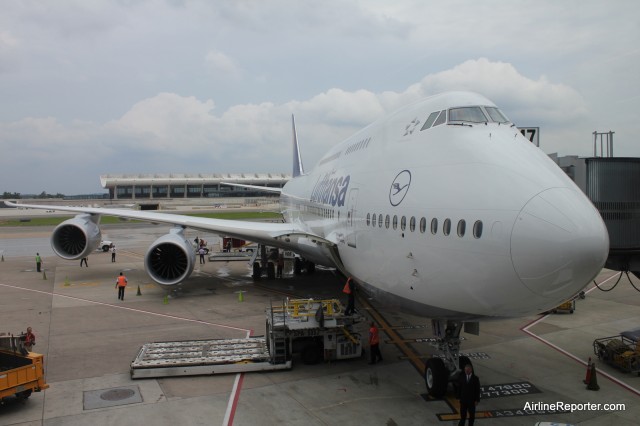 Lufthansa's first Boeing 747-8 Intercontinental is one beautiful aircraft. Here she is seen after her first flight in DC.

It has been a long road from the conception of the Boeing 747-8 Intercontinental to the first passenger flight on June 1, 2012. Being based in Seattle, I have had the privilege of watching Lufthansa Airlines first 747-8I go from a few parts to a revenue-making machine. I felt beyond lucky when I was invited by Lufthansa to take part on their inaugural flight from Frankfurt Airport (FRA) to Washington Dulles International Airport (IAD).

It was a whirlwind trip; leaving Seattle on a non-stop flight to Frankfurt, arriving at 8am local time and about 24 hours later, leaving on the 747-8I (I will write a future story on my 24 hours in Frankfurt). Fifty-eight hours and 12,000 miles after I left, I was back home in Seattle — well worth the adventure. 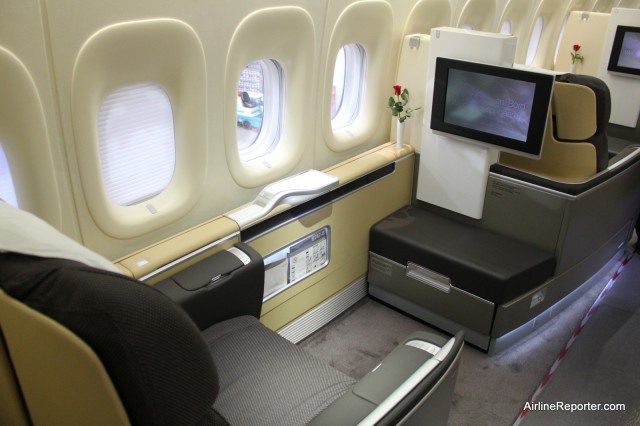 A look at Lufthansa's First Class on board the Boeing 747-8I.

There has been plenty of prep work by Lufthansa to train their crews on the new aircraft type. Currently, the airline has ten pilots qualified to fly the 747-8I, but soon they will have many more. Pilots trained on the 747-400 only need a three-day training course and a flight on the new plane to be qualified. Since Lufthansa just recently acquired the 747-8I, it hasn’t had many opportunities to allow pilots to fly it, but that will now change.

Unfortunately, I was not able to attend the delivery ceremony, so I was excited to get on board my first Intercontinental. During my 24 hour blitz in Frankfurt, there was a special unveiling event allowing me to preview the new 747 and to get access to First Class. 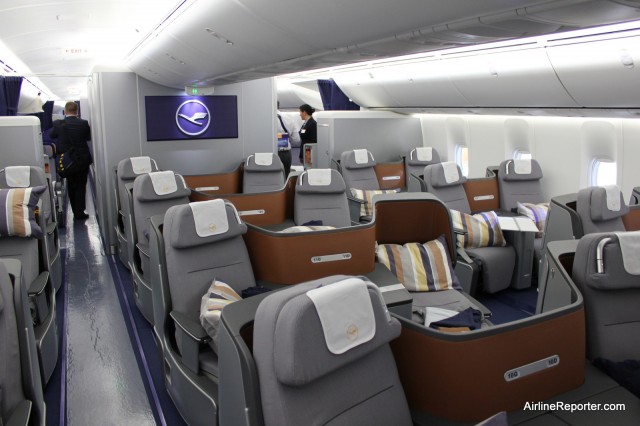 Lufthansa Airline's new Business Class product, which has debuted on the 747-8I.

For the average passenger, he/she might not notice that the 747-8I is something new. From the outside, one might notice the raked wingtips versus the winglets of the 747-400 or the larger upper deck, but it most likely will take the trained eye of an avgeek to see the difference. Inside, there are features, like LED lighting, improved overhead bins, and a feeling of space, that have become familiar on the 787 Dreamliner and 737 with new Boeing Sky Interior.

Not only is the 747-8I a new aircraft for Lufthansa, but it also debuts the airline’s new Business Class. I had seen photos previously, but photos do not do it justice. The new product is much more spacious, cleaner and just plain (or should it be “plane”) better in person. 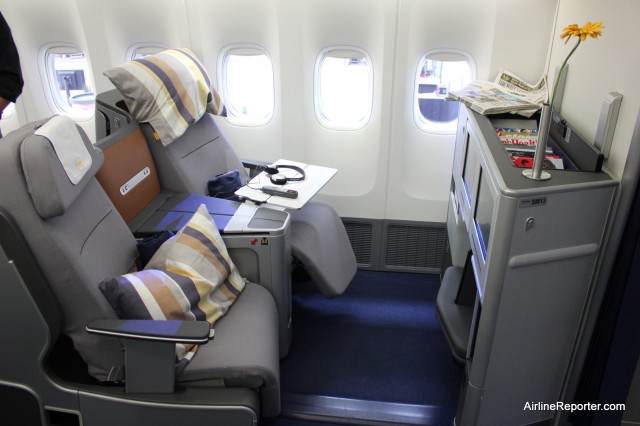 The new Business Class looks classy and has all the bells and whistles that high end fliers have come to expect.

The new business seats are unique to Lufthansa and will not be found on any other airline. They are in a V-shape 2-2-2 layout with each seat having the feet angled towards each other. I wasn’t quite sure how it would work out and worried that I might have ended up playing footsies with my seat-mate. Luckily, that was not a problem.

The pair of seats in the middle of the aircraft  have an advantage over those by the windows — they have more room. With these biz seats, passengers might actually prefer the center seats, although I felt my seat had more than plenty of space.

Lufthansa has its Boeing 747-400 configured with 344 seats and its Airbus A380 with 526 seats — both in a 3-class layout. The new Intercontinental is configured with 362 seats with eight in First Class, located in the nose of the aircraft, 92 Business Class seats, with 32 on the upper deck and the remainder on the main deck, and 262 in Economy class, all found on the main deck.

Lufthansa will continue operating the 747 on more premium routes, since they have a higher percentage of premium seats versus the A380. 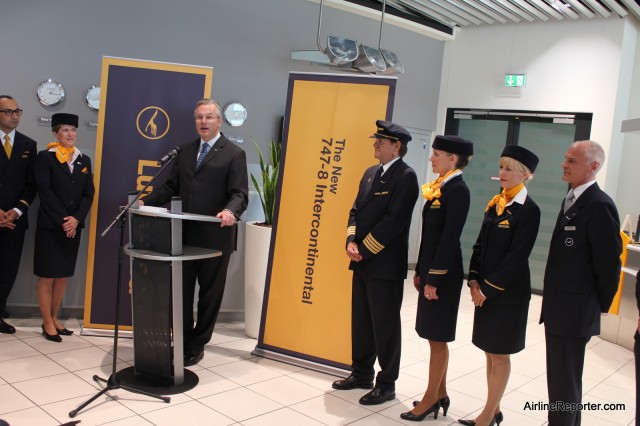 Before departure, there was a ceremony at the gate’s Business/First Class lounge with executives of both Lufthansa and Boeing present. After a glass of champagne and some applause, it was time to board the sparkling 747-8 Intercontinental.

Even though I was on the same plane a day earlier, the energy is entirely different when you are just checking out the interior, versus when you are able ready to take flight. “Epic” and “giddy” would probably be appropriate words to describe it. 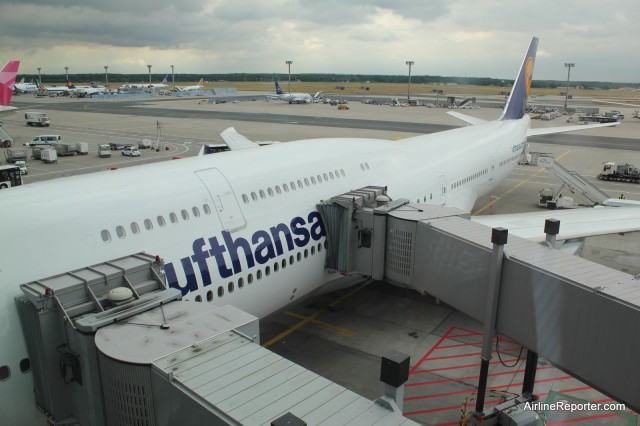 Time to load up. Lufthansa has gate lounges where folks in premium cabins can board directly from the lounge. Keep it classy people!

I had seat 10K — a window seat in Business Class, located on the main deck. I quickly got settled in and was ready to start on an historical journey.

This inaugural flight was unique since there were only 75 invited guests and media and the rest were paying passengers. Most airlines won’t have “normal” passengers on inaugural flights, so it was great seeing all the people (some who had no idea) enjoying the experience. 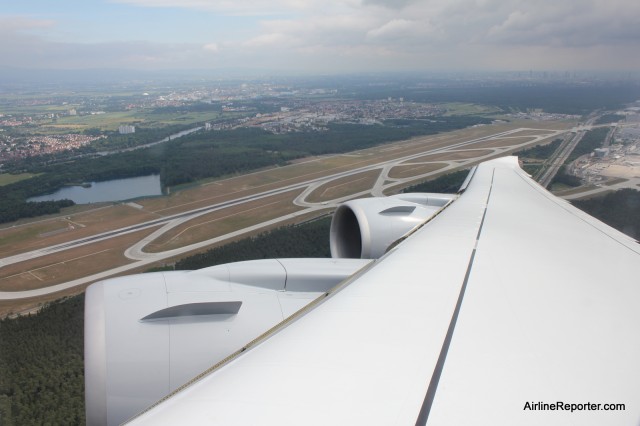 And we have lift off!

How was the flight? Amazing, unforgettable, awesome (insert your positive adjective here). The Intercontinental is not only a beautiful aircraft, but one that flies very well. During take-off, it was music to the ears hearing the four GEnx engines spool up. The large aircraft used a good chunk of the runway before lifting off and once airborne, the aircraft was quiet and allowed you to easily talk to the person next to you.

I was seated right in front of the right wing, which provided great views. I could easily witness the wings flex up, similar to the 787, but not quiet as dramatic. I was actually happy when we hit a pocket of turbulence, because I was able to watch the engines and wings do their dance.

It might take some training of the flight attendants to reassure worried passengers that the wings are supposed to do that. 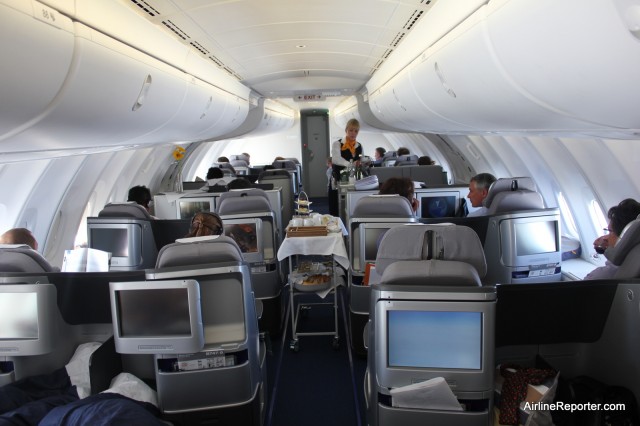 Moving a few times from the main deck to the upper deck, I  noticed that up top was a bit louder due to wind noise. It is not enough that a passenger would choose the main deck, but enough that it could be observed.

I know many of you are wondering; how does the Airbus A380 compare to the Boeing 747-8 Intercontinental? Well, it is not an easy comparison to make. I haven’t flown on an A380 in a while and without back-to-back flights, it is hard to award an overall winner.

In a beauty contest, hands down, the 747-8 takes the crown. The A380 is a cool looking machine that functions well, but it doesn’t have the grace (nor history) that the 747 has. In the noise department, I think the A380 probably wins out.

The A380 and 747-8I are both great aircraft with their own benefits, but have different missions. Really, with how Lufthansa configures their aircraft, the Airbus A340-600 probably competes more directly with the new Intercontinental than the A380 does. 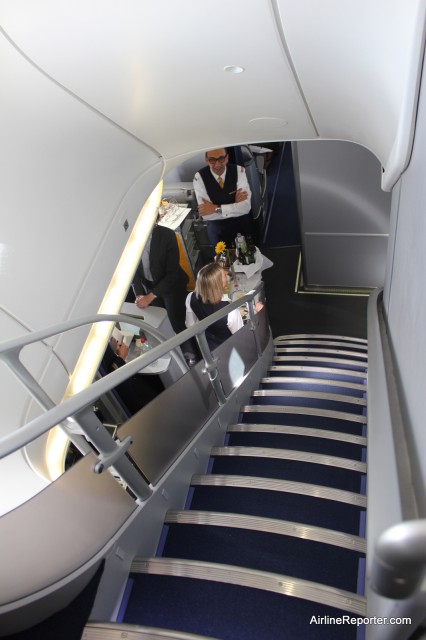 Down we go! it might not be the spiral stair case of the historical 747's, but it does the job.

During the flight, I had ample opportunity to put the new Business Class to the test. It is a huge improvement over the old product — which isn’t too shabby, but it is starting to show its age.

Each person is given plenty of room, a larger screen and a lie-flat seat. There are additional nooks to store things, an easier to use in-flight entertainment system and one of my favorite things that probably will go unnoticed:  the ability to put down your arm rest to have more room sitting or sleeping.

The in-flight entertainment system will be familiar to frequent Lufthansa flyers, but it is much crisper and quicker. There are additional viewing choices, but I would still like to see more. I am able to forgive the lack of choice, since the IFE offers a camera view looking forward and down from the front of the aircraft. 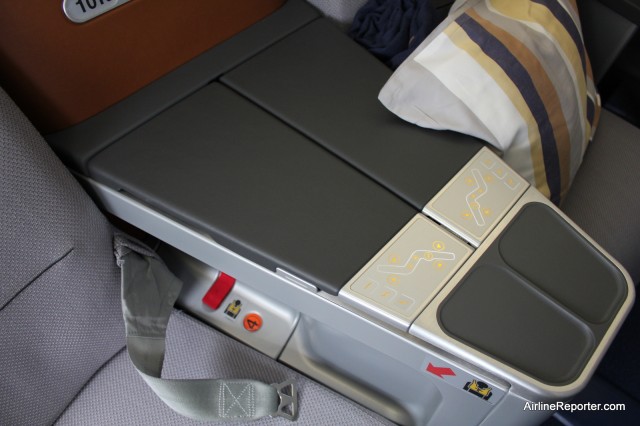 The center arm rest holds your head phones, remote, tray table, but you have to make sure your arm doesn't hit those buttons.

For me, the biggest drawback with the new Lufthansa Business Class is the placement of the seat controls. They have been moved from the remote to a prominent location on the front of the arm rest. On more than one occasion my arm would accidentally hit one of the buttons and my seat would start to unexpectedly move. Asking others who also made the flight, they didn’t seem to have the same issue, so maybe it was just me (and my muscular arms getting in the way — okay probably not).

I was planning on staying awake the entire flight to absorb the entire experience, but after a few celebatory cocktails and my lack of sleep kicking in, I crashed for about one and a half hours. Since the sleep caught me off guard, I did not put the seat in the lie-flat position, but I rested comfortably without waking up in the half-way position. I have to say that the new pillow and blanket are a positive improvement and it is sometimes the little things that count the most. 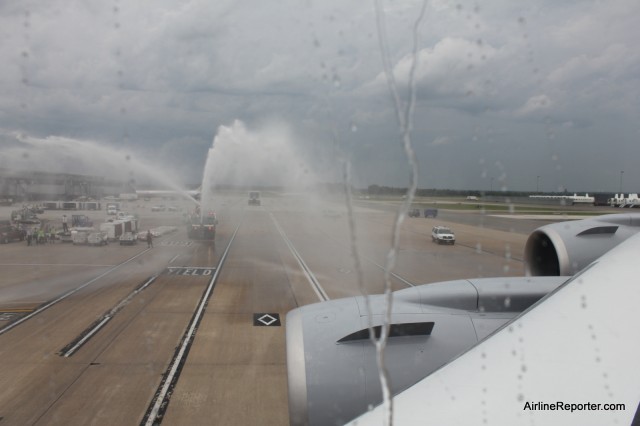 It is rare to get two water cannon salutes, but FRA gave us one leaving and this is IAD's one to us when we arrived.

When we started our descent, I wasn’t ready for the flight to end. The touch down was smooth and our welcome was warm. We had a water cannon salute at the gate and a group of media, guests and employees taking photos from the tarmac. We were escorted through customs and brought to an arrival party at the main terminal. Unfortunately, I wasn’t able to stay long, since I had to be off on my flight back to Seattle.

This 747-8I inaugural flight was much more than just a flight. It represents all the hard work (and patience) of all the people who worked so diligently to make it possible. I know that it sounds cliche, but I think this aircraft has been well worth the wait.

Lufthansa is planning on taking delivery of four more Intercontinentals before the end of the year and Boeing has stated on the flight there are other airlines (even ones in the US) that are showing interest in the 747-8. 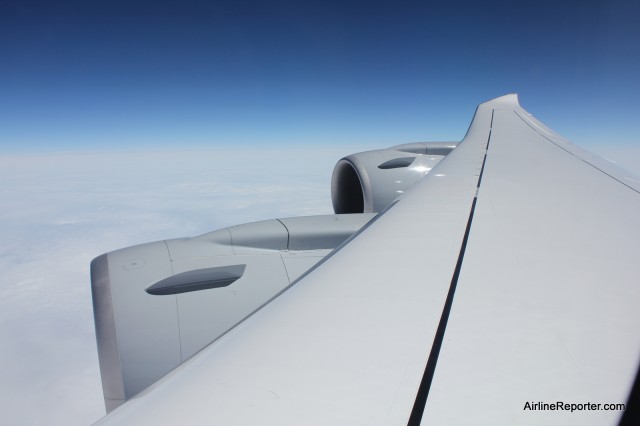 The photo doesn't do a great job showing the wing curve -- you will just have to go see it for yourself.

I am happy to celebrate the new Queen of the Skies initiation into revenue service. It starts with only one flight and one airline, but it won’t be long before millions are hopefully able to enjoy the benefits of the historical and new Boeing 747-8 Intercontinental.

Learn, Read, See More on the Flight:
* Photos on AirChive.com
* Video, photos and story on Jaunted.com
* Story on Wi-Fi on Lufthansa’s 747-8I via APEX blog
* Shots of us landing at IAD from @RacingWinds

I recently received an invite to head to Germany for about 24 hours before turning around and taking the first passenger flight on-board the Boeing 747-8 Intercontinental. How could I refuse?

I will be leaving Seattle (SEA) on a Lufthansa Airbus A330 non-stop to Frankfurt (FRA) before grabbing a seat on the inaugural flight from Frankfurt to Washington DC (IAD) on flight LH416. You better believe I will be sharing this experience as much as I can. Follow on Twitter and of course on the blog.

This is exciting for a number of different reasons. One of which is I have already taken a ride on one of Lufthansa’s Airbus A380s and I look forward to comparing that experience to the Intercontinental flight. It won’t be that easy, since the 747-8I is debuting Lufthansa’s new business class product, where the A380 I flew had their older product.