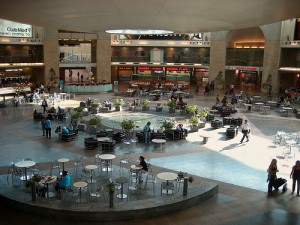 “It is mindboggling for us Israelis to look at what happens in North America, because we went through this 50 years ago,” said Rafi Sela, the president of AR Challenges, a global transportation security consultancy, in an interview with TheStar.com. He’s worked with the RCMP, the U.S. Navy Seals and airports around the world. “Israelis, unlike Canadians and Americans, don’t take shit from anybody. When the security agency in Israel (the ISA) started to tighten security and we had to wait in line for â€” not for hours â€” but 30 or 40 minutes, all hell broke loose here. We said, ‘We’re not going to do this. You’re going to find a way that will take care of security without touching the efficiency of the airport.”

Do the Israelis have a good security system? I think so, but I don’t think it could easily be used the exact same way in America. WeÂ definitelyÂ don’t do well with seeing people with large guns walking around and this system would beÂ vulnerableÂ to racial profiling. I do think looking at behavior profiling would be a better use of resources than spending money on machines that people can skip all together.