A special thanks to Sandy at the Future of Flight for taking this video! 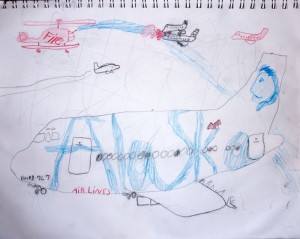 Who hasn’t doodled a few aircraft designs before? I know I have and I also know they kinda bite! But who cares? The passion for aviation doesn’t care if the plane can fly or not (Boeing and Airbus probably care a bit more). Inspired by Harry Windsor’s drawing of a new Boeing airplane for Alaska Airlines, the Future of Flight is holding The Harry Winsor Design Your Own Aircraft Show. You can be a professional or using crayons to enter. And the best part? EVERYONE WINS!

No matter how it turns out your drawing will be displayed at the Future of Flight from July 15th to July 30th and you will get an official badge. Come on now people! I know a lot of you out there have an interest in aviation and want to share it! No one will be judging. I will be drawing my own design and I know Sandy at the Future of Flight has already submitted her drawing that is 3D!

I know I will be heading on over to the Future of Flight sometime this week and add my own drawing to their collection.

To find out more and submit your creation(s) check out their website. 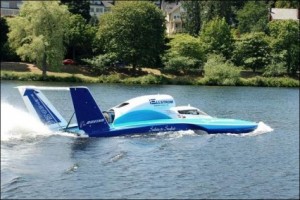 The Boeing U-787 hydroplane.

April 22nd, this Thursday, is Earth Day. It is a good reason to think about the environment and maybe get out there and plant a tree.

If you want to experience a little technology with your Earth Day, think about heading over the Future of Flight at Paine Field.Â  Among the other cool displays there everyday, you also get a chance to check out a few other earth-friendly things. Boeing will be showing off their bio-fuel hydroplane, the U-787. The boat is able to get up to 153mph using a 90% bio-fuel blend. Chip Hanauer, the hydroplane driver will be there to give autographs as well.

Tesla will be showing off their electric car, which gets 200 miles per gallon, but can still make it from 0-60 in 3.7 seconds.

The day starts at 11am and all the extras are included in their standard ticket prices. If you aren’t able to make it over on the 22nd, the car and boat will still be on display until April 25th. I plan to check it out on Thursday, I hope to see you there! 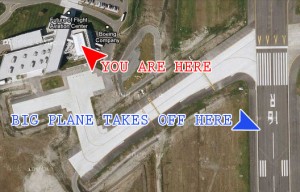 Do you want to watch the Boeing 747-8 take off from one of the best vantage points? Do you have an extra $125 laying around? Do you want your money to help support aviation? If you answered yes to those questions, do I have a deal for you!

The Future of Flight is offering VIP tickets to watch the Boeing 747-8’s first flight from their Strato Deck. I have been up there first-hand many times and I can say, the vantage point doesn’t get much better than this!

Go to their website to find out more and reserve your spot today! We still aren’t sure of the exact date yet, so you will need to be a little flexible. Official word is sometime during the first quarter, but I am hearing dates around January 28th to February 2nd. Much like the Boeing 787, the 747 will complete taxi tests before its first flight, so we will have a little bit of a heads up.

I will be volunteering for the Future of Flight this event, so if you are up top, I’ll see you there.