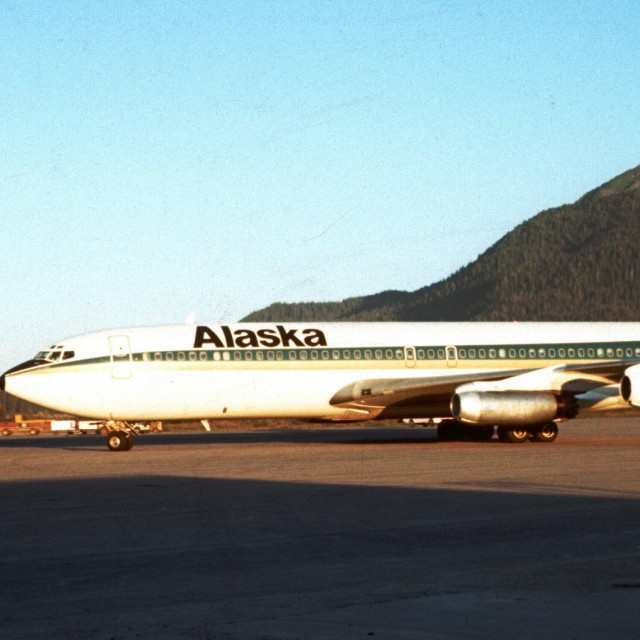 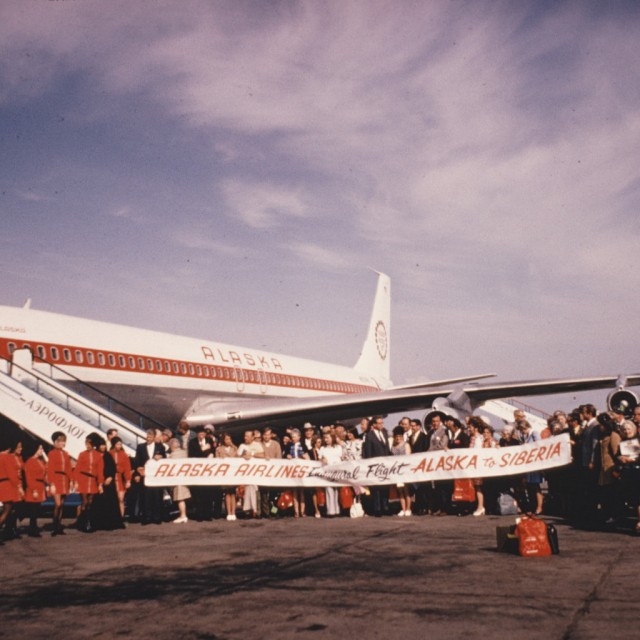 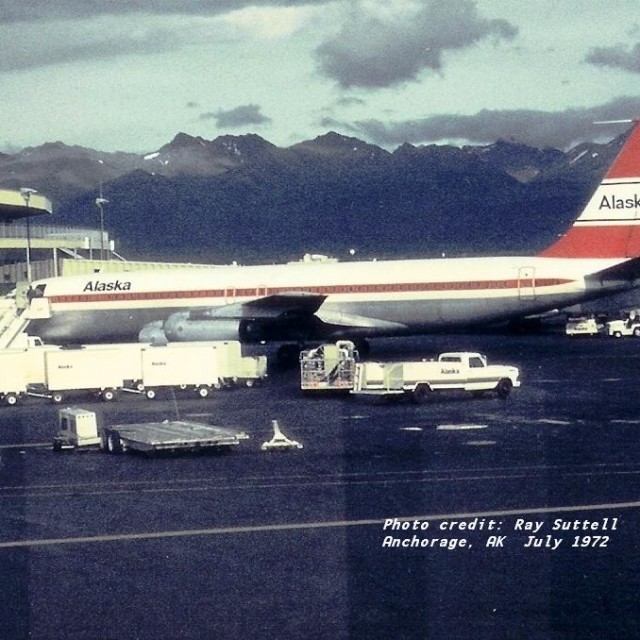 The photos above (which you can click on to see a larger version) shows three of the four Boeing 707s used. Here is a little Â history on each of the four aircraft:

Boeing 707-321 (N724PA) leased from Pan Am sporting Donaldson Airways (aÂ non-scheduled charter airline) dark green / gold stripes scheme and Alaska-addedÂ Eskimo on the tail blended in.Â  Suttell says, “I remember this plane very well while working as an air freight agent in JNU. Â In fact, I took a couple photos myself right from the freight shed as it taxied by.” N724PA brought much needed lift of cargo backlog SEA-KTN-JNU on flight 69 about three or four times a week in the summer of 1973 and provided the same needed capacity for passenger volumes at peak season. Unlike the other three Boeing 707’s, N724PA didn’t actually fly to Russia due to the poor economy. As discussed yesterday, N724PA was given back to Donaldson Airways and given a new registration number. Pan Am, then gave N724PA to a Boeing 747-200.

Boeing 707-331 (N705PA) leased from Pan Am with Air Florida reddish-orangeÂ stripes scheme and “Alaska” in black helvetica letters on the tail and sides. The aircraft was flown during the summer of 1972 for Alaska. After being with Alaska N705PA went to Globe Air and then hit the road andÂ traveledÂ the world. Last record I can find of her is a photo in 1981 of her being stored in Kuala Lumpur.

Boeing 707-321 (N727PA) leased from Pan Am. Â Red stripe with familiar “Golden Nugget Service” logo on the tail. Â This was the 707 that Alaska used onÂ the inaugural charter flights to Russia beginning on June 6, 1970.Â  There was great fan-fare in the local Seattle media news media about the whole Russia ground-breaking flights. Â  This Boeing 707 flew until 1980 when it crashed on landing in Bogota. Like N724PA, the registration number was used by Pan Am again and given to another Boeing 747-200.

I think if you are reading this blog, you probably have a pretty good idea what jetliner ended up winning transporting passengers across the Atlantic. However, at the time of this video, it wasn’t quite sure if the Boeing 707 would be able to beat out the Comet. The Comet had some serious issues with coming apart in mid-flight, but the Boeing 707 was an unknown new-comer. Boeing put a lot of money and hard work to make the Boeing 707 successful and it paid off. 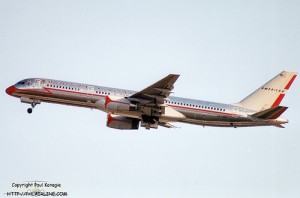 Classic video footage showing a Pan Am Boeing 707 arriving at JFK. Notice the 2-3 seating layout of the cabin.