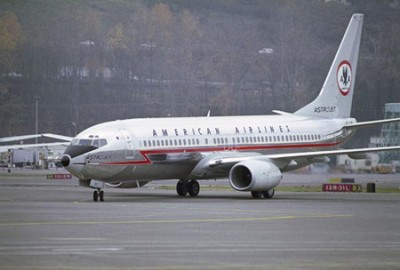 It was a fantastic looking livery. I remember the beautiful logo of The American Eagle wings with the double “A’s” and red lightning streak on the sides of the ship as a kid growing up in Cleveland. They also named the aircraft after various cities in their service network, such as “Flagship Memphis”. I had an uncle who had about 50 years with AA when he retired as Shift supervisor of mechanics at LAX. Sad to see AA buckle under to so called “modern” logos and schemes. But then AA’s reputation with the passengers continues to fight for last place. They need to replace management, starting at the top and work as far down as necessary, until the morale and image improve.

I don’t normally care about this livery business, but this is pretty cool.

If you think this looks good, the Asrrojet scheme on the leggy 757 looks breathtaking. I remember one morning with her at gate 28 at DCA, and my coworker Susan (now my wife), said “thats makes you proud to work for AA”. Mgmt would not consider repainting the fleet due to costs. Very bad decision.