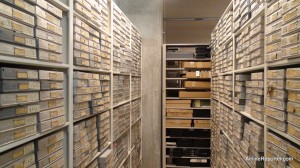 Inside the Boeing Archive. These are all films from Boeing's past. How awesome would it be to watch them all?

Boeing is one huge company. Currently, they have about 160,000 employees that do things from building planes to cleaning windows. The Boeing Company was first established in 1916 and has such an amazingly interesting history. What does a company like Boeing do to keep their history intact and make sure great ideas donâ€™t fall between the cracks? I didnâ€™t know, but I wanted to find out.

Recently I was fortunate enough to be invited to take a tour of the Boeing Archive and sit down with Boeing Historian Mike Lombardi. Since there was so much information to see and learn, I will present what I discovered in the archives in a three part series. In this first part, I will talk about the archives. Then in part two, I will share with you all the incredibly preserved Boeing models they have there. Finally, I will share my interview with Lombardi.

Even though most people associate Everett (Paine Field) and Renton (where 737â€²s are made) with Boeing in the Seattle area, the archives are housed in a Boeing complex in Bellevue, WA, which is located just east of Seattle. The archive in Bellevue is the main corporate archive and preserves the history of Boeing and the aviation history of North American/Rockwell. The archives are for current commercial business as well as Boeing corporate. 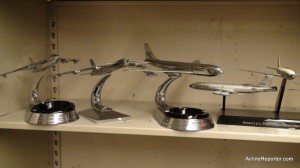 In the Vault: these classic Boeing ashtrays, which were very popular with Boeing engineers back in the day.

Over the years, the archive has grown to include other locations across the nation.Â  There are the Douglas archives in Cypress, CA (near Long Beach), where the history of Douglas is preserved as well. It also houses Boeingâ€™s current space and electronics related businesses that are in southern California. Boeingâ€™s archive in St Louis takes care of the history of McDonnell Douglas and Hughes helicopters and supports their current military aircraft and defense business.

I was quite fascinated with the multiple levels of security attached to the Bellevue archive.Â  First, guests must check-in at a public building to get their â€œEscort Requiredâ€ badge. Then, it is through a security gate where guests have to show said badge with their escort (who, for me, was the very helpful Bernard Choi with Boeing Communications). After the second security check, there are various doors one must go through that require a code before they reachÂ  the basement archives. 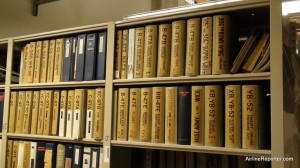 How cool would it be to have a few weeks to sit down and read all these?

Most of Boeingâ€™s history is housed in an earthquake resistant basement, where computer chips used to be made. There are long rows of boxes with models (which I will talk about in Part 2), posters, films and trinkets almost everywhere. I was surprised. I was expecting just to see rows and rows of boring brown boxes, but there was a lot of great eye candy.

Inside another door to the side of the archives is a long room that is constantly air conditioned. In this room, one can find thousands of Boeing videos of pretty much everything Boeing has done since video was created. They are mostly on old school film. They have information on 16 and 35mm motion picture film, 35mm microfilm, VHS, 1â€³ tape, 1/2 tape, 2â€³ tape, Betamax, DAT, CD, DVD and Laser Disc. That isnâ€™t even all the formats. Boeing is in the process of converting many of these items into digital formats. 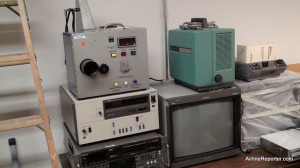 The Boeing Archives needs to keep a lot of classic viewing machines around.

What a job it would be to watch the videos to convert them over?! I did hint to Bernard what a GREAT TweetUp it would make to show a few of these old videos (Boeing 707 test videos anyone) to the general public.Â Not only does Boeing keep all the old formats, but they also must hold on to all sorts of format players. From 8-tracks to Laser discs, they have a vast collection of media players that could serve as its own mini-museum.

After checking out the videos, I got to check out the vault. Another locked room in a series of locked rooms. I would love to tell you what was in the vault but I canâ€™t, but let me tell you, it was amazing.

Ok, I am joking, I can tell you what was in the vaultâ€”pretty much all the prized possessions of Boeingâ€™s past.Â  Some of the items include gifts given to them by world leaders and items gathered by previous Boeing leadership. Also found in the vault are the meeting minutes dictating all the decisions ever made by Boeing and very valuable Boeing memorabilia.Â It was at this point I made the joke about how much all this stuff would sell for on Ebay. Heh, Mike didnâ€™t find it funny (ok maybe a little bit). Mike has a heart for all things that are Boeing and he hates seeing important trinkets being sold on Ebay for money. Many families of Boeing employees who pass away will happily donate their loved ones Boeing items to be preserved in history. Mike told me he often gets emails from people trying to sell Boeing items, thinking they have deep pockets, but Boeing is not in the business of buying memorabilia. 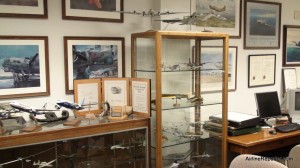 The Boeing Archive lobby had quite a few models, but that was nothing compared to what was inside the archives.

The archives are not just there to keep a hold of history.Â  They are also there to help the future. Boeing engineers will often come to the archives so they donâ€™t need to reinvent the wheel. If a Boeing engineer created a solution to a problem 30 years ago, current engineers can take a look at the old research and save time and money building off previous work.

So how does the general aviation nerd get access to the archives? Well the quick answer is that you canâ€™t. They allow visits by non-Boeing guest on an extremely limited case-by-case basis. It is limited to academic researchers, the media, Boeing customers, museum staff, and established authors.Â  However, enthusiasts can access Boeing archival information through theÂ Boeing Images website. With Boeing making more of their archives digital and making more of an effort to connect with fans, we can hope that more of the fun stuff will be made public.

Even though I got to spend over an hour in the archives, I could have easily spent years without getting bored. Tomorrow, in Part 2, I will be posting about all the amazing models that are housed in the archives.Â  In part 3, I will post an interview with Mike about his job and his thoughts on Boeingâ€™s past, present and future.Â  Stay tuned!