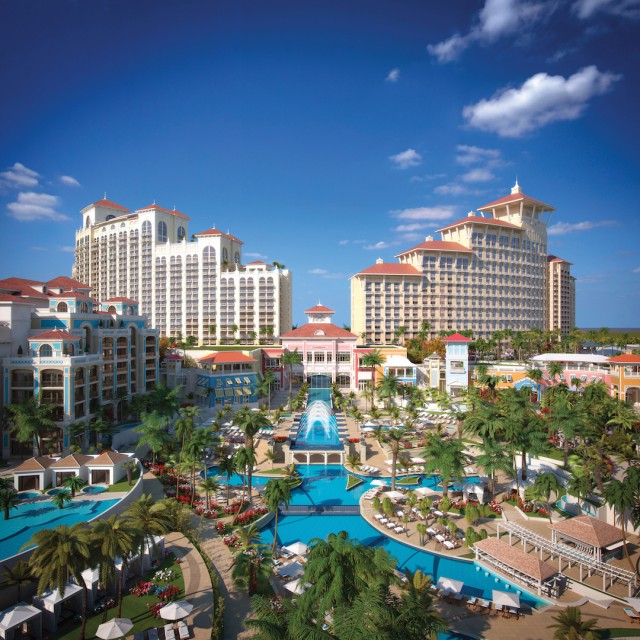 After an amazing tour of the new Nassau Lynden Pindling International Airport, we took the brief drive to the new Baha Mar development. Â As I mentioned in a prior installation, Baha Mar is a massive $3.5 billion development project which, when completed, will add nearly 25% capacity to Nassau’s lodging – all of it high-end. Â It seeks to compete not only with the “destination” resort on The Bahamas (Atlantis) but with the likes of Las Vegas.

The complex is a massive undertaking, with thousands of Â workers on-site and the majority of the project is financially backed by Chinese investors. Â Included in the development is a giant casino, high-end restaurants, a Jack Nicklaus golf course, and many other luxury touches.

BONUS:Â Part 1 of my trip to The Bahamas, which included the journey there and my amazing first night welcome. 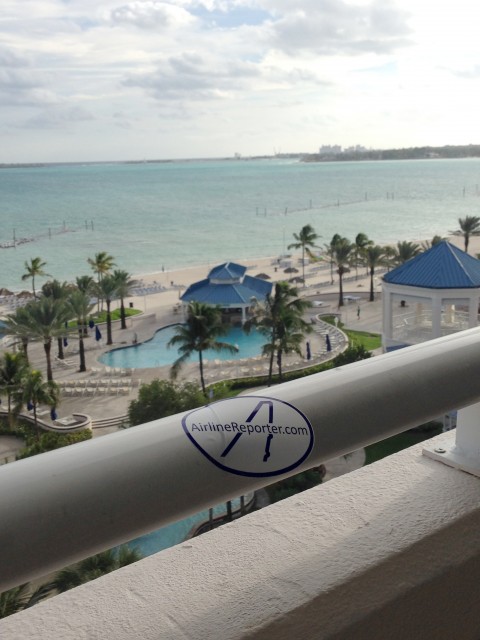 Mark and his wife on an AirTran Boeing 737's wing.

I wrote about Mark being on AirTran for 30 days near theÂ begining of the his journey and wanted to catch up with him at the end of his long journey. He was able to connect while over Ohio to answer some questions I had for him:

TheAirlineBlog.com: Where are you right now (“in an airplane won’t cut it” 🙂 )?
Mark Malkoff: I’M IN THE AIR USING GOGO WIFI HEADING TO CANTON, OHIO FOR A TAILGATING PARTY ON THE TARMAC. I’M HANGING WITH THE PRO FOOTBALL HOF AND HOF LEGEND ANTHONY MUNOZ.

TAB: What is your favorite picture taken during this whole experience ?
MM:Â  I REALLY, REALLY LIKE THE PHOTOS OF MY WIFE AND I HAVING OUR ANNIVERSARY DINNER ON THE WING OF A PLANE. AIRTRAN SET IT UP AND CATERED THE MEAL. IT WAS QUITE INCREDIBLE.

TAB: Tell me a little bit about the person sitting next to you right now.
MM: THE PERSON CURRENTLY SITTING NEXT TO ME IS MY CAMERA PERSON. HE MOST LIKELY SMELLS BETTER BECAUSE HE GETS TO SLEEP IN A HOTEL A NIGHT THAT HAS A SHOWER WHERE AS I SLEEP ALONE ON THE PLANE AND HAVE TO USE BABYWIPES IN THE AIRPLANE BATHROOM.

TAB: Who is the most interesting person you have met on this experience?
MM: IT WAS FUN SITTING NEXT TO FOOTBALL HOF LEGEND FRANCO HARRIS ON A FLIGHT TO PITTSBURGH. I LATER FOUND OUT THEY HAVE A STATUE OF HIM IN THE PITTSBURGH AIRPORT. WE TALKED THE ENTIRE FLIGHT AND HE EVEN TAPED A VIDEO WITH ME. I SHOULD ALSO MENTION THE FLIGHT ATTENDANTS ARE ALWAYS GOOD TO TALK TO. THE STORIES THEY HAVE ARE ENDLESSLY ENTERTAINING.
Â
TAB: What is the most interesting conversation you have had?
MM: FOR ME PERSONALLY IT WAS TALKING TO THE PILOTS ONE ON ONE. THEY REALLY BROKE DOWN MY FEAR OF FLYING INTO TERMS THAT HAVE FOR THE MOST PART CURED MY ANXIETY. MY MAIN ISSUE WAS TURBULENCE. ALL OF THEM SAID THE SAME KIND OF THING, “IT’S LIKE BEING IN AN OCEAN AND GOING OVER A WAKE. IT’S LIKE DRIVING OVER GRAVEL.” SO WHENEVER TURBULENCE HITS I DON’T LIKE IT, BUT I’M ABLE TO TOLERATE IT.

TAB: Will you ever eat pretzels ever again?
MM: I’VE CONSUMED MY WEIGHT IN PRETZELS. I THINK I MIGHT TAKE A FEW YEARS OFF FROM EATING THEM.

TAB: At this point do you have the SkyMall magazine memorized? Off the top of your head describe the Litter Robot (no cheating).
MM: I HAVE ALMOST THE ENTIRE SKYMALL CATALOG MEMORIZED. THE LITTER ROBOT I’M FAIRLY CERTAIN IS WHAT I REFER TO AS THE CAT SPACESHIP. IT WAS DEVELOPED BY NASA TO SEND CATS INTO SPACE WHERE THEY CAN NAP IN ZERO GRAVITY.

TAB: What is your favorite airline related joke?
MM: IT’S A BAD JOKE BUT MY DAD HAS BEEN TELLING PEOPLE THAT MY CAREER IS “TAKING OFF”.

TAB: This is not your first stunt like this; you lived in Ikea, lived in a Boeing, what’s next?
MM: NEXT IS A THIRTY DAY PROJECT WHERE I SLEEP IN A BED IN MY APARTMENT. I’M GUESSING IT WON’T BE AS INTERESTING.

Pretty amazing journey Mark has had over the last 30 days.