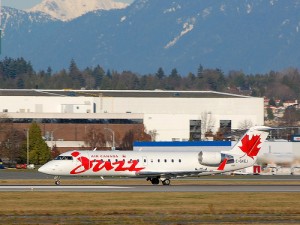 Canadair Regional Jet (B-6050) at Vancouver

Normally when I fly, my in flight entertainment is taking a nap. Recently Kris Lines was on Air Canada Jazz flight 8229 from Calgary to Vancouver when he decided to take a little nap in the back of the aircraft. His flight landed, passengers de-planed and no one woke Lines up.

Lines admits he is a heavy sleeper and was up for 24 hours traveling, but he isn’t invisible.

“It’s absolute craziness,” said Lines. “The last thing I remember was taking off from Calgary. I knew I was safely on board and there was no further destinations and it was all good.” He was confident that somebody would wake him up in Vancouver.

No one did. After his flight was de-planed, the aircraft was towed to a hangar and 90 minutes after landing a maintenance worker finally discovered Lines.

Flight attendants are human and mistakes can be made. However, things could have turned out much worse with this. What if was an unaccompanied minor? Someone would could have caused harm to the aircraft unsupervised?

Lines wrote to the airline looking for answers and MaryAnn Morgan, with the airline, responded, “Although there was no excuse for the incident that occurred, it appears the flight attendant on this occasion was dealing with several wheelchair passengers and coordinating their departure from the aircraft.Â  Although the flight attendant advises he did look back into the aircraft to check for any passengers still on board, he did not walk through the aircraft cabin as he was engaged with handling the passengers in wheelchairs requiring assistance.”

Morgan continued, “I can assure you that no previous incident of this nature has occurred and that this matter has been thoroughly reviewed with the crew member concerned and other crews operating similar aircraft to ensure an incident of this type does not happen again.”

She assured lines that the airline operates over 800 flights per day and this was an isolated incident. Lines was also offered a 20% discount on four future tickets with Air Canada. 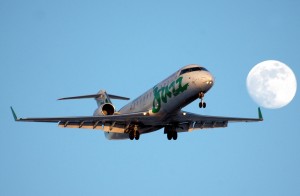 Stories of passengers getting kicked off a plane for unruly behavior is nothing new. But being kicked off for smelling so rancid is still a unique story.

On February 6th,Â  a smelly passenger flying on a Air Canada Jazz flight from Charlottetown to Montreal was asked to leave the flight.

The plane was waiting for take off when passengers started complaining about the smell. The stinky passenger was moved, but it didn’t help the problem. The airline asked the man to leave the plane and he did. It ended up only delaying the flight about 15 minutes, but worth it to the passengers left on board.

“Because of privacy reasons, I really can’t provide specific information on the passenger who was involved or the reason for the deplanement. But I can confirm that there was one passenger deplaned from our flight,” Manon Stuart, a spokesperson for Air Canada Jazz, told CBC News Wednesday. The airline continued, “the safety and comfort of our passengers are certainly our top priorities, so any situation that is perceived as a threat to either the safety or the comfort of our passengers is taken seriously.”

The smelly passenger was allowed to fly another flight the next morning.