Odds are pretty good that you have seen a little Cessna 172 high above you at the beach hauling an advertisement banner in tow. But have you ever wondered how exactly the process of attaching that banner to the aircraft works? Does the pilot just take off with the banner dragging down the runway? Is the banner deployed at some point in flight? Actually, the answer is way cooler than you would ever think.

Sammy1Mason recently posted a great video that breaks down the awesome procedure of attaching a banner to an aircraft. The process starts with the aircraft already in flight, and the banner waiting for it on the ground. The banner is attached to a cable which is suspended by two vertical poles parallel to the runway.

To pick up the banner, the pilot must “dive” towards the poles in pretty dramatic fashion. Just before snagging the cable, the pilot must then pitch up to reduce speed as the banner is dragged into the air. Once everything is hooked up, the banner trails the aircraft by about 300 feet. Attaching the banner may not be as difficult as snagging the arresting cable on an aircraft carrier, but it sure looks like it takes some time to master.

While the process to attach the banner to the aircraft is pretty awesome, the process to get it back on the ground is pretty simple. The pilot lines up with his intended target and releases it, hoping the wind doesn’t force it too much off course. 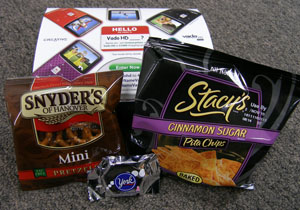 Some of the snacking goodness you will find in the box! Photo from Clint @ Horizon -- Thanks!

I love watching TV on the internet. I don’t even have cable anymore. Yea I still have to sit through a few advertisements, but totally worth it to get 100% free online shows. There have been many instances where looking at ads get you free stuff. Now Horizon Airlines and Air Advertainment are bringing a limited number of passengers free food!

On May 24th passengers on Horizon Air flight 2631 from Seattle to Portland were able to experience the first free food. The first test is being sponsored by Creative Labs, which is promoting a Facebook contest to name a new video camera. The boxes include a variety of snacks and over the next 20 days some 25,000 boxes will be handed out to Horizon passengers.

â€œWith certain airlines cutting services and adding charges, this program is a welcome addition for passengers and operators alike,â€ said Mary L. Macesich, co-founder and Vice President of Air Advertainment. â€œPassengers are thrilled to receive a snack or bite to eat, the airlines are excited to be able to provide it at no cost, and the brand finally has the ability to connect with the public in captive environment where they are spending time, largely undistracted. All with a social media kick.â€

There is a lot of potential here, since passengers are stuck (well, I love flying, so I never see it as “stuck” but most people do) in the airplane and now have something to entertain them. Like reading the ads on a bus for entertainment purposes.

Companies could also advertise on the boxes and put coupons like “take this to our Seattle/Portland location and get 20% off.”

“We can broadcast in a big way to build a brand image or be really razor sharp with accuracy just like in the Seattle-Portland market,” Mr. Matway said. He said the demographic of the Horizon airline passenger flying that route is of a very tech-oriented and sophisticated traveler with an income of more than $100,000. “Marketers have asked if they could control all of the flights into the [consumer-electronics show] or sporting events like the Super Bowl,” Ryan Matway, president of Air Advertainment told Adage.com.

I like this. It is a win-win-win for all involved. Depending on the contract, airlines could actually walk away making money on giving away free food. Airlines could MAKE MONEY giving out food and passengers pay nothing? How could other airlines not want to add this service?

Jen Boyer Manager of Media Relations for Horizon Air told me that, “passengers have reacted very favorably to the snacks.” When I asked if Horizon is making money off this arrangement, Boyer explained, “While we don’t normally comment on our business practices with other businesses, I can tell you our primary motivation in this partnership was to elevate our inflight services for our customers. Now, in addition to free Northwest wines and microbrews, Starbucks coffee, water and sodas, we offer a nice snack pack free of charge.” If things go well, Horizon is hoping to add the free snacks on additional flights.

Cheers to both Air Advertainment and Horizon for making this work and I hope to see these on more flights in the future!