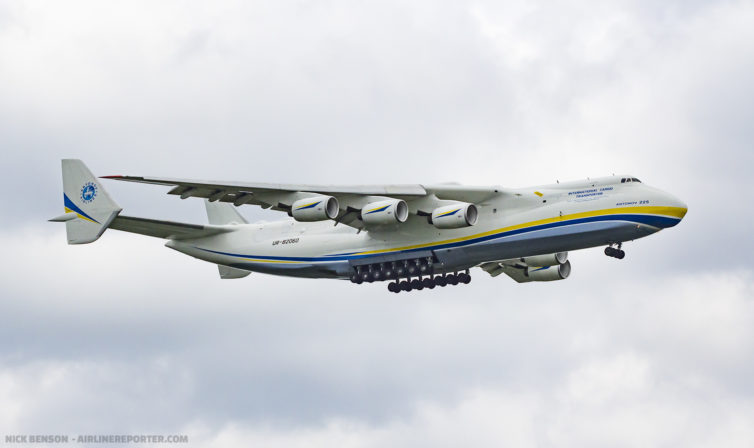 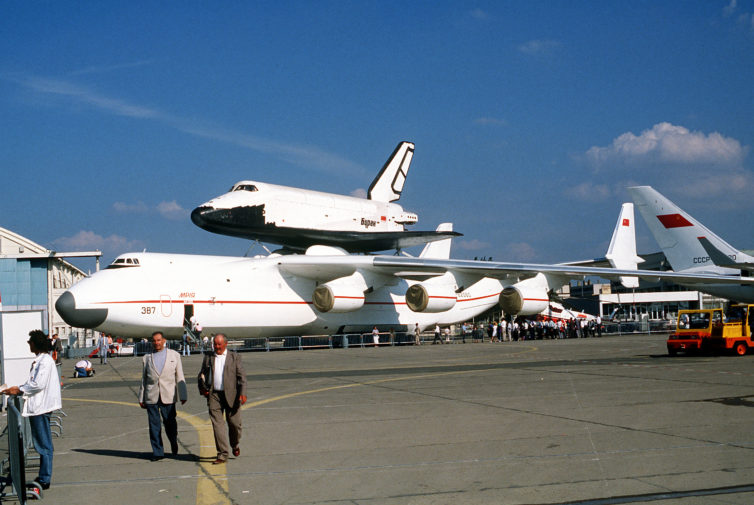 The An-225 and Buran at the Paris International Air and Space Show in 1989. Photo: Master Sgt. Dave Casey | WikiCommons

The An-225 Mriya was conceived to carry the Buran-class spaceplane, which was Soviet Union’s answer to the Space Shuttle. The heaviest and longest aircraft ever built, it made its first flight in 1989 and entered commercial service in 2001. It’s flown by Ukraine’s Antonov Airlines, a sister division of the company that built her. Only one, tail UR-82060, was built and flown, though second copy has been about two-thirds of the way done for years – it seems unlikely we’ll ever get to see the two of them operating side by side.

Designed by Viktor Tolmachev, the An-225 a clear derivative of his successful An-124, with a stretched fuselage, wider wingspan, extra pair of engines, distinctive shoulder blades atop on the fuselage, along with a few other lumps and bumps to help secure rooftop cargo that’s otherwise incapable of making it through the hinged nose. The An-124 also has a rear cargo door, which was omitted from the An-225 to save weight.

New spotters often confuse the An-124 and An-225; the smaller An-124, above, has a conventional tail and four engines. Photo: Nick Benson 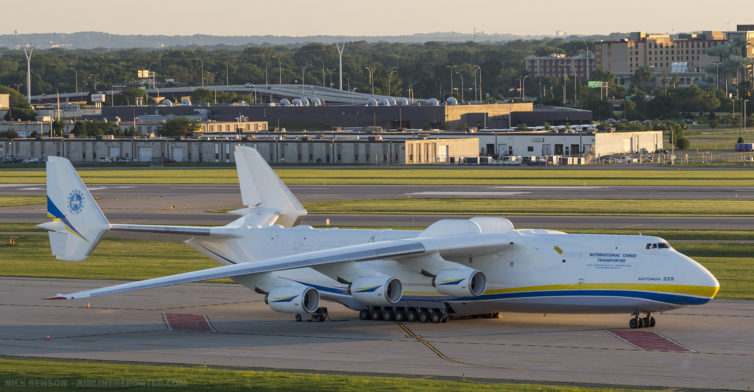 The An-225 is distinguished from its smaller siblings with a unique twin tail, six engines, and distinctive shoulder blades. Photo: Nick Benson

Seeing the An-225 arrive on my first plane-spotting trip was probably enough to really get me interested in the hobby, but the icing on the cake was the fortunate coincidence of thunderstorms in Chicago while the Mriya was here. The severe weather meant we saw handful of diversions that’d be enough to raise the blood pressure of even the most seasoned Twin Cities aviation enthusiast.

An Atlas Air 747-8F from Anchorage, a United 747-400 from Shanghai, and a United 757-200 from San Francisco, all in the frame here, all diverted to MSP on account of bad weather at ORD while the An-225 was in town; none of the four were regular visitors here. Not bad for my third spotting trip to the airport! Photo: Nick Benson

The Magic of Mriya

Part of what makes spotting the An-225 Mriya so darned cool is that it always draws a crowd. Sure, well-informed enthusiasts will show up in good numbers whenever any Antonov product comes to town, but when the An-225 is coming and going (and we’re not in the midst of a pandemic), it makes the news and large numbers of the general public show up to witness it. 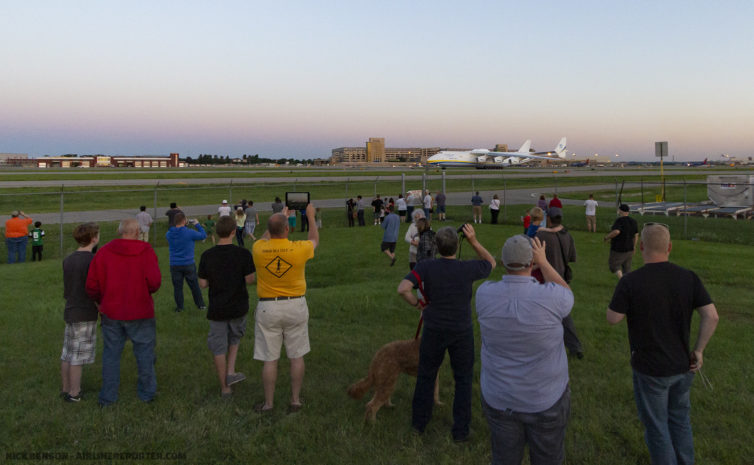 The An-225 lumbers along as onlookers enjoy the show. Thousands of people came to MSP to see this departure. Photo: Nick Benson 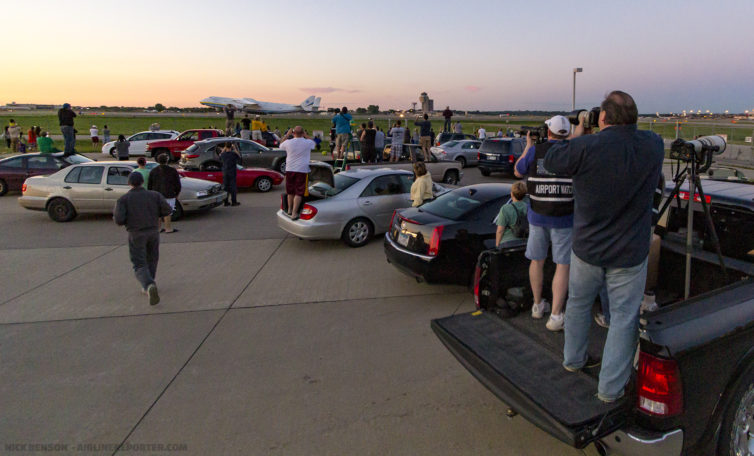 Enthusiasts, new and old alike, witness what’s likely to be one of the longest take-off rolls in Minneapolis/St. Paul International history – for reference, the last few wheelsets of the main gear are still on the ground where arrivals coming from the opposite direction typically touch down. Photo: Nick Benson

On this fabulous July evening in 2014, thousands of Twin Cities residents witnessed the An-225 depart. How many made great memories with loved ones that wonderful evening? How many made the first of many trips to the airport to witness the magic of flight that night? How many of them found a new passion? How many eventually got jobs in the industry?

It’s not hyperbole to say the visit of the An-225 at MSP was a defining moment for me; in the six years since I’ve been fortunate to meet many wonderful new friends, photograph what turned out to be a fleeting golden age of commercial aviation at many airports across the country, and grow a side-project that notifies enthusiasts of visits from interesting aircraft into a full-time job. The full impact of the An-225 will never really be known. 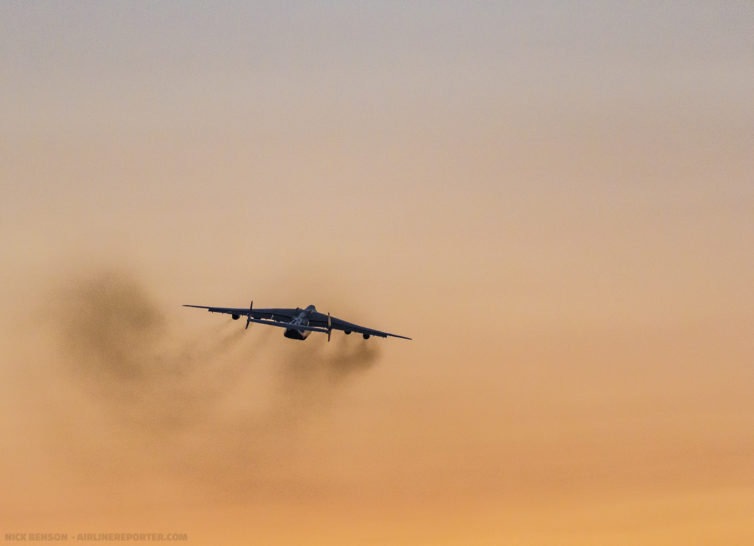 Do you have a similar story that made you an AvGeek, or has it been a life-long passion? Feel free to share your thoughts in the comments!

https://jettip.net
AvGeek Pop Quiz: Do You Know These Airlines?
Au Revoir Air France A380: This Grand Dame was Getting a Little Lame
2 Comments

My father served aboard aircraft carriers in the Navy, and his home movies of flight operations captivated me as a kid. “Top Gun” caused me to take a real interest in military aviation. The book “Chickenhawk” introduced me to rotary wing aircraft. But it was when I took a job as an aircraft fueler in Austin, TX that I really grew to enjoy aviation as a hobby. The first time I fueled a 747 I was in awe, and it’s my favorite plane to this day.

I know that Top Gun for sure influenced me greatly — still does. I am hoping the sequel does the first movie justice! And I have to imagine that it would take quite a bit of time to get a 747 fueled :).