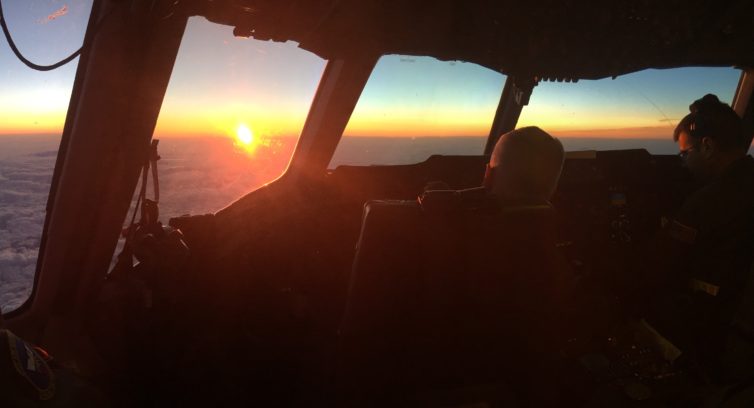 Australian flag carrier Qantas Airways recently completed the first-ever commercial flight from New Yorkâ€™s JFK airport to Sydney. As part of a program dubbed Project Sunrise, the flight was a nearly 20-hour marathon that traveled just under 10,000 miles. Operated by a brand-new Boeing 787-9 on its delivery, it was one of three test flights the airline is doing to explore the viability of a non-stop service from JFK-Sydney. There were only 40 passengers onboard â€“ all test subjects for Australian researchers and Qantas, who hope to perfect ultra-long-haul flying.

Number 21 on that list is Newark to Hong Kong â€“ which, when launched in 2001, was the longest flight in the world. Ultra-long-haul flying has become an arms race since then â€“ with every airline seemingly trying to outdo the next with mind-numbingly long flights.

While there was much hype surrounding Qantasâ€™ flight, ultra-long-haul flying has almost become commonplace. This flight was more of a PR stunt than anything, but was impressive nonetheless based on the history of how we got here.

Before it ever touched oceanic airspace, Qantas flight 7879 had to cross the Continental U.S. This is something few appreciate today, but the first transcontinental flight in 1911 took 49 days and 70 stops. The first pilot to do it, Cal Rodgers, suffered 15 crash landings, a broken leg, and numerous hospital visits along the way. Cal hoped to accomplish the flight in 30 days â€“ which would have earned him a $50,000 prize ($1.3 million today). Despite his arrival 19 days late and numerous injuries, he still had the willpower to complete the journey, paving the way for incredible aviation advancements to come.

The next challenge for QF7879 was the oceanic crossing. Of course, everyone knows the about Charles Lindbergh. While he was the first person to successfully cross the Atlantic solo in 1927, he was not actually the first aviator to cross the Atlantic nonstop. That fete was accomplished in 1919, by John Alcock and Arthur Brown in their Vickers Vimy, in an attempt to win Â£10,000 ($650,000 today). Just like the first transcontinental flight, this one was not without incident. The two pilots struggled to control their aircraft â€“ at one point losing situational awareness in the weather, dropping more than 4,000ft of altitude and nearly impacting the ocean. They also crashed on landing in Ireland (both survived). 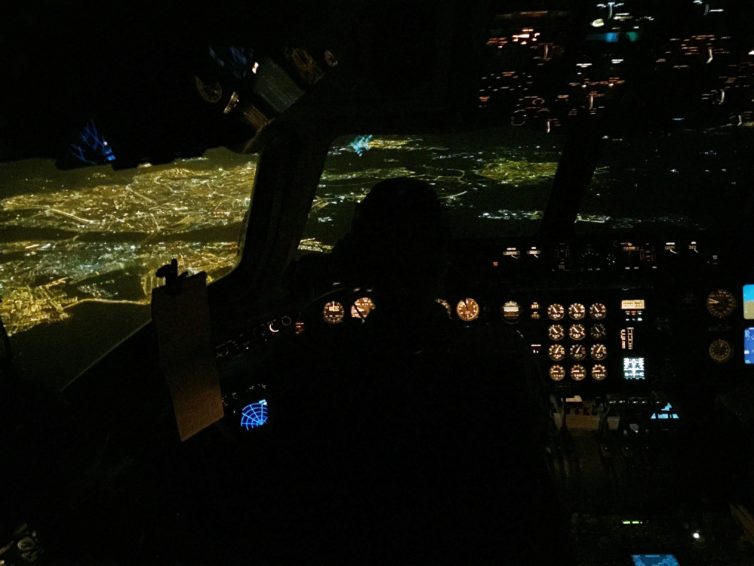 The Atlantic is easy, in comparison. The 1919 crossing covered a mere 1,890 miles. It is nearly 2,400 miles from San Francisco to Honolulu, and 7,500 miles from Los Angeles to Sydney. Members of the U.S. Navy were the first to â€œsuccessfullyâ€ make the journey from the U.S. West Coast to Hawaii in 1925. The crew, flying a Navy PN-9, had to rely on ships prepositioned along the way to offer navigational data. The crew ended up ditching at sea 300 miles short of their target, and sailed the remainder of the distance using the wing fabric as a makeshift sail. A competition in 1927 to successfully fly the route (without sailing the final 300 miles) ended with the deaths of dozens of aviators who were lost at sea.

Regular non-stop commercial service between the U.S. and Hawaii didnâ€™t begin until 1936, when Pan Am commenced its service from San Francisco to Honolulu. Richard F. Bradley, the first revenue passenger, spent the equivalent of nearly $1 million to be on the flight. Pan Amâ€™s service operated once a week, and only carried a few thousand passengers in the entire decade after the launch of the flight.

Oceanic flight, back then, navigated by what is known as dead reckoning. Dead reckoning is defined as the determination without the aid of celestial navigation of the position of a ship or aircraft from the record of the courses sailed or flown, the distance made (which can be estimated from velocity), the known starting point, and the known or estimated drift. Many flights never made it to their final destinations due to dead reckoning errors. Even Charles Lindbergh suffered from navigational issues on his oceanic crossing â€“ relying solely on his clock and compass to navigate the crossing, finding himself off course several times during the flight.

History of Commercial Service Between the United States and Australia

The first flight between the United States and Australia was made by Charles Kingsford-Smith and his crew of three in 1928. Kingsford-Smith made the journey in three flights â€“ stopping in Hawaii and Fiji. They successfully arrived in Australia, but were 110 miles off course.

It was another 12 years before commercial service began. Pan Am commenced regular flights to Auckland, New Zealand in 1940. From there, connections could be made to Australia, marking the first time the United States and Australia were connected by air. The trip that once took 17 days by steamer became possible in only four. 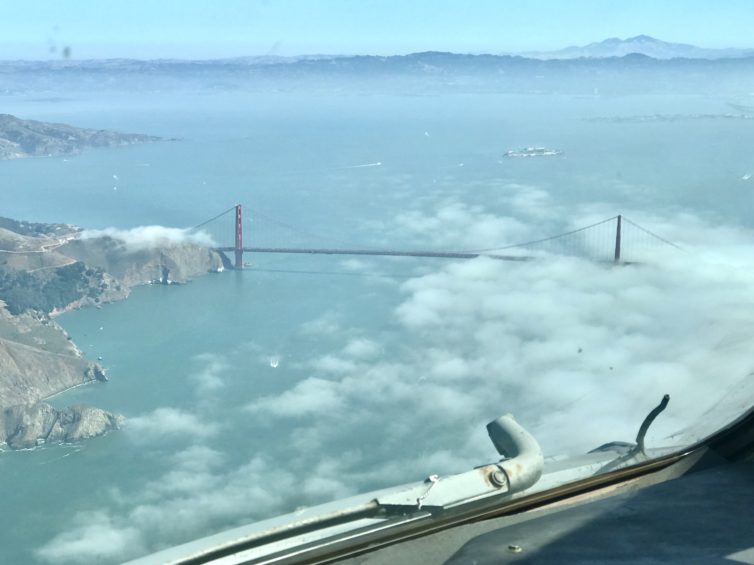 Qantas began flights to the United States in 1954 using a Lockheed Super Constellation. The flight to San Francisco, which took 30 hours, stopped for fuel in Fiji, Canton Island, and Hawaii. It wasnâ€™t until 1982 that the first non-stop flight between the two countries began. Pan Am did it using the newly introduced 747SP, the only airplane with the range capability at the time.

In distance alone, the non-stop flight between New York and Sydney is made possible by incredible technological advancements in the newest generation of aircraft. But a flight operated over the Pacific by a twin-engine airplane is a relatively new development. Twins are restricted by what is known as extended-range twin-engine operations, or ETOPS. Under ETOPS, airplanes with only two engines must be within a certain flight time of a suitable alternate airport.

Until 1985, twin-engine airplanes were limited to flights within 60 minutes of a suitable alternate â€“ essentially making it impossible for twins to fly from the United States to Europe, Hawaii, or beyond. This is how the term â€œfour-engines for long-haulâ€ came to be. When Boeing initially developed the joint 757/767 program, it envisioned the expansion of what was known as the 60-minute rule. When it approached the FAA in 1980, then FAA Administrator Lynn Helms replied, â€œItâ€™ll be a cold day in hell before I let twins fly long-haul over-water routes.â€ 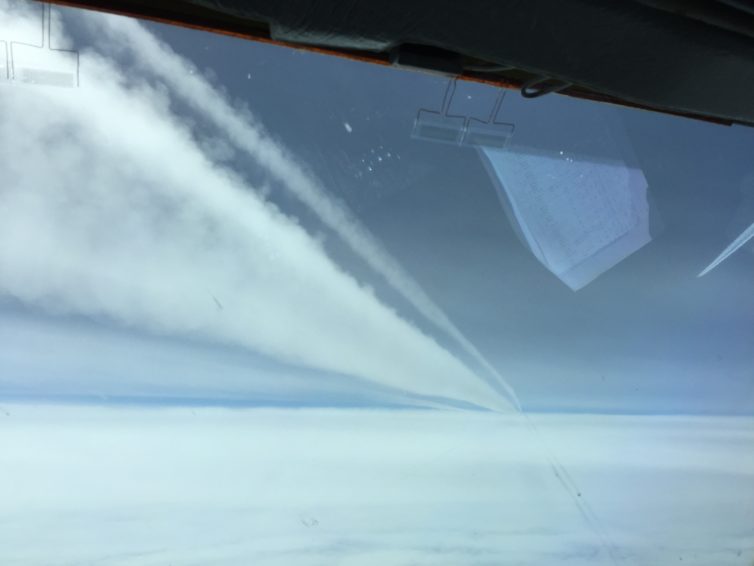 The 60-minute rule was extensively studied during the early part of the 1980s. Engine reliability had proven the antiquated rule to be outdated. In June 1985, the FAA issued Advisory Circular 120-42, which officially defined the process for airlines to obtain 120-minute extended operations approval â€“ thus allowing twins to fly the most direct Transatlantic routing.

Long-Haul Takeaway from a Long-Haul Pilot

The history of long-haul flying is remarkable. We have come incredibly far as a civilization â€“ the fact weâ€™re even talking about linking New York and Sydney with a nonstop flight is a major accomplishment. Qantasâ€™ Project Sunrise test is a great avenue for the airline to receive free publicity. However, despite the relatively short history of ultra-long-haul flying, what Qantas is doing isnâ€™t unique. 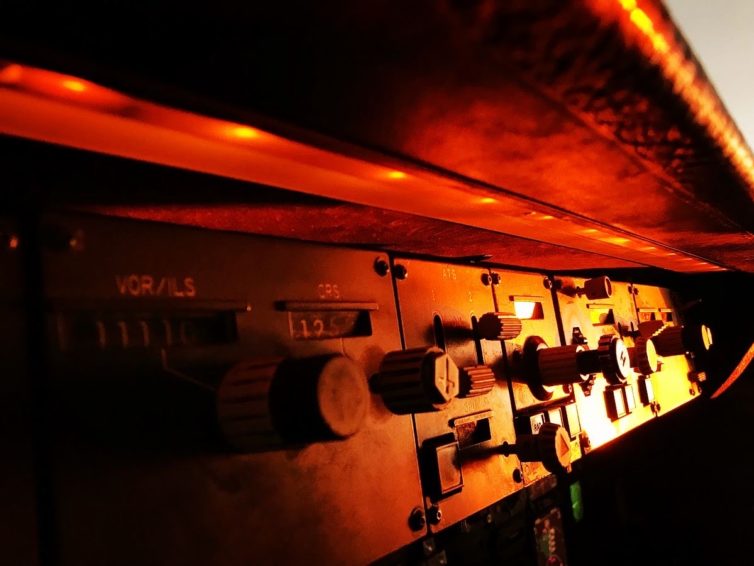 I do not operate for an FAA Part 121 or 135 carrier, so Iâ€™m not bound by the same rules as Qantas pilots or pilots from other commercial airlines. As a pilot who has done my fair share of 12- to 18-hour flights, plus many days with multiple eight-plus-hour flights in a 24-hour duty day, there honestly isnâ€™t much to it. Many of my 12-hour flights have been operated with just two pilots, and my longer flights have sometimes had just three pilots. The bottom line is that it is exhausting â€“ no matter the infight diet, exercise routine, or crew rest schedule.

Each crewmember and passenger are different and will require a different approach to adapting to a nearly 20-hour flight. Because of this, there is not a one-size-fits-all approach. I commend Qantas for trying to gather data to make the experience better for its crew and passengers. But, at the end of the day, each person needs to learn their routine and adjust accordingly.

For pilots, long-haul flying is both exhilarating and incredibly dull at the same time. The majority of the worldâ€™s long-haul routes travel out of radar coverage for extended periods of time. This requires the crew to report navigational positions at each waypoint, which is approximately every 45 minutes. This is done through either voice communication using high frequency (HF) radios, or satellite-based text communications.

Without radar, air traffic control relies on pilotsâ€™ position reporting to monitor the progress of the flight to ensure deconfliction of airspace and safe progress of each flight. Flights are assigned a cruising altitude, Mach number (airspeed to fly), and a routing. This ensures adequate spacing between aircraft that often operate on the same routes and altitudes. 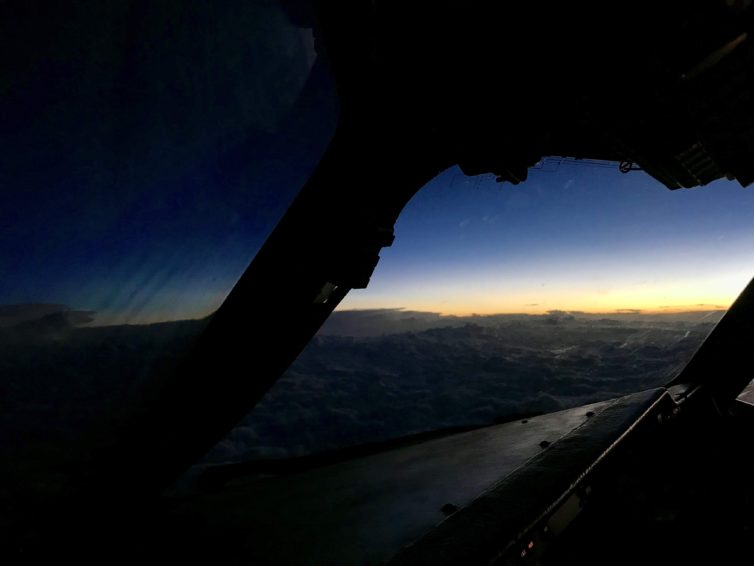 The last rays of the day slip below the horizon on a Transpacific crossing – Photo: Doug Zschoche | Officer Wayfinder

Most airplanes are now equipped with navigational equipment that sends position reports every two to three minutes, but pilots are still required to verify the time and location at each waypoint. To ensure proper separation from other aircraft, pilots must cross the waypoint within two minutes of the estimated time that was passed in the previous position report. Anything outside of two minutes is considered a gross navigational error, and likely results in a violation for the crew. Therefore, it is imperative to keep a watchful eye on the progress of the flight, and update ATC with changes for the estimated time to the next point if it drifts by more than two minutes. Oceanic flight is an amazingly choreographed dance that goes off without a hitch thousands of times each day.

I’d wanted to be a long-haul pilot for as long as I can remember. There is just something magical about knowing the plane flying overhead is jetting off into the night, to arrive on the other side of the world at daybreak. I am living my dream â€“ all possible thanks to the incredible aviators that blazed the way.

Regardless of how you feel about ultra-long-haul flying, or long-haul flying in general, everyone must appreciate how far aviation has advanced in its relatively short existence. A non-stop flight from New York to Sydney is yet another incredible achievement in aviation history. 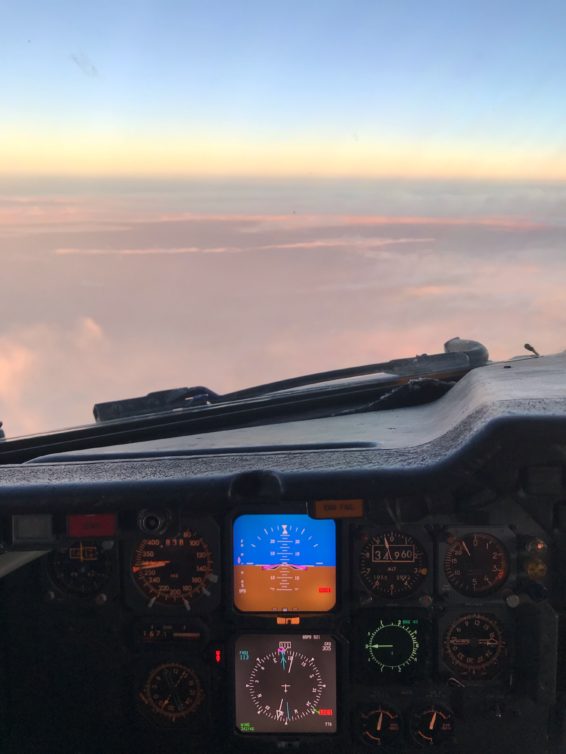 CONTRIBUTOR - IN THE SKY.Doug is not only a lifelong AvGeek, but is also a decorated combat pilot with nearly 3,000 hours. He possesses an Airline Transport Pilot license and is type rated in the McDonnell Douglas DC-10, where he is certified as an Instructor Pilot and Evaluator Pilot. Additionally, he has logged over 600 hours of oceanic flying and is certified to teach oceanic procedures to unqualified pilots. Doug has a Master of Business Administration in Aviation and runs the Officer Wayfinder Travel Blog â€“ offering insightful travel information, news, and reviews.

https://www.officerwayfinder.com/
Learning to Fly with Francis: Dealing with the Pacific Northwest Winter Blues
Airline Memorabilia is Pretty Much the Best AvGeek Gift Ever!
1 Comment