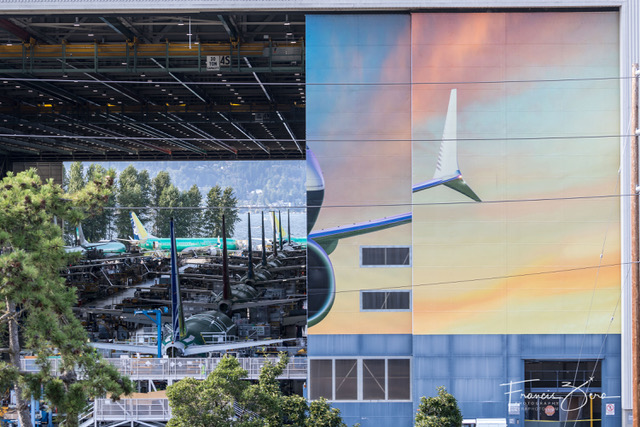 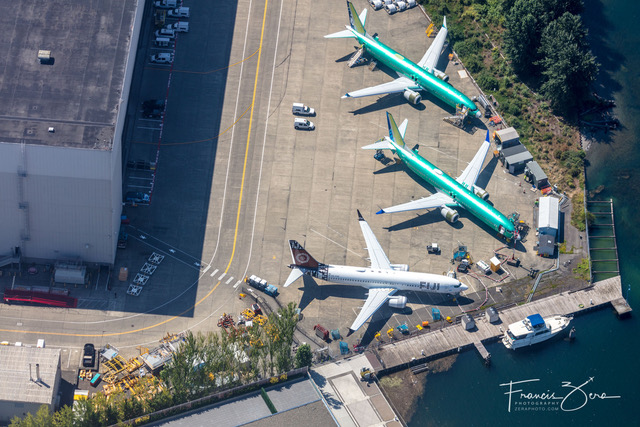 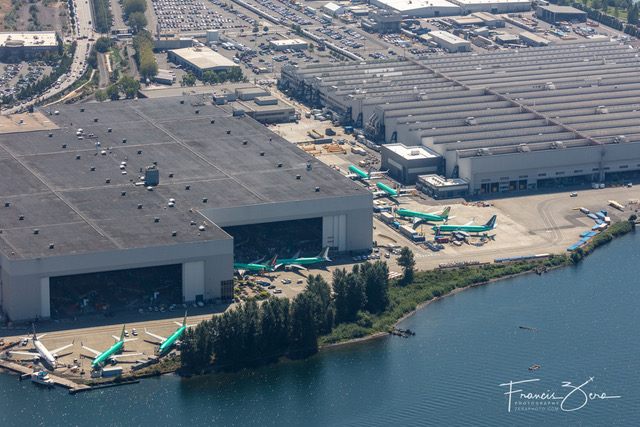 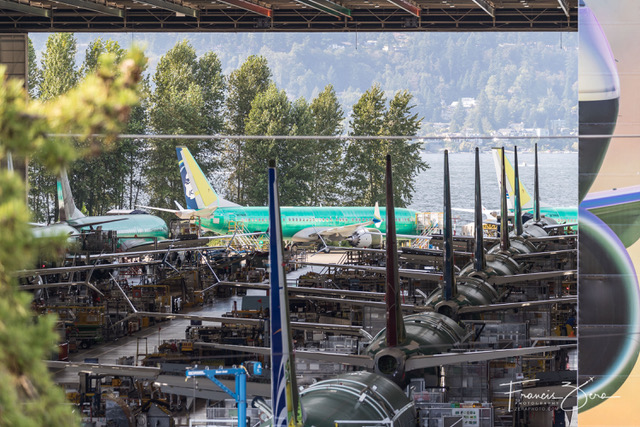 All those 737 tails lined up in the Boeing factory 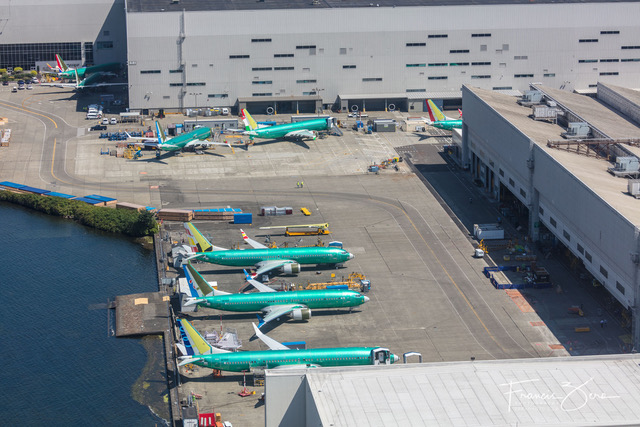 Can you identify which airlines these 737s will be delivered to… someday? 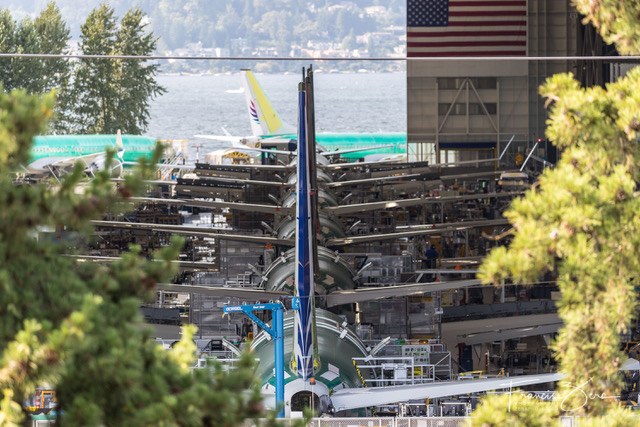 All the 737s lined up in the factory, looking out to Lake Washington 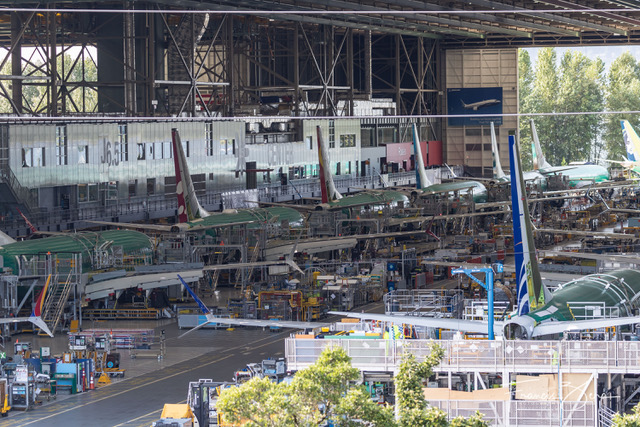 A little different angle into the Boeing 737 factory 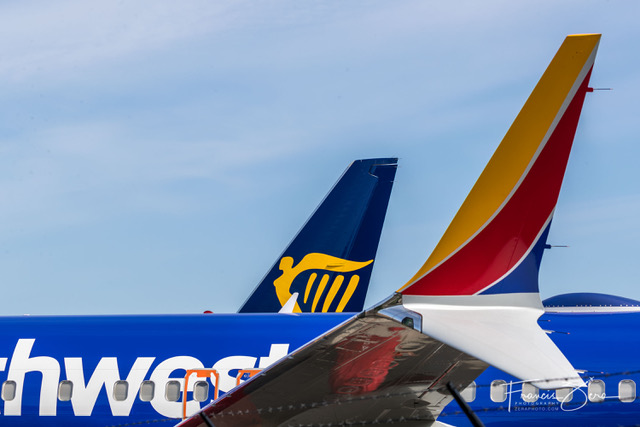 That special winglet makes the MAX easy to identify

An aircraft emblematic of corporate greed and regulatory negligence.

Nothing beautiful about greed and negligence.

It is a shame. Can’t wait for Boeing to get there act together. Aircraft has a long pedigree. Bean counters out of the way and let engineers vet it right.

I certainly think that Boeing deserves a lot of negative press for this, but to write off the MAX issues as being only about their greed and negligence, while not being equally critical of airlines for putting very inexperienced pilots on board is irresponsible. There is an awful lot of blame to go around.

Your evidence that the pilots were inexperienced is awaited.

The flight’s cockpit crew were captain Bhavye Suneja, a 31 year old Indian national[11] who had flown with the airline for more than seven years and had about 6,028 hours of flight experience (including 5,176 hours on the Boeing 737);[12] and Indonesian co-pilot Harvino,[13] who had 5,174 hours of flight experience, 4,286 of them on the Boeing 737. The six flight attendants were also Indonesian.[14

The pilots (and by the way, I am a pilot. I do not criticize pilots or the dead lightly) in both accidents made some pretty egregious errors. The Ethiopian FO had 361 hours when he died. That”s a criminal lack of experience to be handling a transport category airplane. I without doubt believe those same accidents would not have happened in most of the aviation world with better trained, more experienced pilots. Yes, Boeing deserves enormous criticism but to end the conversation there is to only look at a portion of the picture.

After both accidents, the flight-data recordings indicated that the immediate culprit was a sensor failure tied to a new and obscure control function that was unique to the 737 Max: the Maneuvering Characteristics Augmentation System (MCAS). The system automatically applies double-speed impulses of nose-down trim, but only under circumstances so narrow that no regular airline pilot will ever experience its activation unless a sensor fails. Boeing believed the system to be so innocuous, even if it malfunctioned, that the company did not inform pilots of its existence or include a description of it in the airplane”s flight manuals.

So, what were the egregious errors?

I”m not trying to be sarcastic, but I”m guessing you didn”t read the whole article…or perhaps even a majority of it. I think the point is made very clearly and, honestly, repeatedly.

I read the NYT article when it was published, and have read much else.

I”m not interested in a fight, only a civil discussion, but you”re still not citing evidence to support your assertion that the pilots committed egregious errors.

I am aware that this was always Boeing”s alibi.

First of all, I agree that I only want a civil discussion. Thank you. I just felt that the NYT article was pretty clear about the case of a failure of basic pilot judgment. It is an argument I have been making for several months.

You refer to Boeing’s “alibi”, which while obviously laced with judgment is a term I can understand in this context. Everyone talks about the MCAS and how Boeing didn’t tell anyone about it. Of course. Point conceded. The problem is, to stop there is to look at a very small portion of the events. MCAS is one of a couple of systems on the 737 that use the electric trim. For every single one of them, the failure of the electric trim is solved by turning it off and hand flying the airplane. That’s it. It is not that complicated of a maneuver. In both cases, however, the pilots continued to put the auto pilot back on (In violation of Boeing’s checklists, and this is in both reports) and even more damming is that they left the power at takeoff levels the entire time. They were utterly lost in what was happening and their dependence on automation made the problem more difficult instead of less. Again, I am very uncomfortable criticizing pilots or the dead but I feel very strongly about this.

I’ll put it another way. As a commercial pilot, there are accidents that happen which I find absolutely terrifying. I try to put myself in the place of the pilots and I can’t imagine the difficulty of getting out of the situation. Air France 447, United 232, either of the Malaysia 777 losses all come to mind. We as pilots talk about those accidents a lot, and the tone is always of sympathy for the pilots. In this case, however, the feelings are completely opposite. Pretty much every pilot I know has questioned the pilot decision making in the Lion Air and Ethiopian crashes and wonders why there isn’t a more complete story being told. The NYT article gave voice to something many of us have been saying for most of this year.

We agree that Boeing bears an enormous amount of responsibility, I just don’t think they bear the entirety of it. I think the pilots, and the airlines that hired and trained them, are also at fault.

I’ll leave it at this: I have about 10,000 hours as a pilot in the 737. I would absolutely fly one or put my family on one without any hesitation – provided it was at an airline that I trusted to train its pilots. I wouldn’t let my family on any aircraft flown by Lion Air or Ethiopian. That’s not the entire list of airlines that would be prohibited, but for the purposes of this discussion I think it makes the point.

Good luck. We are obviously both fans of aviation and Airlinereporter.com. I hope we can continue a discussion some other time. I’m sure we can find more things we agree on than we disagree on!

You make some solid points but for me the original sin is that of Boeing.
There”s some new reporting on this by the WSJ this afternoon, btw .

Guys, what about the companies which manufactured the faulty avionics? Did they design their equipment to be fully compatible with other equipment/instruments in the cockpit? Should they shoulder some of the blame?

Thanks for sharing the photos and although it”s all negative for Boeing and the max, it”s nice to see the sea of tails at the famous Renton factory. I flew the MAX and it was an a great plane. Extremely quiet compared to the NG. Once this plane gets back in the air, I hope Boeing will focus on making great quality airplanes and not having to be number 1 and the largest manufacturer of airplanes. We can all agree on corporate greed, but there is a chance to change that and forget about that Wall Street crap

Here’s what concerns me about the Max. The engine cowlings are shaped like airfoils (flat underneath and convex on top. This turns each engine into a “lifting body” which increases as airspeed increases. This was an engineering “fix” to compensate for moving the engines (and their weight) forward. As a lifting body, but without flaps, ailerons, etc., the pilot doesn’t have control over the engine lift characteristics. Instead, Boeing handed that task over to the computerized MCAS system to try to keep the plane stable through using the tail wings. The tendency of the nose to pitch up or down, due to the wonky flight characteristics of the lifting-body engines, is beyond what pilots can control. Unfortunately, the computer systems with their unreliable data input stream are prone to failure at an unacceptable rate. Boeing is hoping to win over public confidence with a dual computer system. What happens when one or the other fails? Which computer system will be determined to be right and what will override the “failing” computer system? Meanwhile, pilots are put in the same position of trying to control an unstable aircraft without the means to do so.

Meanwhile, Airbus and Canadian Bombardier are selling their new A220 aircraft, a short to mid-range aircraft with 2 x 3 seating that’s far more comfortable and less crammed than a B737. Delta is buying them like hotcakes and it’s the plane I want to fly when flying domestically.