The lounge makes heavy use of wood and earthtone materials

Of course there’s a large bar

Subdued lighting at the front desk sets a relaxing vibe

The lounge is huge – 15,800 square feet. Window walls provide views to the west and north, encompassing the runways, the Olympic Mountains beyond, and the tops of the downtown Seattle skyscrapers, all weather permitting, of course – Seattle is famous for its persistent cloud cover. 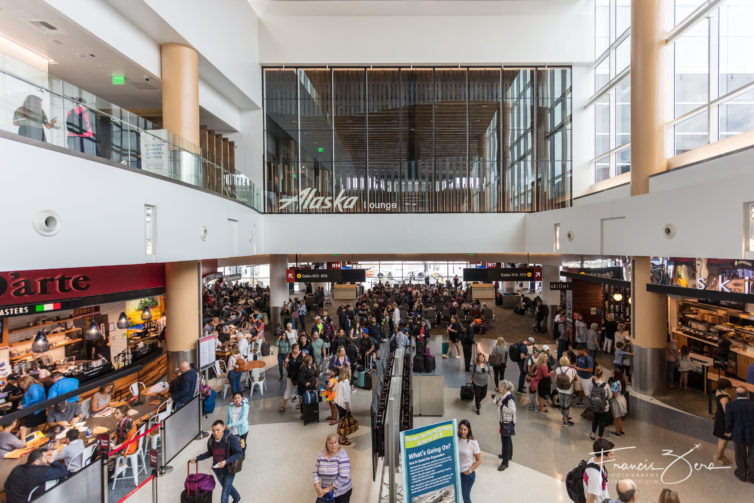 So, what’s it like? It’s shiny new, and, while not in the same league as, say, Singapore’s epic Changi airport, it’s perfectly Pacific Northwest in scale and vibe. 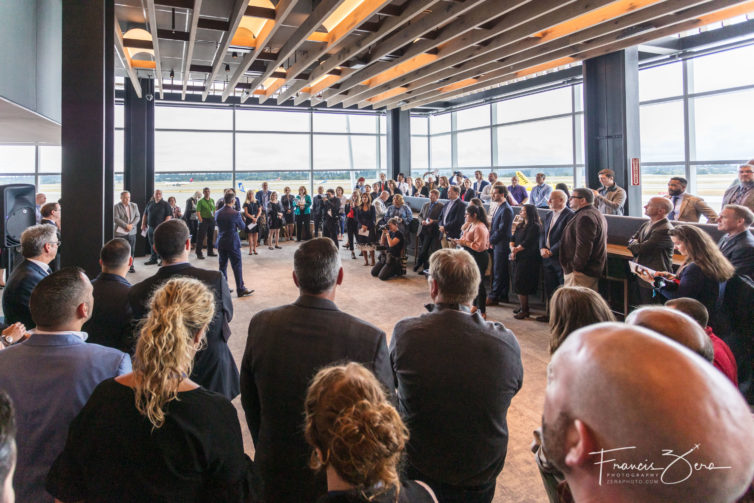 Even stuffed full of dignitaries and media folks, there’s still plenty of room

Once Alaska opens its newest lounge at San Francisco International Airport, it will have a total of eight lounges systemwide, and will have invested $50 million on a combination of new construction and renovations in Seattle, Los Angeles, Portland, and New York JFK. 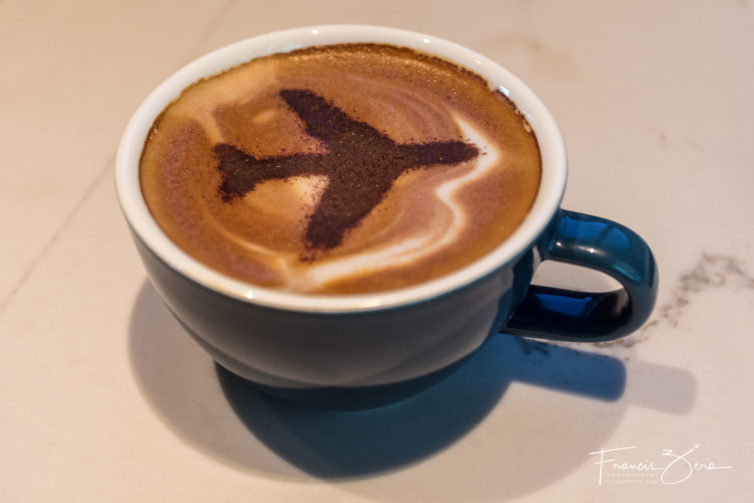 This has got to be the best latte art ever

There’s a large fireplace-centric seating area for relaxing, and plenty of smaller spaces for work or for trying to get a bit of quiet time between flights. The bar offers something close to a dozen microbrews, the coffee bar slings lattes all day long, along with scones and tea for those with a more British bent. 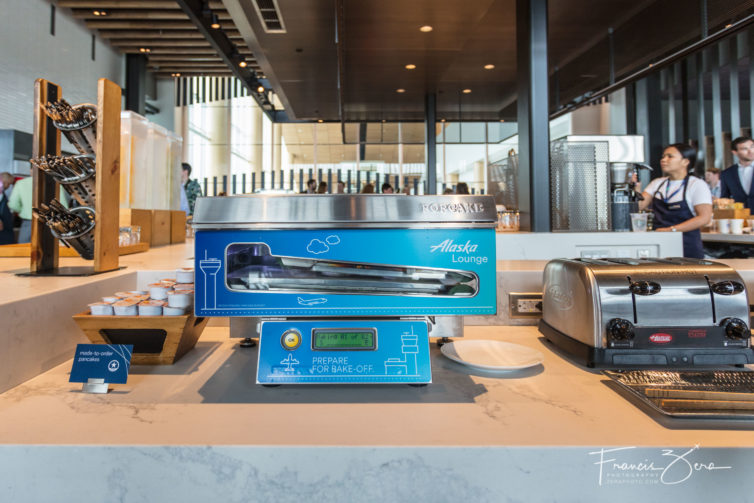 A pancake machine? You betcha

There are plenty of power outlets, WiFi, and flat areas for working or just for setting down your snacks and drinks. 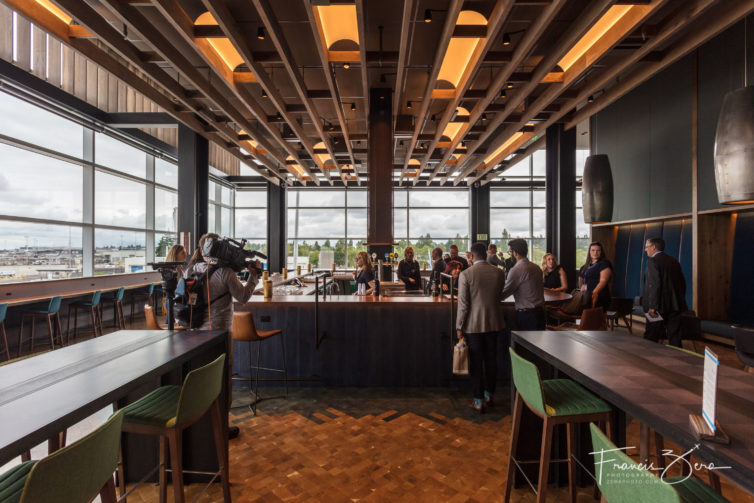 Even on a typically grey Seattle morning, there was plenty of natural light in the space.

This piece represents the region’s forests 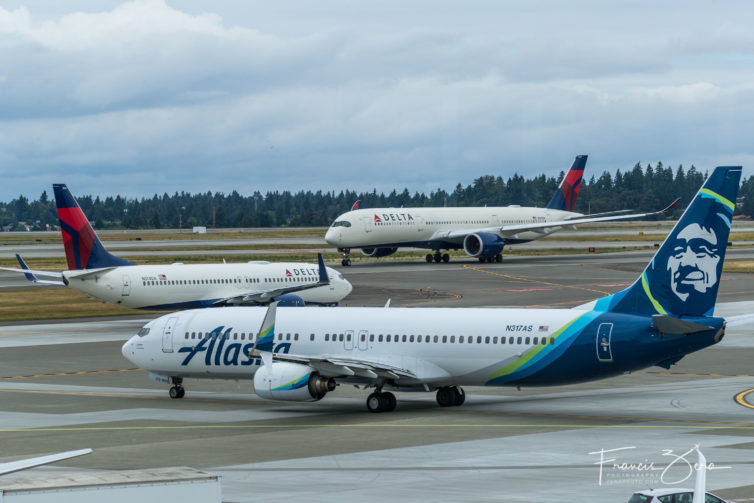 With the huge increases in passengers volumes at Sea-Tac Airport â€” it’s grown from handling 30 million passengers in 2010 to 50 million in 2018 â€” the additional, comfortable space has arrived none too soon.

how does it compare to the Centurion lounge, with it’s delicious food?

I have to take this review of an Alaska product with a grain of salt, considering how die-hard loyalist to
Alaska that the reviewer and AirlineReporter typically are. For example, the new Recaro seats that Alaska has installed? AirlineReporter praised them. I flew the slimlines in Alaska recently (And also got to compare it to the Delta product on the same type- B737-900ER) and found the Alaska product to be vastly outclassed by Delta’s.

Now to relate to this report, I agree with some parts of the review (Such as the views from the A gate Delta SkyClub compared to the views from the N Gate Alaska Lounge) but I find that-in terms of products, amenities, lounge ambiance, etc, Delta provides a vastly superior and more comfortable product for working than Alaska. American Express provides an even better lounge, but overcrowding is a big issue there.

I would place the Alaska Lounge on par with the Hawaiian Lounge at HNL or the Admiral’s Lounge at San Diego… not on the league of the Delta SkyClub (Modernized ones) or the Centurion, which by far surpass it.

Always good to take things with grains of salt :). I won’t speak for Francis, but being based in Seattle and flying on AS my whole life, I admit that yes, they have a special place in my heart. Of course, all airlines have a special place and my heart and we are all a bit biased towards loving them.

However, that aside, the BIG thing I love about Alaska lounges is having a domestic first class ticket gets your entry. As someone who doesn’t have airline status, but who does splurge when the price is right… I love having that access. Oh yea, plus the pancake machines :).

I see where you’re getting from, coming from a city east of Seattle where our only air service is the thrice-daily DeHavillands from Seattle (And the once-weekly ICE deportation flights). Pancake machines are always nice, but I still prefer stuff that is not machine-made.

Your mention of a domestic First-Class ticket also is nice, but it comes with many a restriction. I don’t believe it is valid on any flight operated by Horizon or SkyWest, nor is an award or paid upgrade eligible, as well as certain (Saver) fare classes. Plus, AS just jacked the lounge membership fees.

I do agree on your point that we are all a bit biased that aircraft are the best mode of travel (But that is also a 100% objective point of view.
Railfanners got nothin’ on the AvGeeks)

Thanks for clearing up things for me! AS and DL both have their perks and downsides, after all.